Working live or your life… Part 2 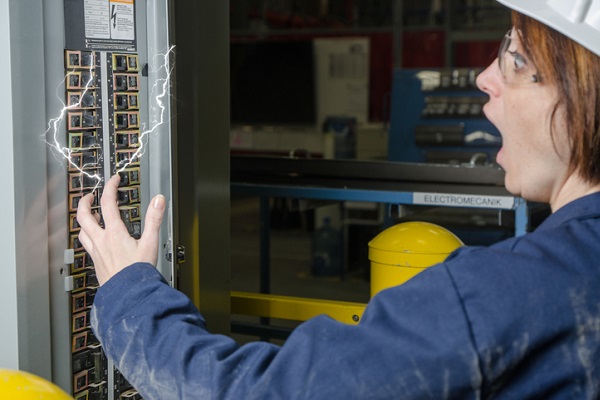 In the summer edition Peter Vandenheuvel focussed on the issues around working live. Here he continues by looking at arc flash incidents, risk analysis and the importance of implementing safe isolation and avoiding working live altogether.

Injuries caused by arc flash and electric shock incidents can both be inflicted almost instantaneously, and by the same source, while both types of injury can be much more severe after prolonged exposure. In both situations though, the physical injuries are usually different.

External electric shock injuries can be almost invisible except at points of contact whereas arc flash injuries will affect at least the parts of the body close to the area of the arc, if not over most of the body in a very unmistakable and much more graphic way.

Not only that, but the shock wave created by the instant vaporisation of all the solid material involved will also obliterate everything in its path. So the blast injuries are three-fold, especially when there is a modest or higher energy level involved:

So not even the most benign-looking task with only miniscule possibility of an arc flash being created must ever be considered, let alone be undertaken.

The risks are highlighted in a typical risk analysis.

Unfortunately, not so when it comes to both live work and arc flash!

Yes, the probability can be reduced considerably by doing certain things but no matter what is done in this regard, the consequences ultimately likely outcome always remains the same; catastrophic!

Regardless of what you do, you cannot reduce the potentially lethal outcome. The worst-case outcome will always be someone very seriously injured or worse, dead.

And even if this of itself may not compel some employers to implement a fool-proof ‘no live work’ prohibition, the consequence of the employer or some staff going to prison for their inaction should be sufficient additional reason to ensure that every person in the organisation understands and rigidly follows your policy and SOP.

The implementation of a safe isolation and not working live policy.

There is no safe answer to doing live work. The sooner those who are not already convinced begin to realise how serious the consequences can be, the sooner the industry will be free of this extreme hazard.

This doesn’t just involve having a policy on the wall or an information session and the odd toolbox meeting topic. Yes, these are all critical in the war against these horrendous injuries, but in addition, it needs company top and middle management to visibly show they mean what they say. How? By getting personally involved and following through with disciplinary consequences that reflect the seriousness of the potential consequences.

I can remember many examples of company CEOs serious about these and other types of incidents, including:

If you think these are unusual or ‘over the top’ reactions, think again.

While both instances resulted in either no or only very mild injuries, they, like all other ‘walk away’ electrical incidents, could just as easily have resulted in deaths at work. Doing live work is like flipping a coin or being asked by Clint Eastwood when staring down his Magnum 45 if you “feel lucky”. Those potential deaths would have been totally preventable, as a coroner will point out quite strongly to the business owners after the event.

A company CEO, should never be too busy to drop everything to investigate any incident where the consequence could be catastrophic, including every near-miss. Only by responding immediately and following through on all disciplinary actions will you get the message through that their lives matter.

Ask yourself this question; “If you had an only daughter or son with a new-born baby working with or for you, would you ask them to work live work?” if the answer is ‘no’ then why should you expect anyone else to do so?

Now, you may think that it’s impossible to implement and have a ‘Zero Harm’ policy in place. But I can assure you there are now many Australian electrotechnology contractors and others completing mega-projects or work as an entire entity for one or more years without an LTI and even some that also have no MTIs during that same period.

And believe it or not; they are actually saving money because their real total cost is lower and their quality of workmanship considerably higher as an outcome.

So what’s in it for you?

Well, for a start, something you can’t put a price on; your life!

Then there are the savings made by not having lost time, reducing or eliminating having to deal with electrical incidents, the automatic flow-on of higher quality work and the minimising or eliminating of rework

Also direct opportunities, not the least that your WHS reputation can lead to more work as a preferred supplier. Yes, never underestimate the potential created by your reputation as a leading reliable, safe and quality driven organisation.

Bury that old myth of everyone only wanting the cheapest price; it is not true. Be honest, do you really want to work for a customer that wants to squeeze the last dollar out of every deal and continually plays you off against your competitors? No! So forget them as anything else than a lifeboat to be used only in case of an economic shipwreck.

What most worthy customers want is a reliable, safe, no-hassle, innovative company. Most know who they would prefer to deal with and a fair price to pay. Now, that doesn’t mean you can expect to just walk in and get the order at any price. But what it does mean is if you present as a reliable and professional organisation, you will get the opportunity to get that fair price. So use your efforts instead to become preferred.

Use your ‘no live work’ and ‘do it once – do it right’ policies to your advantage to create a new standout quality and safety image for your company, both internally and externally. Also, refine your preferred customer list and add more of the ‘willing to pay a fair price’ customers while aiming for that ‘zero harm’ target.

With the right positive approach it will be closer than you think.

Finally a warning: any reader asked or required to do any work with an arc flash risk  or shock risk whatsoever; no matter how small the chance of either occurring – for your own wellbeing you must politely refuse – as it is totally unacceptable for anyone to ask you to put your life at risk.

Lucina found her spark, encourages others to ...