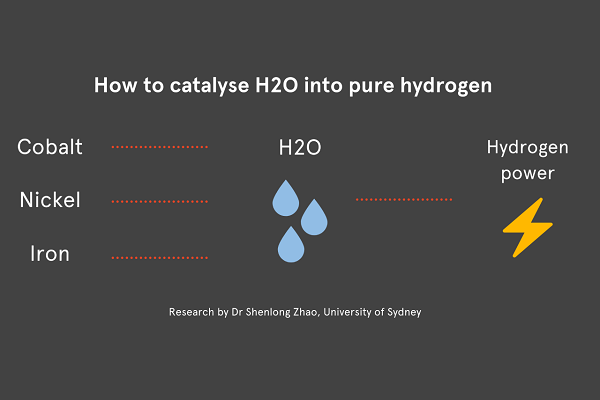 Australian researchers have made a breakthrough in finding a much more efficient means of turning water into rare and valuable pure hydrogen – long heralded as the efficient clean energy alternative.

The promising technology aims to reduce costs associated with hydrogen conversion with LF Loxton Research Fellow Dr Shenlong Zhao saying the team is on the cusp of the hydrogen age and the adoption of large-scale technology brings us within striking distance.

A team of engineers from the University of Sydney have made strides in the development of clean energy storage for hydrogen fuel cells.

A hydrogen fuel cell creates electricity using hydrogen, with water and heat as its only by-products. Hydrogen therefore has the potential to decarbonise industries like aviation and transport. According to Bloomberg, South Korea, Japan and Germany currently lead hydrogen energy development.

The paper detailing the findings has been published in Nature Energy.

“Our team has developed an exciting new catalyst based on iron, cobalt and nickel that can be used to create pure hydrogen,” University of Sydney head of the school of chemical and biomolecular engineering Professor Dianne Wiley says.

The team now hopes to work with a collaborator to build a larger-scale device.