Energy management in a large electric vehicle-charging facility was the task for one Sydney-based electrical contractor. Anna Hayes found out more.

How do you expand a building consisting of offices and a training facility to include a large scale electric vehicle (EV) charging station without upgrading your supply? 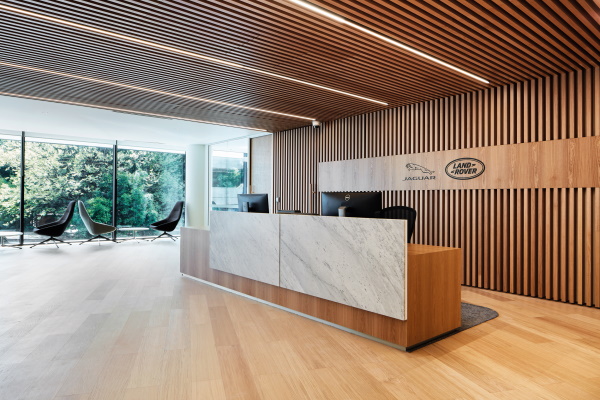 Sydney contractor PM Electric was given that very task at the Jaguar Land Rover (JLR) training facility in Alexandria, NSW, where JLR provides training on its new range of E-Pace electric vehicles.

The global EV market continues to grow but the uptake has been slightly slower in Australia, with the country accounting for just 2,216 of the 2.1 million EV sales in 2018. Promisingly, in the first half of 2019, the sales figures were 90% higher than the same period in 2018.

Despite the lack of national policy or strategy for EVs, the formerly sceptical consumer attitudes have also changed with interest in EVs rising.

Car manufacturers like JLR have responded to that growing interest.

According to a NECA Excellence Awards submission, the early design and maximum demand calculations were cause for concern.

“[The calculations] recognised that the site for JLR was not suitable for the loads JLR required from the electricity grid. To overcome this supply shortfall, we looked at the operation characteristics of the business to come up with a plan of attack to control the load, so JLR could operate successfully with zero impact on the business operations,” says director Peter Murray.

The major load for JLR was the 630A new distribution board to supply 15 7KW or more EV charging systems. However, the building SDP on the main switchboard was limited to 1,200A. This was the largest charging system of its kind at that point in time.

To limit the major load the EV system put onto the building’s electrical system and distribution network, PM Electric partnered with Schneider Electric and Jet Charge to design and install an energy management system.

They used a Schneider PLC and Jet Charge’s EV charging control software platform, Chargefox, to control the use of the EV chargers at all times. The system was able to monitor the building loads on all switchboards through JLR.

“This enabled the building measurements to be recorded and, in turn, assess the available load head room to turn on EV chargers to the cars as required,” Peter says.

Each car takes around six hours to charge and is parked overnight. The building peak loads were reduced to allow for the EV chargers to be enabled at this time. The energy management system works 24/7; the EV chargers would work independently if charge to the EVs was required during the peak and there was available load.

On all three floors, services were fed from under-floor through the concrete slab.

“During the first two weeks, we had the site surveyed to plot grid reference marks. These grid references played a major part in the initial set out for all 300+ core holes to be assessed by engineers and approval provided to penetrating the slab. Quality control of the set out was maintained using grid reference lines by surveyors, to allow for exact set outs.”

In terms of energy and efficiency, LED luminaires were installed throughout the JLR fit-out.

In addition, a hybrid lighting control system was designed and installed. This incorporated a Philips Dynalite control system for all meeting spaces and ground floor showroom and workshop. They also installed, in the open office areas, a standalone PIR microwave system, redesigning the PIR sensor locations and adding many more to the spaces.

“By adding more sensors we could achieve a lighting control system that only operates on detection rather than having pre-determined lighting schedules that turn lights on in spaces unoccupied.”

PM Electric also added the Earth Hour program to the Dynalite control system. Earth Hour is a worldwide movement which encourages the switching off of non-essential electric lights.

The project received a commendation in the ‘Commercial – Small’ category at the 2019 NECA National Excellence Awards, having won the NSW award in that category.