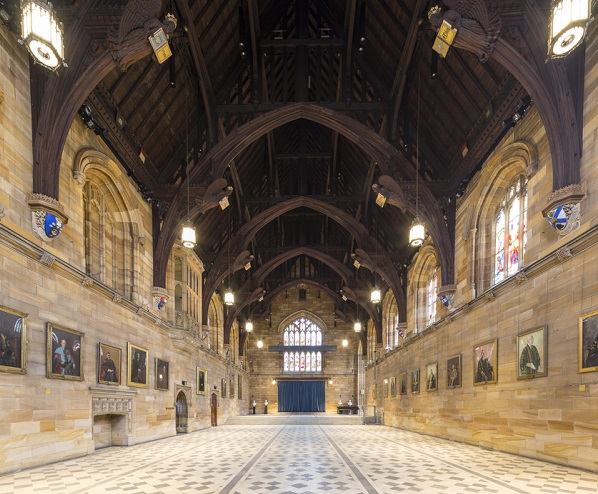 In 2017, Sydney-based electrical company Elam Cabling Group was awarded the tender to refurbish the interior lighting of Sydney University’s Great Hall. Cameron Grimes takes a look at the challenges the company faced completing the project.

The Great Hall of the University of Sydney is one of the more striking features of Australia’s first tertiary establishment. However, an upgrade to its interior lighting was high on the agenda.

Opened in 1859, the Great Hall’s last lighting upgrade was completed in the 1950s, resulting in a significantly outdated lighting setup compared to other university event spaces.

In 2015, alumnus professor Barry Webb AM put forward a detailed proposal to upgrade the hall’s lighting. At the time, the university lacked the funds to complete such a project, until a generous $600,000 donated during the university’s annual fundraiser helped secure the amount required.

The project was headed by Elam project manager Lyn Evans, who was given five weeks to install 156 new, digital multiplex (DMX) controlled LED lights, as well as refurbish the 15 existing heritage lights.

Lyn says that the project involved an extensive amount of research, but the time allocated by the University eased a lot of the stresses involved.

“The client awarded the project to us early so this gave us plenty of time to visit suppliers,” Lyn says.

“The client was very helpful in allowing us access to the Great Hall prior to the physical start. As head contractor, I ensured that I had open and quick communication with consultants, suppliers, clients and staff.”

As part of the refurbishment process, the 100-year old heritage lights were shipped to an external site to have metalwork repaired and DMX lights retrofitted into their fixtures.

The remaining DMX lights were set on lighting bars perched in the timber roof. The structural timber of the hall has been warped with age, which required each lighting bracket to be custom bent by Elam on site.

For this task, one of Elam’s own team members brought their father’s 12-tonne press to the worksite.

Lyn says because of it age, specific heritage considerations had to be taken into account when installing the new lighting.

“The building, especially the floors and walls, have been damaged by careless actions. We could not allow any further damage to take place,” Lyn says.

“However, we also needed to install lighting bars into the top of the sandstone walls and lighting mounts high into the timber roof.

“We had to come up with a mount that avoided the ornate timbers, but did not put any stress on the structural timbers.

“All of these solutions had to be passed through the Heritage Committee.”

Elam faced a number of challenges during the installation, and had to adapt a “design on the go” approach due to a number of issues with the hall itself.

Along with the warped timber, there were issues surrounding inaccuracies in the hall’s roof dimensions, as well as new cable pathways being visible against the hall interiors.

To resolve the cabling issue, pathways were colour matched with interiors and placed high in the roof top. Emergency lighting was chosen to accommodate for the hall’s specific size and height and were then hidden within the artistic panelling.

Spider and scissor lifts were required to reach the ceiling of the Great Hall, which were squeezed through the hall’s front door with millimetres to spare.

“We had to work up to 18m in a small bucket with heavy objects,” Lyn says. 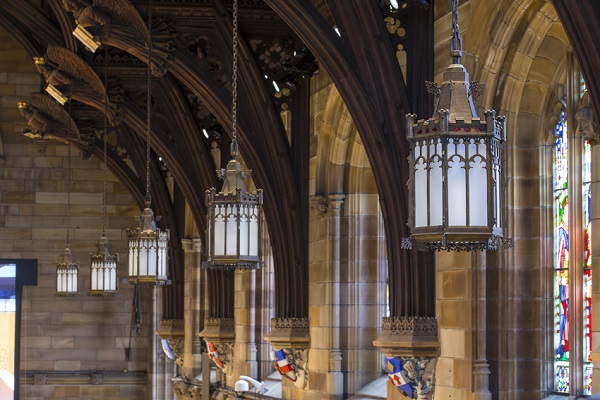 To overcome this issue, Elam employed a specialised lift operator for the duration of the refurbishments. While several of its team members are licensed to operate lifts, the cabling and conduit works would have taken considerably longer.

The five-week time constraint Sydney University had allocated to Elam was the biggest challenge of the project.

“We overcame this by ensuring staffing levels and suppliers knew exactly what was expected of them and regularly communicating with them,” Lyn says.

Having one person focused on the movement and operation of the four lifts saved the company a significant amount of time during refurbishments.

Because of her previous experience working on other Sydney University buildings, Lyn says this helped her prepare for the expected and unexpected situations that arose.

“I had to lean on all my 30 years of experience in construction when I was preparing the tender,” Lyn says.

“I have worked on several heritage buildings over the years, a few of which were also at Sydney Uni, so I knew what challenges laid ahead. I knew that we would be up for surprises but I had confidence in my team.

“I knew that if we won the tender, I personally would be needed onsite everyday, which is what happened.”

Elam has been working with Sydney University since 1998, with several sections of the campus’ quadrangle building being refurbished by the company in the past.

The Great Hall lighting project was a closed tender, with Elam being awarded the tender based on its response and fixed price. Elam was one of three companies asked to submit pricing based on the lighting design of engineering consultants Steensen Varming.

Lyn says it was simple to determine a fixed price for the refurbishment due to Elam’s previous experiences with Sydney University.

“Having the experience I do in the industry served us well when we were in the construction phase,” Lyn says.

“I also have great suppliers which I treat well. I knew I had excellent communication skills and would need to keep thinking ahead and immediately actioning issues as they arose.

“So, for the tender pricing, I simply built the ‘unexpected’ activities.”

As part of the refurbishment, the Great Hall’s pipe organ required temporary removal. This poised another challenge, as the electronic section of the organ had never been previously documented.

Lyn credited Elam’s site manager, Imitaz Ali, with the team’s successful reinstallation of the organ’s electronics once refurbishments were completed.

“This is where my site manager really showed his expertise,” Lyn says.

“He immediately got to work documenting the required wiring, checking voltages and ordering new gear to fit into the new DIN Rail section of the new DB we had installed.

“The day of testing arrived and we had the organist in to ensure all functions of the organ worked.  We were all relieved to hear the organ in full working mode.

“The University now has all the documentation required for maintenance on the electronics of their organ.”