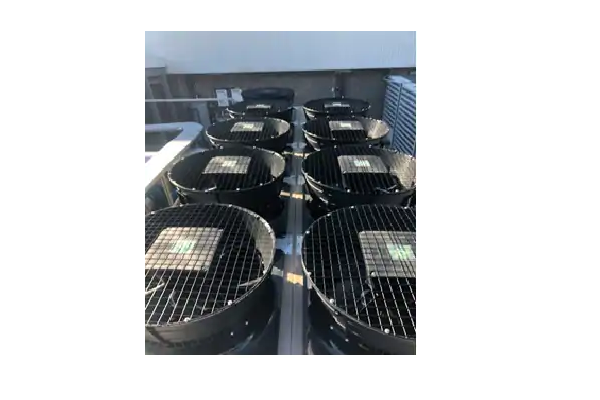 Johnson Control, in partnership with Spotless, has delivered an energy efficiency upgrade to one of the YORK air cooled chillers at Roma Mitchell Secondary College in Adelaide, SA. The upgrades to the air chiller condenser fans will make them high-efficiency EC fans.

This retrofit is one of the first projects of its type and comes as part of Johnson Control’s ‘Wave’ project, a research-led initiative to drive industry innovation.

The large campus had two side-by-side YORK YCIV air cooled screw chillers that hadn’t been factory fitted with the latest EC fan technology. As Johnson Controls was already contracted to manage the onsite YORK chillers for the school through Spotless, the EC fan retrofit upgrade was an ideal opportunity to demonstrate energy efficiency proof of concept by upgrading one of the chillers with the new fans.

As a test project, the upgrade would allow Johnson Controls to compare the results and if successful, set a new industry benchmark for increased energy efficiency and noise reduction levels.

A total of nine EBMPapst EC fans were installed on one of the school’s air cooled chillers, which was controlled using Johnson Controls Metasys building management system at a localised level to the chiller.

Metasys was able to control the EC fans using variable voltage and automated speed control functionalities. For further performance enhancements, the fans can be operated either individually or as a bank of fans depending on the operational requirements at any given time.

Johnson Controls designed the control strategy to ensure the chiller remains operating at a constant peak performance range. To ensure this is achieved, a second sensor was installed adjacent to the existing sensor that feeds the PID loop and controls the speed of the condenser fans, supplementing the system if required.

It resulted in 49.7% energy savings when compared to the original system, approximately 252,000kW over a 12-month period.

Additionally, it demonstrated performance improvements too with the chiller operating better under extreme hot weather at or close to full load conditions.

According Spotless Group HVAC&R technician Ben Sergi, the fans appeared to have no issues operating through the warmer period: “There were no high motor temperature cut-outs and the compressors did not appear to go into limiting mode. Regarding capacity, the chiller that had the EC fan motors installed seemed to deal with the high ambient temperatures better than it used to.”