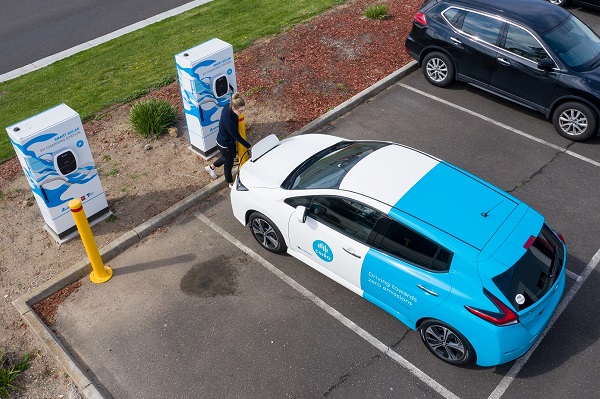 Funded by the Victorian Government and in collaboration with Nissan Australia and Delta Electronics, he charging stations were developed with the Australian household in mind, overcoming challenges associated with EV charging including extreme temperatures in the hottest parts of summer.

Multiple vehicles can be charged at the same time in areas with limited access to grid power such as public car parks and garages.

Lead researcher from CSIRO’s centre for hybrid energy systems Dr Christopher Munnings says that up to 90% of EV charging was likely to take place in the home.

“A normal household battery system is typically not powerful enough to charge a car on a hot day as it can overheat and slow down,” Christopher says.

“We’ve devised a way to manage the temperature of the battery, minimising the amount of power required from the grid.”

A home with more than one EV will automatically monitor each vehicle and spread the load accordingly.

“This means the cars charge as quickly as possible, using as much sun as possible, without the need to upgrade grid connection. This technology could accelerate the widespread rollout of EVs across the country,” Chris concludes.

Three solar charging modules have been installed at Nissan Headquarters in Dandenong, each with the ability to charge four vehicles at a time. It will be tested and evaluated over 200 days, throughout the entire Victorian summer.