Features
Home›Features›Putting the heat on storage

Putting the heat on storage 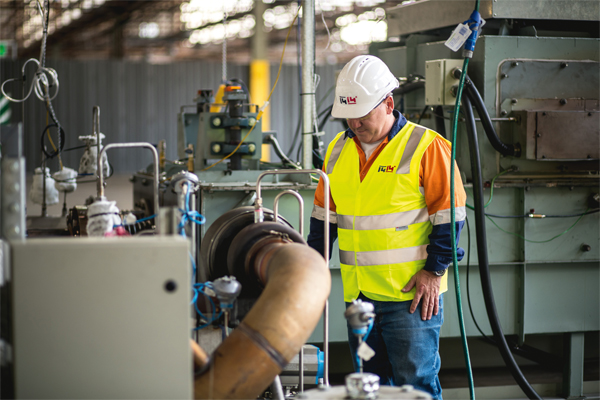 Silicon has recently been used as the key material behind technology that stores electricity as thermal energy. Simeon Barut explains.

The innovation is called the Thermal Energy Storage System (TESS), which uses electricity to heat silicon containers and then recover the energy stored to make electricity and heat.

Silicon is a key part of the technology and probably the most unique as it allows itself to get to a very high temperature – 1414oC to be precise – before it melts and enters the ‘latent phase’.

1414 Degrees chief technology officer Matthew Johnson says the design aims to store excess electricity by convertingh it to heat. When needed the heat will be recovered and used to provide electricity and heat for industrial purposes

“The base principle of the technology is if renewable energy gets more penetration into a grid or particular site, you tend to have periods where you spill a great amount of energy. What our TESS aims to do is store the excess and allow it to be useable when necessary, rather than having it be wasted,” says Matthew.

“There are a lot of reasons why we use silicon as the key material. Firstly, the latent phase is very different to other materials. For example, if you’re boiling a billy over a campfire, you’re providing a relatively constant amount of heat to the bottom surface. When the water gets to 99.9oC, it absorbs energy but doesn’t start boiling until there’s enough energy absorbed to facilitate the phase change. That chunk of energy is called latent heat.

“Silicon responds well as it changes from a solid to a liquid and uses that transition to store the thermal energy, which is what we do.”

What sets 1414 Degrees’ silicon design apart is the effectiveness of silicon and how it works differently to lithium-ion batteries. Most batteries act as chemical stores, which involve putting energy in and changing the chemistry within the battery. This is reversible if the original energy is retainable.

Matthew explains that the benefits of using silicon are two fold; its price point and the division of heat.

“One of the reasons we developed this technology is because we can scale it much larger than what is normally considered a sensible market for batteries. In doing so, we can achieve a different price point. The bottom line here is that storing electricity as thermal energy and then recovering it to get power and heat is much cheaper than storing an industrial amount of power with a different type of battery,” says Matthew.

“The other reason is that once the energy is stored, there are a number of ways to turn that into power. A stirling motor or gas turbine – which are bigger plants – generate heat at about 50% efficiency and the smaller ones only give off about 30% electricity and 60% heat. Whereas what we can do is store that electricity when it’s not needed and meet a demand within a 24-48 hour cycle if need be. Being versatile is definitely one of our key advantages.”

Due to the renewable energy market growing exponentially, 1414 Degrees are in a position where they can make an impact on solar storage – the more storage units there are, the more generation of solar power there can be without having to waste it.

“This is all about generating as much power as you can when there’s wind and solar available, storing it and then using it efficiently when it’s not as available,” Matthew says.

“From an engineering point of view, it’s the sort of product that can make a big difference if implemented properly and that has been a key motivation for me and my team.”