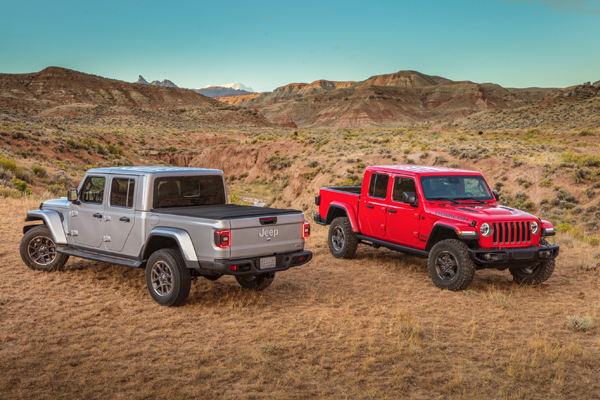 For something a little bit different on the jobsite, Jeep has finally revealed its long-awaited new ute – known as the Gladiator – which is the legendary off-road brand’s first tray-backed model in two decades and has a heritage stretching all the way back beyond past episodes of M*A*S*H to the 1947 Willys-Overland Jeep Pickup.

Expected on sale in Australia in the first half of next year, the Gladiator is billed as “the most capable mid-size truck ever” and will come with all of Jeep’s rugged off-road credentials and tick plenty of boxes as a workhorse with a 3.5t towing capacity and circa-725kg payload for the dual cab.

The tailgate is damped, capable of stopping in three positions and is integrated with the central locking system.

An attractive proposition for mixing work with weekend recreational pursuits, the Gladiator makes a major departure from its mid-size ute rivals with Wrangler-style features such as a soft-top roof (a removable hard top is optional), fold-down windscreen, removable doors and fold-up rear seats that offer extra storage and can be swapped out for an optional lockable container – most of this enabling ‘open-air freedom’ for the occupants.

Australian specifications are still to be revealed, but in the US the Ohio-built Gladiator will be offered in Sport, Sport S, Overland and Rubicon model grades with a choice of petrol or diesel engines: a 213kW/352Nm 3.6L Pentastar V6 with six-speed manual or eight-speed auto; and a 194kW/600Nm 3.0L EcoDiesel V6 with eight-speed auto only.

For all its ruggedness, the Gladiator will come with plenty of mod-cons such as a fourth-generation Uconnect infotainment system (including Apple CarPlay and Android Auto connectivity) and the choice of 7” or 8.4” touch screens with pinch-and-zoom capability.

We like the weather-proof detailing on switchgear such as the push-button start, while Jeeps says the ute is packed with more than 80 safety and security features – not all of which will be fitted standard – including a forward-facing off-road camera, blind spot monitoring, rear cross path detection, adaptive cruise control and electronic stability control with electronic roll mitigation.

All this equipment and the heavy duty nature of the vehicle – big steel bumpers, thick-gauge tubular steel rock rails on the bed corners (and elsewhere) and four undercarriage skid plates and bars are all noted – sees kerb weight come in at around 2.2t, which is about par for this category.

To keep weight down and help keep a lid on fuel consumption, Jeep engineers have applied lightweight (but high strength) aluminium on the doors, hinges, bonnet, fenders, windshield frame and tailgate.