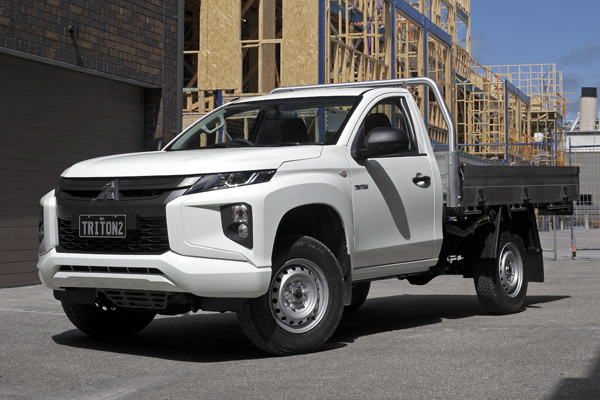 Mitsubishi has launched its heavily updated new Triton one-tonne utility range in Australia, which brings a dramatic new look, various mechanical improvements, a big increase in safety and cabin convenience features and, for a limited time, an extended warranty that runs to seven years or 150,000km.

The overhaul comes midway through the lifecycle of the fifth-generation MQ-series Triton, which continues with a comprehensive 20 variants spanning single, extended (Club) and dual cab body styles, cab chassis and pick-up rear ends, petrol and diesel engines, 4×2 and 4×4 drivelines and model grades based on GLX, GLX+, GLS and new GLX Premium lines – all now looking more aggressive with the wide ‘dynamic shield’ front styling planted in front of the higher (by 40mm) bonnet.

Under-the-skin highlights include a new six-speed automatic transmission on the ‘4N15’ 2.4L four-cylinder turbo-diesel engine, replacing the previous five-speed unit and bringing a variety of benefits including reduced noise, vibration and harshness (NVH).

The diesel engine, which has Mitsubishi’s MIVEC valve timing system and a variable geometry turbocharger, carries over largely unchanged, producing 133kW of power at 3,500rpm and 430Nm of torque at 2,500rpm. Fuel consumption has increased slightly, though, due to factors such as the revised gearing and extra equipment on board.

A six-speed manual remains available on the diesel, while the 4×2 single cab at the entry level of the range sticks with the 94kW/194Nm 2.4L four-cylinder petrol/five-speed manual combination.

Mitsubishi is promising improved all-terrain performance in Triton 4×4 diesel models – both manual and auto – that have the Super-Select 4WD-II system, owing to the addition of a new ‘Off-road Mode’ selector that offers specific settings for gravel, mud/snow, sand and rock conditions.

There are no wholesale changes to chassis hard points such as the double wishbone front and leaf spring rear suspension and front disc/rear drum brake configuration; however, Mitsubishi Australia did play a role in the new Triton’s engineering development and the suspension tuning.

The company says adjustments at the rear end have brought more comfort on bitumen roads and improved directional stability on dirt, while models with 18” wheels were targeted for a lift in braking performance and brake pedal feel.

Extra reinforcements have been applied in the engine compartment surrounds and in the chassis frame, cab and cargo bed joins to improve the Triton’s rigidity, while new sound-proofing materials (absorbing noise and vibration) have been installed, with the result being a quieter and more comfortable cabin environment.

On the safety front, the new Triton ushers in a number of advanced driver-assist systems, including forward collision mitigation that can detect pedestrians as well as other vehicles, blind spot warning (with lane change assist) to help when changing lanes, rear cross traffic alert that checks for cars and pedestrians behind the vehicle, and an ultrasonic miss-acceleration mitigation system that will automatically halt the ute in its tracks if it detects that the driver has accidentally hit the accelerator rather than the brake.

There is also now an ‘ADAS’ grade on select GLX variants, denoting the Advanced Driver Assistance System that includes a number of the new driver-assist functions and other equipment like dusk-sensing headlights, rain-sensing windscreen wipers, an auto-dipping rear-view mirror and front fog lights.

In the cabin, Mitsubishi has left almost no stone unturned, updating the interior to provide a more upmarket feel with improved comfort and functionality. Depending on the variant, there are new soft-touch materials, thicker-gauge laminate, metallic trim elements, a sportier colour scheme and fine detailing such as double stitching on the doors, console lid, knee touchpoints and park brake lever.

Trays are now used at the bottom of the centre stack and at the rear of the console, where a USB charging socket is also now installed as part of a range of measures in the dual cab designed to improve rear-seat passenger comfort.

Prices have increased on most model variants in line with the extra equipment, but Mitsubishi is confident buyers will be drawn to the wide-ranging improvements made across the range.

The 4×2 petrol manual GLX single cab chassis still opens proceedings at $22,490 plus on-road costs, while the 4×4 diesel auto GLS Premium double cab pick-up – which replaces the Exceed – sits at the top of the pile at $51,990 plus on-roads.