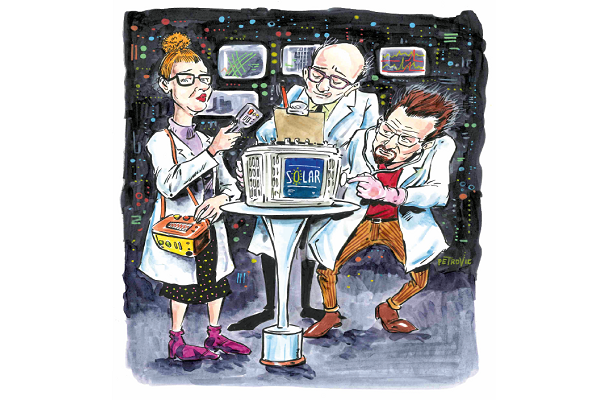 An extensive trial on solar battery storage systems is currently underway, conducted by ITP Renewables. These are the results from its latest public report.

The size of the Australian solar storage market has grown rapidly in recent years, a trend that is projected to continue, both due to declining retail prices and the introduction of multiple state government-supported subsidies.

Projections for future uptake generally all assume growth. In a recent report, Bloomberg New Energy Finance (BNEF) estimated that 70,000 Australian households would install battery storage in 2019, making it the largest home battery market in the world. The Smart Energy Council estimates that 150,000-50,000 energy storage systems could be installed by 2020.

Supported by an $870,000 grant from the Australian Renewable Energy Agency (ARENA) under its Emerging Renewables Program, the Lithium Ion Battery Test Centre involves performance testing of conventional and emerging battery technologies. The aim of the testing is to independently verify battery performance (capacity fade and round-trip efficiency) against manufacturers’ claims.

Under the initiative, ITP Renewables (ITP) is testing the performance of residential and commercial scale battery packs in a purpose-built, climate-controlled enclosure at the Canberra Institute of Technology. Six lithium-ion, one conventional lead-acid and one advanced lead-acid battery packs were installed during Phase 1 of the trial. The trial was subsequently expanded to include an additional eight lithium-ion packs, a zinc bromide fl ow battery and an Aquion ‘saltwater’ battery bank.

A summary of results

Round-trip efficiency between 85-95% has been observed for both the lead-acid and lithium-ion technologies, while linear extrapolation of capacity retention to date suggests that between 2,000 – 6,000 cycles can be delivered by properly functioning lithium-ion battery packs.

Unfortunately, many battery packs installed in the Test Centre have had to be removed or replaced prematurely owing to faults. These issues are symptomatic of new technology and a new market, and are expected to improve over time.

With respect to the market at large, price reductions have stalled in recent months owing to production constraints and high raw material prices. Nevertheless, most analysts predict that manufacturers will substitute away from high cost inputs, and that the large amount of production capacity currently under construction will put downward pressure on prices in the medium-term.

CALB CA100 – The CALB capacity test cycles continue to show that the external battery management system (BMS) is cutting off charge cycles before the maximum state of charge (SOC) setpoint is reached. Pack voltage appears to reach its upper limit while the SOC estimated by the external BMS remains low. The CALB pack still cycles acceptably, but the issues create significant variability between discharge cycles and it is generally unclear how much of the pack’s actual residual capacity has been discharged in any one cycle.

Ecoult UltraFlex – In September 2017, EcoUlt removed some underperforming battery units from the Test Centre for analysis and identified that the BMS
was allowing some cells to stray beyond their minimum SOC limits for extended periods, accelerating capacity fade. EcoUlt updated its SOC algorithm and replaced all batteries under warranty. Cycling of the new batteries commenced in January 2018.

From May onwards, the new pack was unexpectedly low on capacity, failing to cycle down to the target 30% SOC due to low voltage cut-off. EcoUlt attributed this loss of capacity to over-discharging caused by incorrect SOC estimation, and believes that the effect has been exacerbated due to the unusual cycling regime employed at the Battery Test Centre. EcoUlt has subsequently updated the algorithm and conducted maintenance cycles in an effort to restore as much lost capacity as possible.

Despite this, EcoUlt has communicated to ITP that the battery capacity has been permanently damaged and that it will be replacing all batteries.

The opposite is true during charging, where the SOC rapidly adjusts upwards. Due to the poor charge acceptance of conventional lead-acid batteries in the absorption charging phase, and the low allowable depth of discharge (DOD), the GNB lead-acid battery pack has completed only ~480 equivalent full cycles over the course of the trial. Moreover, these cycles are inconsistent owing to the SOC estimation issues described above.

Kokam StoraXe – In early November 2016, the StoraXe battery pack containing the Kokam battery cells and ADS-TEC BMS produced an error code indicating that the battery pack had entered a low voltage protection mode, whereby contactors on the BMS open to protect the battery from further discharge. ITP inspected the pack and found a pack voltage of 44.6V. With no ability to manually close the contactors and allow the inverter to charge the battery pack, the manufacturer advised that the battery pack would have to be charged manually using a constant 50VDC voltage source (max 20A current), until the charge current decayed to 5A.

ITP was also advised that the cells would not discharge further, and the system could be left online to allow for remote diagnostics by the manufacturer. When ITP arrived to site to manually charge the pack the following week, the pack voltage had fallen from 44.6V to 6.8V. It appears that during the intervening period,
re-energising the BMS drained the remaining energy from the cells, causing them to over-discharge. Once lithium-ion cells fall below some minimum voltage they cannot be recharged owing to increased risk of a short-circuit across battery electrodes.

Due to this early failure, insufficient cycles were completed to provide meaningful results.

LG Chem RESU 1 – Throughout the trial the LG Chem RESU battery has exhibited temperature de-rating in hotter conditions. This was attributed to the high charge/discharge rates used in the trial, coupled with the battery pack’s high density and lack of active cooling mechanisms (i.e. fans, coolant loops, etc).

Throughout the summer temperature regime of 2018/19, the LG Chem RESU shut down multiple times, with the BMS reporting both over-temperature and cell imbalance faults. The periodic shutdowns interrupted cycling and in February 2019, LG Chem communicated that the battery pack should be returned to the service centre due to the cell imbalance. The pack has since been replaced by LG Chem, albeit with a newer model (LG Chem’s second generation RESU10) as the original LG Chem RESU is no longer in production. The replacement battery is yet to be installed.

Samsung AIO10.8 – The Samsung AIO10.8 has completed a high number of cycles due to high reliability. No operational issues have been experienced during testing.

Sony Fortelion – The Sony pack has completed a high number of cycles due to high reliability. No operational issues have been experienced during testing.

Tesla Powerwall 1 – At the beginning of the trial, Tesla’s Powerwall 1 was only compatible with a Solar Edge inverter. All other Phase 1 packs, excluding the Samsung, were compatible with the market-leading SMA Sunny Island inverter, which the control system had been designed to control.

While ITP was able to control the Solar Edge/Powerwall system via an online portal, the rate of charge and discharge was not able to be controlled. Hence, the Powerwall 1 is charging and discharging at its maximum rate (~2 hours full charge/discharge) while other batteries charge and discharge over ~3 hours. This means the Powerwall has less time to dissipate heat built up during charge/discharge, which may be causing higher battery cell temperatures leading to accelerated capacity fade. Efficiency may also be affected, as the Tesla’s cooling system will be more heavily loaded.

ITP is unable to confirm these hypotheses as the Tesla system allows for no data access. Nevertheless, the Tesla Powerwall 1 has proven highly reliable and, in conjunction with the high allowable DOD, this has allowed the battery pack to have completed the high number of cycles. No operational issues have been  experienced during testing.

Alpha ESS M48100 – During the 2018/19 summer temperature regime, ITP observed that the Alpha battery pack was constraining the charge and discharge rate below the rate requested by the test centre’s control system. Alpha has stated that this behaviour is abnormal, and collected the battery pack for analysis in March 2019. ITP understands that the battery pack being tested in the trial is no longer a current model.

Ampetus Super Lithium – ITP encountered difficulties with commissioning of the Ampetus battery pack. As cycling continued the pack continued to demonstrate issues with reliability, frequently shutting down and requiring cell re-balancing. ITP understands that these issues are not isolated to ITP’s battery pack, and that Sinlion were not willing to honour their product warranty with regards to this fault.

Ampetus was forced to bear this liability with its Australian customers and subsequently went into receivership in May 2018.

Aquion Saltwater Battery – Aquion’s bankruptcy in early March 2017 continues to leave ITP without support for final commissioning of the battery bank with the Victron inverter. ITP has set all parameters detailed in existing documentation but is unable to complete commissioning.

Although Aquion was bought out in July 2017, it is not supporting existing products in any way, and all existing warranties are void.

BYD B-Box – ITP has not experienced any operational issues with the BYD battery pack.

GNB Lithium – ITP has not experienced any operational issues with the GNB Lithium battery pack.

LG Chem attributed this to swelling of the battery cells, which can occur when the voltage drops too low, although LG Chem did note that it normally occurs at a lower voltage than what was experienced by the battery pack in question. The battery pack was replaced by LG Chem.

Pylontech US2000B – ITP has not experienced any operational issues with the Pylontech battery pack.

The first replacement was due to contaminated electrolyte.

Redflow attributed the leak to a step in its manufacturing process in which the electrolyte tank was washed with a particular soap after manufacture, causing brittleness in the plastic and therefore increased risk of cracks. This apparently only affected a specific batch of products.

The previous leaks were attributed to micro-cracking of the electrolyte tank that occurred during road transport. The problem identified was that the electrolyte trays were not sufficiently supported on the sides to withstand the weight of the electrolyte. Redflow states that it has since modified its transport techniques and believes this problem will be avoided in the future.

SimpliPhi PHI 3.4 – In the Battery Test Centre Report 5 – September 2018, it was noted that ITP was awaiting replacement of the SimpliPhi batteries after SimpliPhi advised ITP that the original inverter setpoints were no longer consistent with their operating guidelines, causing the battery pack to
be cycled beyond what SimpliPhi now considers to be 100% DOD.

After picking up the original batteries in September 2018, Simpliphi has since chosen to issue ITP with a refund rather than replace them.

Tesla Powerwall 2 – In September 2018, the Tesla Powerwall 2 identified a ‘welded relay’ fault. Tesla suggested that this may have been related to the burnt-out terminal block discovered following installation, although this was not confirmed and it is unclear what caused the fault. Both the Powerwall 2 and associated Gateway were subsequently replaced by Tesla.

Cycling of the replacement Powerwall 2 commenced in late November. ITP still has no direct control over the battery (as Tesla does not allow this level of control of its products), but rely on Tesla to implement the cycling schedule. Monitoring of Tesla Powerwall’s is only possible via mobile app. Tesla is yet to publish a local API for direct access to data.

The Battery Trial project has so far been invaluable in providing information on the state of battery products and the market more generally to consumers. Although a number of batteries experienced operational issues or failures, others had none and have also performed very well in terms of efficiency and capacity retention. ITP also notes that: