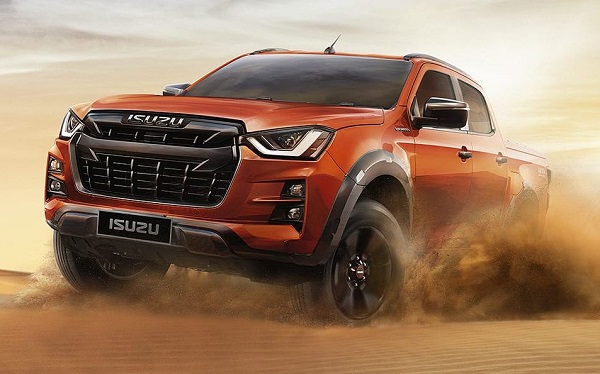 Isuzu has unveiled its fully redesigned D-Max one-tonne ute overseas ahead of an expected Australian launch around mid-2020.

Isuzu Ute Australia is maintaining its focus on its current model range, so local specification and other details remain undisclosed for now.

But the new D-Max’s unveiling in Thailand, where it is built for Australia and other markets and in this third generation will share its underpinnings and much componentry with the next Mazda BT-50, shows the Japanese brand has used the changeover model to push it upmarket with higher levels of technology and cabin amenities – all the while maintaining the familiar 3.0-litre turbo-diesel engine under the bonnet.

Whereas the current model is widely regarded as a solid, no-frills workhorse, the redesign brings a distinctive and clearly more sophisticated wedge-shaped look and, at least on higher-spec variants, more advanced systems increasingly expected in this segment such as blind spot monitoring with rear cross traffic alert, and LED headlights and tail-lights.

The dashboard is dominated by a 9.0-inch central touchscreen with Apple CarPlay and Android Auto smartphone mirroring capability and voice recognition. There is a digital panel for the dual zone climate control system positioned underneath, and sitting prominently behind a new multifunction steering wheel is a redesigned instrument panel with backlit gauges and large 4.2-inch colour trip computer display.

Isuzu says the interior design aims to “enfold the driver and passenger as if they were in a cockpit of an airplane” and reinforce the classy, sporty feel with high attention to detail in areas such as embossed and textured surfaces across the cabin and, supporting the front occupants, all-new “low-rebound” seats designed to reduce fatigue over long distances and incorporating anti-whiplash head restraints.

Cabin noise is also said to be significantly reduced and the rear compartment in crew cab variants come with improved seats and easier ingress/egress, the latter helped by shifting the central pillar forward and adding an assist grip.

Preliminary specifications for the Thai-spec dual cab (in Hi-Ride 4×2 manual guise) show roughly similar dimensions to the current model – a fraction shorter, but a wider and taller stance – with overall length of 5265mm, width 1870mm and height 1790mm (including roof rails) – and, importantly, the wheelbase length has grown 30mm to 3125mm. Longer load trays are promised, but we are yet to see the detail on this.

Kerb weight has reduced, down to 1890kg on this premium Thai version, which reflects measures such as greater use of lightweight, but strong, high-tensile steel that contributes to an overall 20 per cent increase in body rigidity for the new generation model, according to Isuzu.

Isuzu’s engineers similarly appear to have left no stone unturned with the chassis, homing in on the suspension – redesigned double wishbones at the front and reworked leaf springs at the rear bringing promises of greater stability – and other areas such as braking (including 320mm front discs) and steering (for reduced effort and a tighter turning circle). We also note that the steering column now adjusts for reach as well as height.

Other points of interest include an increased maximum wading depth of 800mm (+200mm), claims of “greatly improved” corrosion resistance and, on 4×4 versions, a revised shift mechanism to reduce the time it takes to switch between two- and four-wheel drive and high and low range. The 4×4 also now has a single-piece aluminium tailshaft to further reduce weight, combining with an electromagnetic rear differential lock.

Service intervals and maintenance costs are also said to have reduced, although we’re also waiting on the detail here.

Staying safe around fire ants as a ...