Features
Home›Features›Staying safe around fire ants as a sparkie

Staying safe around fire ants as a sparkie 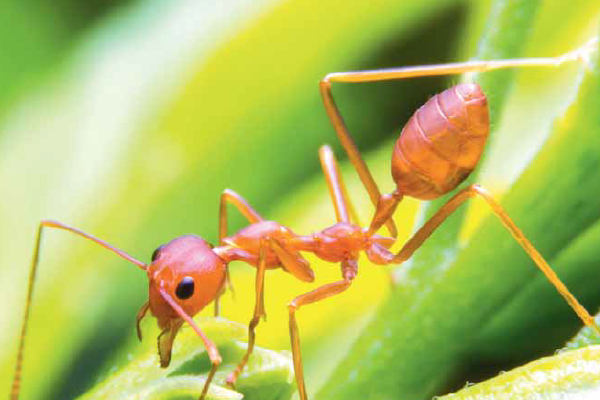 Solenopsis invicta can pose a threat to electricians, writes Paul Skelton. The very name of this invasive species means undefeated.

Fire ants have become a risk to electricians who access utility pits and junction boxes across the south-east corner of Queensland. Although the idea of ants may not sound overtly menacing, fire ants are potentially lethal to those who suffer anaphylaxis from their sting. They also destroy agricultural resources.

Everyone who comes across fire ants is legally obligated to report the matter and should avoid contact wherever possible.

Fire ants have been contained by a national program to south-east Queensland so far, and otherwise could have spread as far north as Mackay, west to  Cunnamulla and south to Sydney. They can be found in the corridor between Brisbane and the New South Wales border, including the Ipswich, Logan, Gold Coast and Lockyer Valley local government areas.

“It took a while to find the infestation, so the ants had a chance to spread. The area of operations for eradicating the ant is now around 500,000ha.

“The ants are difficult to eradicate, because thousands of queens are generated every year, making it a challenge to eliminate every nest to stop the spread.”

The biosecurity division of the Queensland Department of Agriculture and Fisheries has been running an eradication program since 2001, when the first outbreak of fire ants was discovered in Brisbane.

“The outbreak was well established when it was discovered. Modelling has shown that the ants were in Brisbane for probably 10 years before that,” he says.

“They have a 10-year head start on us, but the program has been very successful so far, as we’ve kept the infestation in south-east Queensland.”

In November 2014, an outbreak of fire ants was detected in Port Botany, Sydney. Genetic analysis showed that it was a new incursion from Argentina and not related to the Brisbane populations. Biosecurity officers immediately began baiting the Port Botany colony and searching for other nests.

This outbreak is now considered eradicated, but it shows how far and easily these ants can travel.

Andrew Cox says he recently visited the US, where fire ants run rampant.

“In some areas they’ve given up because they took too long to address the problem.

“In Texas, for example, some areas have 500 nests per hectare. It’s a really serious problem.”

Sting in the tail

So, why should people be concerned about an ant?

“These ants have a very powerful sting, and there have been at least 80 deaths in the US,” Ross says.

“About 1% of the population will have an adverse reaction to the sting of a fire ant. Of that 1%, several could be fatal.

“An individual sting is not all that painful. But these ants swarm in large numbers, so if you swat one it will release a pheromone that tells other ants to bite or sting simultaneously.

“About 24 hours after the stinging, you’ll probably see little pustules. If you scratch them, they will become infected. Multiple stings will make the area swell. In worst-case scenarios, some people will go into anaphylactic shock.”

Andrew says fire ants find their way inside pumps and electrical utility pits, and they are known to destroy that equipment.

“They undermine infrastructure; wipe out other insect life, reptiles and birds; and destroy crops and the root structures of trees. They’ve even been known to kill newborn calves and chickens.

“The economic loss can be 20% to 50% for some agricultural commodities. They could cost billions of dollars each year in damage if they were to spread to much larger areas.”

How do you identify fire ants, particularly when getting too close could be fatal for some?

The first indicator is the fire ant’s unique mound, which can be up to 50cm tall and conical in shape. The mound won’t have any entry or exit holes, unlike nests of native ants.

These nests are visible mainly in winter, when the ants build mounds to capture heat.

Ross says another giveaway is the range of ant sizes.

“They go from about 2mm up to about 6mm. With local ant species you don’t get that range. Fire ants are coppery brown in colour with a darker abdomen.”

It’s not uncommon to find nests in new suburban developments. The ants are seemingly attracted to disturbance, particularly in the soil as it is easier to form new colonies and there are fewer natural enemies.

Andrew says quickly brushing a nest with a stick – not your hand – will make fire ants rush to the top and try to attack. Native ants won’t do this.

“If you’re an electrician in a fire ant area, you have to be careful,” Ross says.

“Fire ants forage all over the place. If they come across an electrical switch or something like it, and they happen to make contact, the ants get zapped.

“Then they send out an alarm pheromone that attracts all nearby fire ants. These ants rush in and touch the one that’s been electrocuted and they get electrocuted too.

“Then more ants come in, and suddenly the whole thing shorts out.

“This can happen in air-conditioners, electric pumps on a farm, transformer boxes, telephones, circuit breakers and traffic lights. It can even affect lights at airports.

“You can imagine the chaos of airport lights going out. In the US, it costs airports about $142 million each year to treat fire ants and to replace lighting equipment that’s been shorted out.

“If the worst-case scenario were to occur and fire ants spread all over Australia, I estimate the damage bill to telecommunications and electrical supply and equipment would be half a billion dollars each year.”

Although the ants certainly enter utility pits, Ross doesn’t believe the creatures are ‘attracted’ to electricity.

“It’s just that they’re foraging. Junction boxes and pits are very convenient places to set up a home.

“Electricians who inspect utility pits or junction boxes, and are susceptible to allergies, need to carry an EpiPen.

“If you have any sensitivity to bee or wasp stings, you’re likely to react to ant stings.”

It seems unlikely that an infestation of ants as small as 2mm in length can be eradicated.

“We completed an independent review in 2016. It looked at the program and whether it was still feasible, and it concluded that it was still technically possible to eradicate the ant completely.

“The program was still financially beneficial and in the best interests of Australia.”

In July 2017, the national cost sharing-partners, comprising the Commonwealth and all States and Territories, decided to fund a $411.4 million eradication plan over 10 years to continue the campaign to rid Australia of fire ants.

Under this agreement the National Red Imported Fire Ant Eradication Program will receive $38 million a year, adjusted annually for inflation, until 2027.

Everyone who comes across fire ants is legally obligated to report the matter and should avoid contact wherever possible.

“With finite resources, you can’t target the entire infested area at once, so we’re doing it in stages,” Ross says.

The organisation will start in the west of the known infested area and work towards the east coast.

“So far, word from the eradication area in the west is that the treatment is looking positive.

“Farmers who had infestations on their properties now can’t see any ants.

“Moving on, it won’t be easy. No other country in the world has been able to eradicate fire ants. Australia has succeeded in eradicating several incursions, including one of the largest eradications of any ant anywhere – in the Port of Brisbane.”

According to Andrew, the primary focus for electricians should be on not getting stung.

“Electrical contractors should not try to destroy fire ant nests on their own. They should seek help from someone who knows what they’re doing.”

RMS and TRMS in current and voltage ...