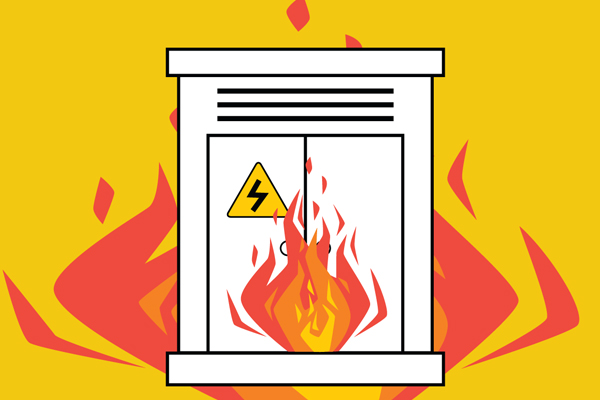 An innovative solution has been introduced to guard against fire due to arcing. Lindsay Lucas reports.

The 2018 edition of the Wiring Rules covers a new type of circuit protection known as the arc fault detection device.

An AFDD automatically disconnects supply in the event of low-level arcing faults in final sub-circuit wiring. The intent is clear – to mitigate the risk of fires being ignited by electrical arcing.

Requirements for the use of AFDDs differ between Australia and New Zealand, so please refer to Clauses 2.9.6 and 2.9.7 respectively in the Standard AS/NZS3000.

Clause 2.9 refers users to the new Appendix O for information on the installation of AFDDs.

AFDD technology has been developed over the past 20 years, first finding application in the United States, where the National Electrical Code (equivalent to AS/NZS3000) is heavily influenced by fire protection agencies and insurers.

Eaton patented AFDDs in 1996 for the North American market and has since developed an IEC product for use elsewhere.

AFDDs have specific application in protecting final sub-circuit wiring in electrical installations. They should not be confused with arc flash detectors and similar devices used in low-voltage and high-voltage electrical switchgear for protection against fire and explosion in the event of internal arcing faults in the switchgear.

Historically, miniature over-current circuit breakers and fuses have been used for protection against fires initiated by overheating of conductors due to overloads or short-circuits.

However, the heating effect of low-level arcing faults in a conductor (series arcs) or between live conductors or live conductors and protective conductors (parallel arcs) cannot be detected by these devices because it occurs at or below their rated current.

The degradation of insulation caused by carbonisation due to these low-level arcs ultimately leads to total failure of the insulation with catastrophic results.

Similarly, residual current devices are unable to detect these faults when they do not cause an imbalance in the current-sensing device.

AFDDs employ advanced sensing techniques and algorithms to sample and analyse the waveform of the current. They discriminate between normal load current and abnormal conditions associated with arcing faults of either type.

When selecting and installing an AFDD, consideration must be given to:

The short-circuit making and breaking capacity of the AFDD must be at least capable of dealing with the prospective short-circuit current at the point of installation (paragraph O4.3bii).

Protection of the sensitive electronics in an AFDD from damage due to over-voltage should also be considered as part of the installation design (paragraph O4.4).

AFDDs should be considered for areas of highest risk, for example, socket outlets (paragraph O4.3c) or other loads where there is a risk of damage to conductors leading to arcing faults.

Installations susceptible to loss from fire may benefit from AFDDs, for example, premises with sleeping accommodation; places constructed of, or for the storage of, flammable materials; and premises where valuable items are stored, such as galleries or museums.

It may also be of benefit to consider AFDDs for installations with ageing or deteriorating wiring. Circuits with deteriorating insulation passing through an area may also require consideration, in addition to those that terminate in an area.

They switch active and neutral conductors, making them suitable for use in New Zealand, where residual current devices require two-pole switching.

Lindsay Lucas is engineering manager for Eaton’s ANZ Power Distribution business and has a long tenure with Eaton, Cutler-Hammer and Email-Westinghouse. He is a member of Standards Australia committees EL-001 Wiring Rules, EL-004 Electrical Accessories, and EL-006 Industrial Switchgear and Controlgear. He also chairs sub-committee EL-004-9.

Lindsay holds a BE (Electrical) and a Master’s degree in Engineering Management from the University of Technology, Sydney.