Vegetables head towards the light 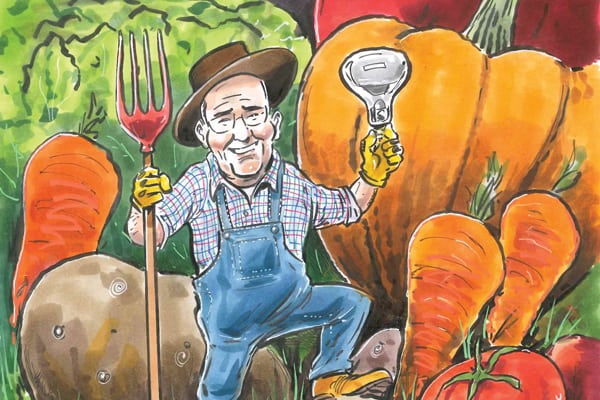 Growing vegetables out of season, isolated from the weather and with no need for arable land may not be a utopian dream any more. Phil Kreveld investigates.

Siemens was a Prussian engineer and inventor who had moved to the United Kingdom in 1844 and was later knighted by Queen Victoria for his services to science.

His paper On the Influence of electric light upon vegetation, and on certain physical principles involved (Proceedings of the Royal Society of London, January 1879) is of seminal importance. Shown below are quotations from it. Bear with the formal English, as it underscores the imaginativeness of the scientific proposition to take control of nature.

Two scientists in the United States – Borthwick and Parker at the Plant Industry Station (Beltsville, MD) – published results in 1949 on the use of carbon-arc lamps for growing Biloxi soybeans.

As they describe in their paper Growth and composition of Biloxi soybean grown in a controlled environment with radiation from different carbon-arc sources (Plant Physiology, 1949), the lamps burned ‘sunshine carbons’.

The carbon electrodes were cored with certain materials that become incandescent (cerium fluoride, for example) thereby increasing the energy in the visible spectrum, in particular towards the blue-violet part.

They found that by combining the arc lamps with incandescent lighting, a sturdier plant developed because the radiation then also provided near infra-red energy. The ‘sunshine carbons’ peaked at 280mμ (millimicrons or 10-9 metres), and chlorophyll has maximum absorption at that wavelength.

Fluorescent lamps are still being used, such as the slimline T5. However developments in LED technology is bringing great advantages to greenhouse horticulture.

Despite the advances, replacing the sun (which Siemens described as that ‘great luminary’) is no simple thing. The accompanying table shows a spectral break-up of the colours in sunlight.

The perfect lamp would be able to completely mimic the spectral distribution of sunlight. In practice no single lamp will suffice, and that also applies to LEDs.

The physics of Albert Einstein and Max Planck in the equation E=??/?  underpins atomic interaction with light – as particles.

Light quanta (packets of light, each with a specific E energy according to its wavelength λ and travelling at the speed of light c) are absorbed, and that energy is used (photosynthesis) for taking up carbon dioxide from the atmosphere. This, together with water in the plant, splits the water into oxygen and hydrogen, with the latter forming carbohydrates in the plant.

The interesting thing about these quanta is that each one that is absorbed is responsible for knocking off an electron (part of the chemical process). So rather than thinking in lux (light as a continuous electromagnetic wave motion) we conceive it as particles of energy.

Rather than describing the light output in lumens or lux, a rather unfamiliar term is used for horticultural purposes: the mol and micromol. But there is no need to study chemistry. These units indicate that it is light quanta as described that do the ‘business’. The shorter the wavelength, the higher the energy of a light quantum. A violet colour quantum packs more punch than a green one, and so on, as energy diminishes the more the wavelength moves towards red and then to infra-red.

So what is a mol?  In chemistry it is the weight in grams of 6 x 1023 atoms of whatever element you care to choose. Because a light quantum can ‘do something’ to an atom in order to make a reaction take place, it is a good idea to skip lumens and lux, and to use the same ‘quantity number’ for light quanta.

Thus 1 mol of light quanta (in some narrowly defined wavelength range) is equal to 6 x 1023 quanta, each one of which basically can help a single photosynthesis reaction to happen. The micromol is one millionth of 6 x 1023 (6 x 1017) or still a very, very large number. From a greenhouse aspect. people are interested in the number of quanta per sec per square metre.

What finally happens in a plant leaf depends on the spectral absorbance, and that is determined by plant pigments such as chlorophyll, the characteristic green colour.

However, there are also the yellow, orange and red colours of other pigments such as carotenes, xanthophylls, etc.

In Figure 1 the typical response curves for LEDs are shown as a contrast to high pressure sodium (HPS) vapour lamps. Note: a nanometre is also a mμ (milli-micron)

The yellow curve indicates the HPS spectral response, and the LED curves are shown in admixtures of red/blue light for 100% red (red trace), 85% red-15% blue (mauve trace), and 70% red-30% blue (blue trace). The total quantum flux emitted is identical for all curves at 70 micro mols/sec/m2. The strong advantage for the use of LEDs in horticultural applications is the flexibility available in spectrum distribution to suit particular plant varieties.

LEDs began to be used for horticulture several decades ago.

One of the first practical applications was the growing of lettuce using red LEDs augmented by blue fluorescent tubes. Using red light alone had the effect of elongating seedlings. In general, longer wavelengths tend to elongate plant stems and thicken them.

A distinction must be made between greenhouse environments and entirely artificial lighting.

Photo-periodic lighting (to induce flowering out of season) supplemented by natural daylight involves different demands, and a great deal of scientific literature deals with ‘light recipes’.

It has resulted in the development of highly specialised LEDs such as the ORBITEC ‘light engine’ – red, blue, green LED cells and photo-diodes for feedback and control purposes. This includes detection of spaces between plants and switching off needless illumination.

Much higher efficiency compared with other forms of lighting (for LEDs it’s about 80%) means less heat dissipation. Some radiated heat is often required for sturdy plant growth but it must be carefully controlled. The relative coolness of LEDs allows them to be employed as intra-canopy light sources. This can be a substantial advantage when tall plants are grown.

Practical issues include dissipation of heat that is not always unwanted but generally requires venting to control temperature.

There are several suppliers, and it’s no surprise that development of LED technology is encouraged in colder climes.

Philips is a leading supplier and promotes products with high efficacy. Efficacy is specified as μmol/J (joule). The joule is of course the watt-second, which brings the specification back to μmol/sec/watt.

The practical embodiment of an LED illumination system requires several features, including a thermal design to extract heat and an optical design that maximises light availability.

Integrating driver circuitry also simplifies installation, and modules should be capable of being plugged into the mains.

In the case of Philips products, the shape of the modules has been chosen to match standard 40x40mm C-profiles. With the accompanying brackets, installing a module is a matter of seconds. Installation time is further reduced by routing mains wires through the module, allowing for cable-free installation.

This has led to the development of efficient, reconfigurable LED lighting systems that will support crop growth in a crewed space habitat. The LED arrays were based on light sources using printed circuit red and blue LEDs, individually tuneable for a range of photo-synthetic photon fluxes and plant responses.

In 1962, when Nick Holonyak at GE invented the first LED (emitting infra-red radiation), who could have imagined that one day the technology would play such an important part in food production?

I really want to know!