Success in fixing appliances and other electronics will enhance your reputation as a skilled technician, and in the long term offer significant billable hours. David Herres explains. 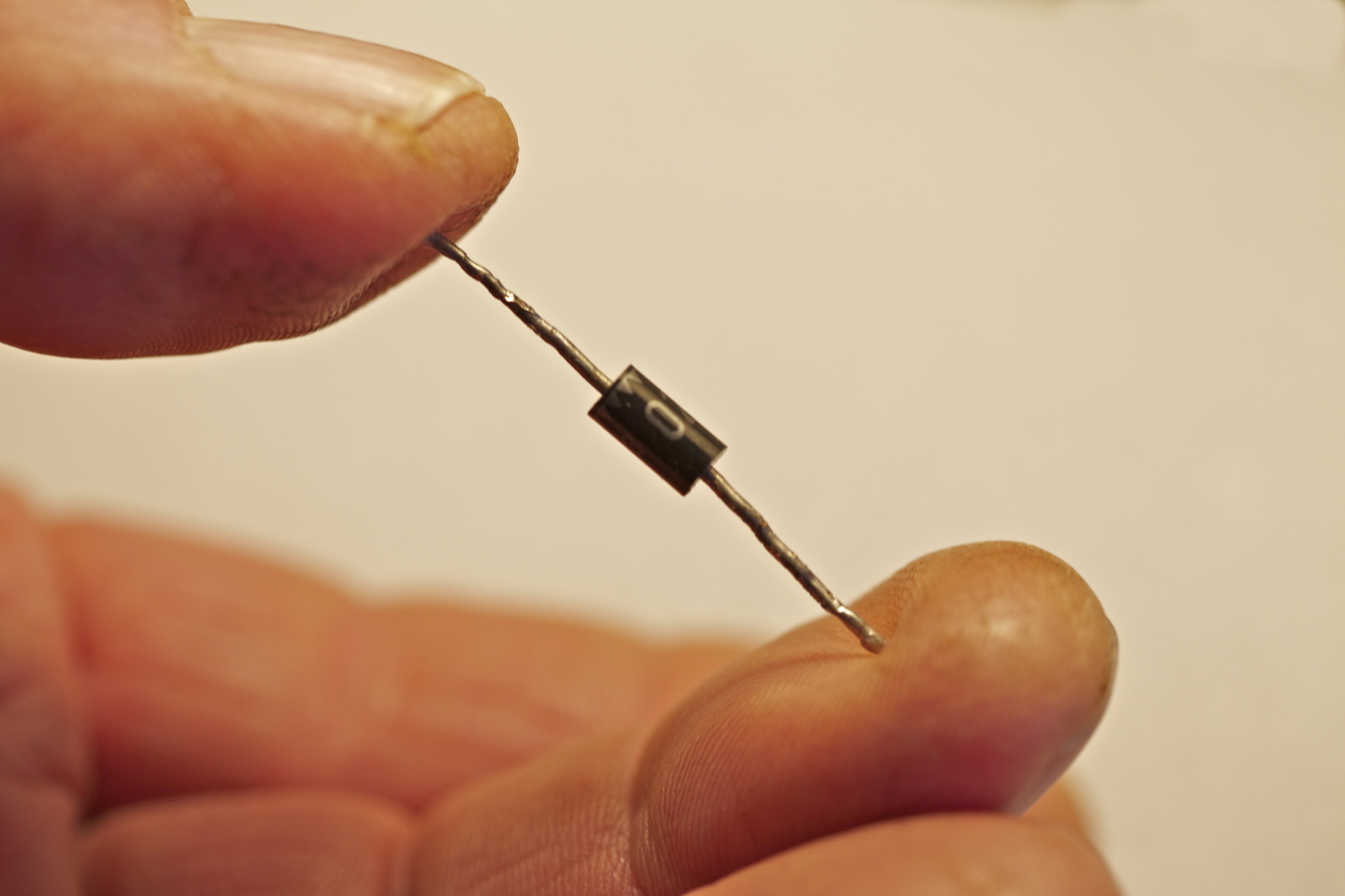 In addition to working on premises wiring, electricians are often asked to look at ailing appliances, tools and all sorts of electronic equipment. And this equipment contains lots of diodes.

Diodes perform many functions and, because they are sensitive to transient power surges, ambient heat, latent manufacturing defects and ageing, they are frequent offenders when it comes to equipment malfunction. The good news is that they are easy to test with your multimeter, inexpensive to buy and, with only two leads, easy to replace.

First we’ll take a look at the internal structure and operation. Of course they are sealed units and the action takes place on a subatomic level, so it is impossible to repair these semiconducting devices. Nevertheless it is useful to know about the inner workings because such knowledge provides perspective on their in-circuit behaviour.

The diode is formed by joining a wafer of N-type silicon and a wafer of P-type silicon. At the far ends, away from the junction, wire leads are affixed to facilitate electrical connections.

The charge carriers on both sides migrate either toward or away from the junction depending upon how the diode is biased. This is done by hooking the diode to a power source, such as a battery. If the negative pole of the battery is hooked to the cathode (lead connected to the N-type silicon), the electrons will be repelled and move toward the junction, and simultaneously since the positive pole is connected to the anode (lead connected to the P-type silicon) the holes will be also repelled and move toward the junction. In this configuration, the diode is said to be forward biased, and it will conduct.

Conversely, if the battery connections are reversed, the charge carriers will be attracted to the two poles of the battery, the electrons to the positive pole and the holes to the negative pole. They will move away from the junction and the diode will not conduct. The whole thing is very simple if you can accept the fact that holes, the absence of electrons, act like real particles with a charge that is the opposite of the electrons, and they can convey electrical current.

A diode is like a check valve in a water pipe. It permits electricity to flow in one direction, when it is forward biased, but not in the other direction when it is reverse biased.

It is to be emphasised that if you want to build a circuit with diode, battery and ammeter all in series to demonstrate the behaviour of the device, you have to be sure to include a resistor also in series to limit the flow of current so as to avoid instantly frying the diode. Alternately, you could insert some other load into the circuit, such as an LED. (The ammeter has practically zero impedance and will not limit the current.)

Diodes may be easily tested using a multimeter that has the diode check function. When you connect the meter on this setting to a diode, the diode is biased and voltage drop is measured, providing a go/no-go diagnosis. If your meter does not have the diode check function, you can still check a diode using a medium-range ohm setting. When the probes are connected to the diode to be tested, the meter’s internal battery will either forward bias or reverse bias the device, depending on which way the probes are connected. A good diode will exhibit high resistance in one direction and low resistance in the other direction. This is not totally definitive because the diode may behave differently in circuit, but most of the time the test will tell you what you need to know. A bad diode will read the same in both directions, either shorted out or open.

A diode that is bad will sometimes have a burnt appearance, but not always. The test described above can be performed on a diode that is in circuit as long as there is not a parallel load that could make for a false reading. If you think this is a possibility, disconnect one lead. If the diode turns out to be good, be sure to use a heat sink when resoldering so that the diode is not damaged by heat.

Diodes can usually be identified by the cylindrical shape, with two leads. They often have an arrow identifying polarity, or a single band or a + symbol.

Diodes that are used in high-power circuits will be larger and have prominent heat sinks, often aluminium with characteristic cooling fins to radiate excess heat.

Because they conduct in one direction but not in the other direction, diodes have a great many practical uses in all kinds of electrical equipment. For example, if a diode of sufficient current handling capacity is placed in series with an AC power source, the output will be pulsating DC. This is known as a half-wave rectifier and the resulting current would suffice for charging a battery but noisy and difficult to filter for audio, video and data applications. A better arrangement is a full-wave rectifier, characterised by two diodes plus a transformer centre-tap connection, or better yet a full-wave bridge rectifier with four diodes connected in ring configuration with AC input at two opposite corners and DC load at the other two corners.

These rectifiers are common power supply subsystems used in all kinds of electrical equipment where DC voltages are needed. The diodes are easy to identify because they are connected by means of fairly heavy wires attached to the main power transformer, usually located adjacent to where the ac supply comes into the cabinet. Where a piece of electronic equipment appears dead and unresponsive, check the voltage at the power transformer output and take it from there, as described above.

Since this is where there is greatest power flow, better than half of all equipment malfunction results from one or more bad diodes and you can often get the equipment back in service by checking out this area.

Please remember that large power-supply capacitors, used for filtering out the DC ripple, are capable of storing lethal voltages long after the equipment has been disconnected from the power source. Bleed out these capacitors, not by shorting them out but by connecting a sensible load such as a low-ohm resistor.

Installing KNX into a broadcast van

An introduction to commercial refrigeration