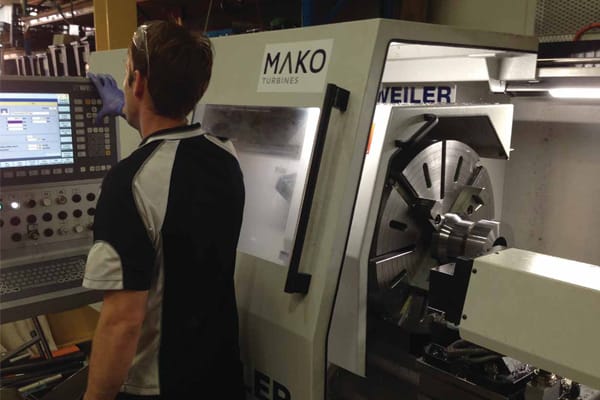 Tidal energy, or hydrokinetic energy as it’s more formally known as, is emerging as one of the most efficient forms of renewable energy.

Mako Tidal Turbines, which specialises in this area, is making a name for itself thanks to brand new turbines that operate in free streams of water – such as tides, rivers or canals – that flow at speeds above one and a half metres per second.

Due to water being approximately 800 times denser than air, water flowing at two and a half metres per second yields the same amount of energy as 260km/h winds.  Further, tidal energy is 100% predictable in tidal flows and in constantly flowing water in a river or canal, base load electricity can be harvested.

“Tidal energy is becoming more cost effective and that’s why we want to be seen as a part of the energy mix with our range of turbines. Not to try to out-compete solar or wind, but to become accepted as a part of an energy solution for remote communities,” Mako managing director Douglas Hunt says.

“The technology solution that Mako has come up with for remote off-grid communities is a small, light modular tidal turbine with an output capacity of 15kW.  With an all-up weight, only 130kg, installation is quite straightforward and most maintenance can be managed onsite by users or members of the communities.”

Mako has made extensive use of advanced design software using cloud computing, high precision CNC machinery, a robot and 3D printing in its own factory.  Together with an engineering philosophy to fabricate smaller, simpler individual devices, has resulted in rapid development of models and the innovation loop from design to fabrication and testing has been very swift.

“The Mako turbine has been designed using engineering first principles to operate efficiently in a marine environment.  This includes the use of materials that have been proven in boatbuilding and marine construction through to the unique design of our bulb and our blades,” Douglas says.

“To promote reliability and low-cost operation, the Mako incorporates a range of direct drive generators which eliminates the need for a gearbox and results in the Mako turbines having only a single moving part.”

Mako has specified Bosch and Siemens generators initially, but is looking to partner with other suppliers in the 5kW to 20kW range to suit local conditions.  Also, Mako is using off-the-shelf power electronics components from the wind industry to ensure power quality for customers.

Another recent development being incorporated into Mako turbines is the ability to centrally monitor and control turbines, even in remote locations using Internet of Things (IoT) technology and satellite communications.

“The cost of components and connectivity has come down so fast that even small turbines can now communicate data in real time which allows us to predict faults in advance, update power electronic controls to promote efficiency, gather data on environmental conditions and turbine performance – even generate power purchase agreement invoices,” Douglas says.

Moving forward, Mako is commercialising its technology, with a focus on the initial MAKO.4 model targeted at remote communities near flowing water where diesel generators still provide a significant proportion of electrical power.  In these locations, the Mako can integrate with other forms of energy and storage solutions with the aim to reduce the amount of diesel consumed at these customer locations.

“Recent technological developments, whether improved computer software, advanced materials or IoT, help us solve the many challenges in operating in a harsh marine environment,” says Douglas.

“Our next phase is to connect with industry partners who can add their expertise and experience to improve our customer offering and to find investors who share our vision for the industry and will take our technology into the Asia Pacific region.”

A place in the sun

A power of good