Trigger happy in the bedroom 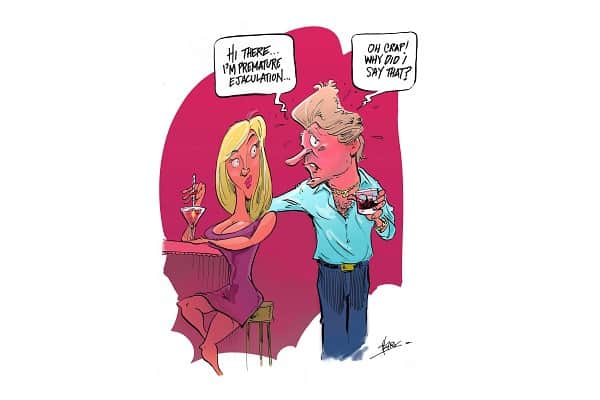 I once asked a group of doctors what they thought was the most common sexual health issue affecting males. The consensus among them was impotence or erectile disorder, which was a reasonable answer as it is a condition that men (or their partners) actually complain about and seek help for.

Interestingly, the most common condition by far is actually premature ejaculation, with about two thirds of all males experiencing it at some stage, and as much as one third on a consistent basis. It is more common in younger males with an estimated incidence of 40% in males under 40 years of age. It certainly represents one of those silent epidemics as very few complain of it and I’ve never had a partner come in to dob the male in, whereas it is not uncommon for this to happen if low libido or impotence occurs. I imagine most males have experienced premature ejaculation at some stage in their sexual life. Thankfully, there is a new drug out on the market which specifically targets this condition and is now freely available from your GP.
HOW IS PREMATURE EJACULATION DEFINED?
There are many definitions based on various parameters and not one definition defines all. There must obviously be some subjectivity in the diagnosis as the partner must come into the equation but the current medical definition is stated as uncontrolled ejaculation on or shortly after penetration, before the person wishes, which also causes distress and interpersonal difficulty. Distress is the key word in this definition as the male senses a complete lack of control over ejaculation. The distress may also be felt by the partner as sexual fulfilment may be recurrently lacking.
Other definitions have utilised the time factor, with a standard of less than one minute of intravaginal time before ejaculation as being considered premature. Masters and Johnston bring the partner into the equation with premature ejaculation being defined as ejaculations occurring prior to the partner on greater than 50% of occasions. Some have even utilised the number of thrusts of the penis, stating that ejaculation is considered premature with male orgasm occurring with less than 15 thrusts. Basically, if there is a concern that you are coming too early and some distress is resulting from that, then seek some form of assistance.
Part of the problem lies in the fact that males, unlike females, generally have a prolonged refractory period after ejaculation which means that an erection and more so a further ejaculation is not possible for some time after the initial ejaculation. This time can be a matter of hours in most men who rapidly lose that spark to carry on the sexual activity; leaving a frustrated partner and consequential relationship issues.

WHAT IS THE CAUSE?
It was initially thought that a lot of the problem was psychologically based, perhaps along the lines of a performance anxiety problem. I think that this is certainly still part of the problem. Recently, however, it has been noted that over 90% of chronic sufferers have a first degree relative with the same problem which raises the possibility of a genetic predisposition. But as I keep saying, you can’t change your genes. It would also be difficult to obtain a proper family history regarding this condition. Can you imagine asking grandpa or even worse, grandma about it. Imagine bringing that one up next Christmas. It could lead to premature death!
There are some other secondary psychosocial causes which may need to be looked for and they include stress (particularly from a concurrent illness), poor sexual education, religious or cultural inhibitions, infrequent sexual activity and novelty of the partner. It can often go hand in hand with erectile disorder with the male initially struggling to get it up and then shooting off straight away when it finally is erect. Very frustrating! There are a couple of medical conditions such as low grade infections in the urethra (urine tube in the penis) and the prostate, as well as an over active thyroid which may contribute to premature ejaculation. A urine test and a blood test can quickly sort out these conditions.

WHAT CAN BE DONE ABOUT IT THEN?
Firstly it needs to be discussed with your partner. Putting the issue on the table can be very therapeutic on its own. Importantly, it is treatable in about 70% of cases so be optimistic rather than pessimistic and go and see your GP about it, particularly if simple measures don’t settle it. What else is available to assist?

Behavioural and Physical Techniques have been tried:
– Stop-start techniques: This involves getting close to ejaculation and then rapidly retreating and taking a break before resuming again. This is repeated over and over. Males all know that point of no return when the roller coaster hits the top before going down with a gush on the other side. It can’t be stopped. It’s a matter of learning to pull back just before reaching the climax. This can be difficult and requires a very understanding partner. It’s a bit like a desensitisation program.
– The squeeze technique: This is generally unhelpful. It involves getting close to ejaculation, withdrawing and then squeezing the living daylights out of the knob of the penis which causes discomfort. The uncomfortable sensation will suppress ejaculation but the blood gets squeezed out too and the erection is lost. Some find that this technique works best when a Viagra-like drug is used in order to maintain the erection.
– The use of condoms: Some studies have shown that men who are prone to premature ejaculation have an increased sensitivity to touch in the genital area. This may be reduced by the use of condoms.

Medication:
Topical treatment: Local anaesthetic or numbing agents have been used to try to reduce penile sensitivity with a bit of success in some instances. The two I know of that have been used are EMLA® cream and Xylocaine® Spray. We doctors use these to numb the skin before injections, particularly in children. The creams may also be passed onto the partner so they are probably best used with a condom.
A new oral drug called Priligy® has recently come on to the market and is a very useful treatment option in a market that was devoid of a specific drug. Prior to this drug arriving we had to rely on the side-effects of a few different drugs used for other conditions such as depression to assist our patients with premature ejaculation.

HOW DOES IT WORK?
The nerve cascade that causes orgasm and ejaculation comes from sensory nerves on the tip of the penis. It sends sensations back to the brain which then sends nerve impulses back down to cause ejaculation via muscle contractions in the prostate gland, the seminal vesicle, the vas deferens and the epididymis. Importantly, there is also a nerve pathway coming down from the brain which acts to block or inhibit the one that causes ejaculation and this is the one that needs to be targeted by drugs.
The body is full of these checks and crosses. These nerve pathways require chemicals called neurotransmitters to pass the nerve impulses down the nerves. The neurotransmitter involved in inhibiting or delaying ejaculation is the chemical Serotonin. You may have heard of this chemical being involved in the treatment of depression as a lot of the anti-depressant medication act by increasing the levels of Serotonin which helps to relieve depression. One of the side effects noted by men on anti-depressants is delayed ejaculation, sometimes with no orgasm or anorgasmia. This then has been used in reverse to help those with premature ejaculation. Prior to Priligy® coming on the market I would use one of the anti-depressants for my patients but side-effects could be a problem. One of the very old antidepressant drugs called Clomipramine (Anafranil®) at a dose of 25mg actually worked the best but there were a lot of side-effects – dry mouth, constipation, nausea, and dizziness… you being to wonder whether it is worth it!

The chemical name for Priligy is Dapoxetine. It is available in a 30mg strength tablet. It is not Government subsidised and is on a private prescription. It is not inexpensive but with time the cost will come down and it is wise to shop around. The value of it over the anti-depressants is that it is short acting. For various reasons it has been limited in use to the 18 to 64 year old age bracket and it should not be used more than once in a 24 hour period. It is recommended that it be taken 1-3 hours before sexual activity to get the maximal therapeutic effect.

The most common side effect is nausea with others complaining of dizziness, headaches or diarrhoea. Dizziness may lead to fainting thus the best place to be in this situation is lying down. So beware of bedroom gymnastics! Some heart beat irregularities have been noted on occasions so you need to speak to your GP if you suffer from any heart ailment as it may not be safe to try it. It is probably best to not take with alcohol and certainly not if you are on other anti-depressants. It also interacts with some other medication and hence the reason that it should only be given by a GP on a prescription.

There is some good evidence that the Viagra® type drugs used for Erectile Disorder may also have some benefit in the area of premature ejaculation as the nitric oxide produced may relax smooth muscle in the ejaculating muscles as well as the blood vessels and hence relax ejaculation. You certainly wouldn’t combine the drugs as they have similar side-effects and it would be quite dangerous.

In a perfect world, couples would make love for hours and hours, culminating in a tumultuous unified orgasm. Alas, that is probably not possible because as sexual beings, males and females are poles apart and no perfect world exists. But the considerable anxiety that may ensue from recurrent premature ejaculation may be allayed by simply addressing the issue and putting it out on the table. Plenty experience it but aren’t particularly harmed by it. For a lot, it will be transient and just as it comes (excuse the pun) it will go. In some however, it does have the potential to perhaps undermine a relationship with frustration. We have far too many pills to treat all our ailments and we as doctors overly reach out for a prescription pad when perhaps a good chin wag is all that is required. Premature ejaculation is one of those conditions in which an adequate drug solution did not previously exist and we used the off-label effects of antidepressant drugs to assist our patients. At least now there is a designated drug which may assist if needed. That is reassuring for me as a doctor, and particularly for one interested in men’s health issues.

Sexual health is a fascinating area of men’s health because blokes are pretty backward in coming forward about it. Sometimes just knowing that it is a common condition and that there may be assistance, if need be, can be reassuring enough to allay anxiety and be the seed for a solution. I hope this article has assisted some to understand themselves a bit more. Until my next article, remember to stay happy and healthy.

IPD is designed to last