The Buzz
Home›Contributors›The Buzz›The wiring riles is on the amend, again

The wiring riles is on the amend, again 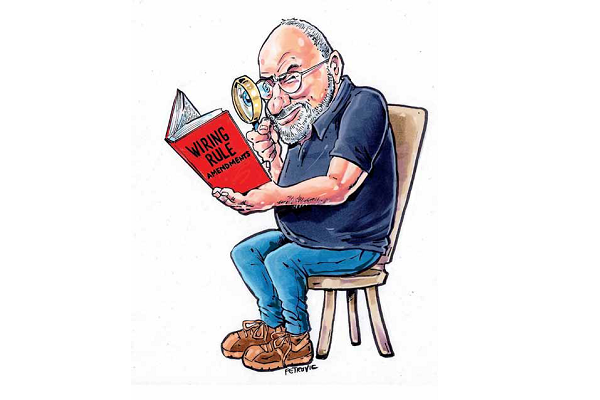 Gary Busbridge provides his take on the latest amendments to the Wiring Rules.

Even with the latest revision of the Wiring Rules in 2018, there is still plenty of discussion on technological updates and how they should be applied. AS/NZS 3000:2018 had an Amendment 1 published in March 2020 which was mainly concerned with a tidy-up of editorial issues. But when working through these, there were a few technological issues that were being raised and these were affecting the electrical industry in the here and now. So, it was decided that an urgent amendment was needed to address the concerns.

By effecting an amendment now, the Wiring Rules will be updated to address urgent issues affecting the electrical industry and enable relevant installation work to be undertaken. The following provides the main changes for the amendment.

‘Common-use areas’ have been a bit of a concern, considering the implementation of the latest RCD rules as to residential and non-residential and the demarcation expected.

Speaking of RCD’s there are a few changes to these requirements. Firstly, there was an exception that allowed the electrician to forgo testing of an RCD if there was no power to the installation. If you think about it, this is crazy.

One of the best safety devices introduced in the last 20 years to greatly improve personal safety of the end-user and electrician alike in any installation… and we don’t have to test! This exception will be removed.

So, it is now important to test that RCD to ensure it works as intended (which I reckon most in the electrical trade are doing anyway). It’s as simple as supplying power at the time of testing and only for that testing, by use of a genset, inverter or some-such device for the period of time needed for that RCD test. Walk away from your job knowing that the installation works as intended.

Secondly, regarding alterations, we have removed the ability to add RCD protection at the start of the additional part of the circuit (this was usually done by adding a socket-outlet RCD at the beginning of the new part of the circuit). Incorporating this change will mean that the altered circuit will need to be protected by RCD at the origin of that circuit, the switchboard. Makes sense,
as it is a way to ensure that the whole circuit is duly protected.

Thirdly, in respect of repairs, there is increased clarity regarding the replacement of existing lighting. To explain, if replacing existing halogen downlights, that may have been directly connected to the existing lighting circuit, with LED downlights that have a 3-pin plug for connection to the lighting circuit, the sparkie may add a plug base (surface socket) into the existing lighting circuit.
The way it was worded would mean that this would require an RCD at the switchboard (as a socket has been added), but there is now an exception to allow the repair or replacement of the light fitting and addition of plug base without needing to provide RCD protection. Maybe it would be a good idea to suggest this to the home-owner at the time, a safer installation all round, but not necessary.

Lastly, unless you have been hiding under a rock you would have noticed that there is a lot of DC current within our installations nowadays. Whether it be the PV on the roof, the battery in the garage or the latest fridge with internet access, DC is everywhere.

This has exposed the fact that the general type of RCD used within Australia is a Type AC RCD which is great for AC current detection but has no real effect in the case of a fault which incorporates DC current. To this end, we are changing the requirements for a general RCD to be Type A, which has both AC and DC detection capabilities.

You can tell the difference by looking at the RCD and there will be a square symbol showing the AC sine-waveform and the DC square-waveform. Very easy to spot, but because this will necessitate supplier and manufacturer change there will be a 24-month transition from publication, to the need to comply.

The Wiring Rules is an installation standard and as such after that transition period you will have to install Type A RCDs. Anecdotally, I must say that there are probably many suppliers already providing Type A RCD’s to the market, I guess many of you are installing these without even knowing.

The next topic covers the illegal use of double adaptors, power-boards and plug adaptors within the ceiling space for lighting connection. These devices are not to be used within a ceiling space
and the Wiring Rules already makes that statement, but we have added clarity for this to ensure that this practice is outlawed, as it should be.

Just because there is a plug base installed doesn’t mean that you can plug in an adaptor for multiple light fittings. A serious no-no!

Over the years there has been concern from regulators and industry in regard to the compliance of switchboards. There is a hefty clause within AS/NZS 3000 that provides detail as to the make-up of a switchboard which has been sufficient until recent times.

There has been a new switchboard standard published in 2016 which is the AS/NZS 61439 series. There was previously an AS/NZS 3439 series and there has been a five-year transition period when both standards have been suitable, but that comes to an end in May 2021.

AS/NZS 61439 series has many benefits in its application and as such the industry has stated that it is vitally important to have switchboards above 125A and 10kA prospective short-circuit current made compliant to AS/NZS 61439 series. This has been included in the amendment and will ensure that both the industry and regulators will have a robust set of standards to reference against
switchboards.

Residential type switchboards, the plastic enclosures that are now installed, have various makes and types of circuit protection installed, as we are all aware and that is why the requirements of switchboards 125A and under can be supplied as per the clause within the Wiring Rules or to the requirements of AS/NZS 61439-4 Distribution Boards for Ordinary Persons. Verification of circuit
protection (of various makes) and a simple enclosure is very difficult from a residential perspective.

Further to this we have amended the size of doors required for entry or exit from a switchboard room as this was initially referencing a 2200mm door height, which is a great departure from the requirements of the National Construction Code (NCC).

So, there you have it, an overview of the major changes for the next amendment to AS/NZS 3000 Wiring Rules that should provide your business with a heads-up to keep you in front of the game.