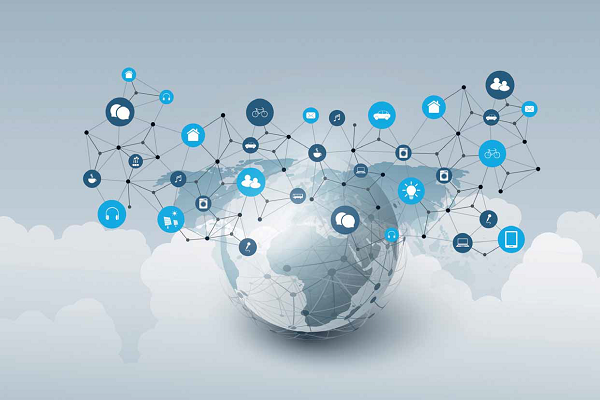 Phil Kreveld explores the Internet of Things and world of possibilities awaiting the electrical industry.

“When wireless is perfectly applied to whole world, it will be turned into one gigantic brain,” said Nicola Tesla, inventor of the induction motor, in 1926.

Nicola was a visionary and somewhat ahead of his time.

The world had to wait until 1995 when the European Centre for Nuclear Research (CERN) launched the embryonic World Wide Web during that year’s G7 meeting of the great political powers. It
was then that the basis for the Internet of Things (IoT) was established.

The term IoT was coined in 1999 by Kevin Ashton, the then director of MIT’s Auto-ID centre (one of its projects at that time was the use of radio frequencies to identify objects).

The World Wide Web presaged the virtual explosion in the digital information world via widespread diffusion of low power, wide area networks (LPWAN), based on frequencies such as LoRa™ which uses licence-free radio frequencies (in Australia, 915 MHz). The LoRa Alliance is a not-for-profit organisation, promoting open standards for the use of IoT.

IoT is now all-pervasive and has opened up an astronomic number of ‘things’ capable of providing information and to being controlled through the use of IPv4/6 addressing protocols for
devices, expected to eclipse 30-billion worldwide in the next few years. Applications in the IoT universe are virtually boundless, and in many ways, allowing a quantum jump over control philosophies such as hierarchical control, not only simplifying but also short-circuiting erstwhile complicated and laborious control schemes that made changes difficult and expensive.
To anchor our story, let’s look at some typical applications. Picture a sewage or water treatment plant.

There are a number of widely dispersed sub-distribution boards, local PLCs, pump motors and a raft of monitors for pH, bioactive dissolved oxygen, water conductivity, etc. Similarly, an extractive industry beneficiation plant, with many motors for the flotation tanks, monitors for chemicals added for efficient extraction of minerals and for measuring mineral concentration in slurries, provides a good example.

These types of plants might easily occupy the order of several thousands of acres, offering a major headache for putting in place control wiring. IoT provides the fix, replacing wiring with radio.
I spoke with Urban io, a Melbourne-based company, focussing on cloud-based IoT applications in Australia and abroad.

Rob Cummings from Urban io explains the business philosophy as altering anything in extensive and complex control schemes, be it for building management, factories, hospitals and so forth, is joyless and expensive.

Often legacy control has a more or less encyclopaedic coverage, the original design having contemplated thousands of nodes to be monitored. Engineering philosophies that furnished the original concept are often as not at variance with requirements of preventive maintenance or good housekeeping. For example, facilities management often reduces the number of nodes to be monitored from thousands to maybe a hundred or less, essential in preventing unexpected interruptions to processes.

Pictured above is a PLC in a water treatment plant, requiring monitoring— often an exemplar of ‘forgotten’ plant, but actually very important to the plant processes. There are four Urban io
sensors, each with its own stub antenna, mounted in the enclosure housing the PLC, and monitoring critical PLC outputs by way of their relay closures and opens that are wired to the sensors.
Broadcasting the relay contact conditions via LoRa to a router, and from there to the ‘cloud’, allows plant maintenance electricians to receive alarm messages on their phones in cases of malfunctions.

The PLC might be one of those forgotten ‘orphans’, discovered as important but equally relevant are complicated control schemes that do not lend themselves to being tailored for housekeeping/preventive maintenance. With IoT and appropriate sensors, a monitoring/alarm scheme can be overlaid without recourse to inbuilt control wiring and programming.

Urban io uses a standard template dashboard, that responds automatically to its range of sensors including 4-20 mA transducers and transducers for temperature and vibration monitoring.
Jobs such as monitoring pump motors are made easy using housing-mounted temperature and vibration monitors as problem indicators. The latter device employs an accelerometer and fast
Fourier transform (FFT) chip, providing a limited but indicative 1 kHz spectrum (a change in peak amplitudes flags a likely problem such as a misaligned rotor, or bearing failure, etc.)

IoT technology relies on radio communication such as LoRa but not exclusively. There is Bluetooth operating at 2.4 GHz with a range of ten metres and WiFi with about double the range.

Transmission of information relies on chirp spread spectrum (CSS) modulation wherein the carrier frequency (915 MHz for LoRa) is linearly varied over a small frequency range with a number of starting chirps (low to high) indicating the arrival of information. The information content consists of its that are denoted  by specific frequency excursions for ones and zeros (chips) with the weight (2N) of the ‘chip’ indicated by specific frequency excursions within the modulation bandwidth. 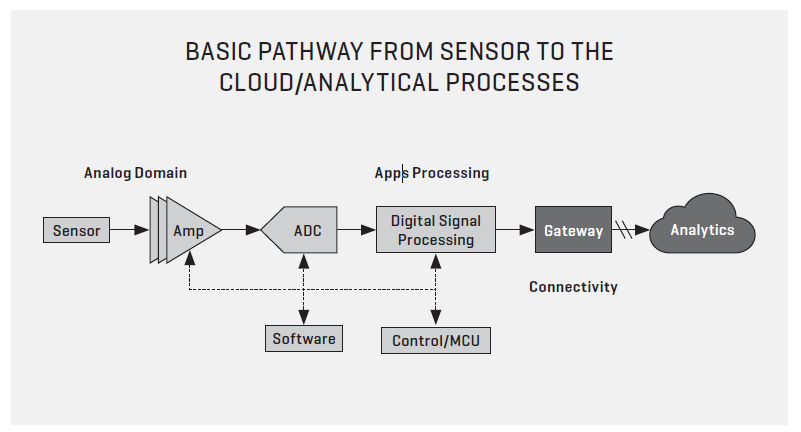 The diagram above indicates the basic pathway from sensor to the cloud/analytical processes.

Cloud computing is suited to Big Data applications tying the data from individual sensors to time and location and with the basic ability to create digital twins of the processes/hardware being monitored. Low power wide area networks require communication infrastructure like tower antennas, or routers equipped with antennas but in the absence of terrestrial hardware, satellite communication is available.

The IoT world is huge. Applications in health, agriculture, engineering and infrastructure are enhanced by the technology. Take electrical distribution, for example. IoT monitors dispersed throughout a network can provide instantaneous values of power, voltage and current and therefore make the task of network control with literally hundreds of thousands of solar PV rooftops pumping highly variable, weather-dependent, energy, possible. In the industrial world, IoT is part and parcel of Industry 4.0, a term coined in 2011 at the Hanover Fair. Industry 4.0 contemplates
cyber spacephysical systems that revolutionise the way in which production processes are designed.

Factories are developing into intelligent environments in which the gulf between the real and digital world is becoming smaller.

The electro-technical and hierarchical world of factory automation is transitioning towards smart factory networks, enabling dynamic reengineering processes and delivering the ability to respond flexibly to disruptions and failure.

The Australian IoT experience is still in early stages therefore providing great scope for entrepreneurial activity in areas of agriculture, mining and manufacturing as well as building
management.

Agricultural projects are part of Victoria’s regional development plans. The state government awarded NNNCo with a contract to develop connectivity via LoRaWAN. This will be an on-farm IoT
trial for 600 farms in the Maffra, Tatura, Serpentine and Birchip areas.

Mining offers some challenges because of the remoteness of many sites and thus connectivity problems. Projects involving automated haulage, vehicle telemetry and supply chain tracking are less likely to be fully deployed than projects involving static data.

To conclude; we have a way to go in using the power of IoT. However, there is every reason to apply its power. Combined with machine learning, for example via neural networks, IoT can be the front end of AI systems and provide us with vibrant industries and technology exports.