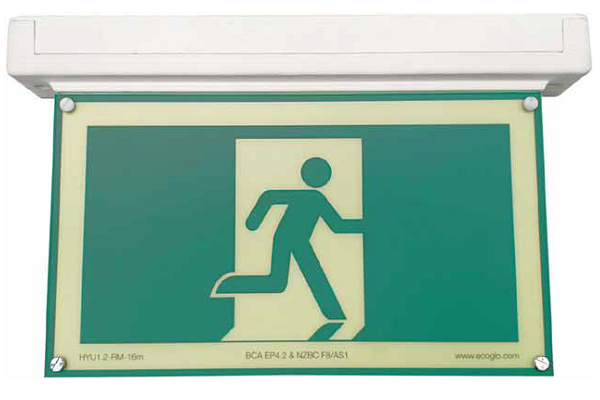 Ecoglo International has won worldwide recognition for its slimline photoluminescent (PL) exit signs that glow in the dark for hours using energy harnessed from surrounding light.

PL signage, suitable for all commercial-grade buildings including healthcare, educational, industrial and office complexes, is a technologically advanced alternative to conventional exit signage, which typically consists of a translucent box fitted over a powered light bulb or similar light source, along with a back-up battery in case of power outage.

In their simplest form, PL signs are completely ‘passive’, meaning no electrical connections or back-up batteries are required.

In places where ambient light is poor or irregular, such as internal corridors or stairwells, a small array of LEDs above the PL sign provides the ongoing energy required to charge the PL panel. This sort of PL sign is known as a ‘hybrid’ because it can derive energy from both ambient light and its own LEDs, and it is this class of exit sign that Ecoglo has revolutionised through its latest research and development program.

Ecoglo’s new hybrid exit sign sets new standards in terms of its simplicity, enhanced reliability and energy efficiency, as well as unrivalled life expectancy: this is great news not only for building occupants, but also for facility managers who are required by law to ensure that all signage is always in perfect working order.

Developed in conjunction with consultant electrical engineer Roger McKenzie, from R2B2 Engineering in Christchurch, New Zealand, the heart of the new sign is its innovative circuitry, which was developed with a completely fresh approach.

The first step in the development process, Roger explains, was to recognise the main advantages of hybrid PL signs over competitors’ products, and to then enhance those benefits for even better outcomes.

“We focused on creating the right product for the market rather than just refining existing generic technologies,” he says.

“We realised that what customers valued most with their hybrid signs were reliability and a trouble-free, long average lifespan, so that was our starting point. People who invest in PL exit signage don’t just want an effective and long-lasting signage product, they also want to minimise the effort involved in maintaining their signage assets.”

“By contrast, conventional illuminated exit signs are all about effort: lights and batteries have to be checked routinely, which means maintenance crews are continually accessing high places with lots of safety gear to worry about,” Roger says.

Given the core values of product reliability and superior average lifespan, McKenzie says all components of the new hybrid sign’s LED driver circuitry were simplified to function at a fraction of their operating ratings, thereby relieving stress on materials and improving life expectancy.

A major breakthrough was the decision to abandon ‘one size fits all’ universal components.

“Universality might be appropriate in the circuitry of a portable device like a laptop, but a fixed hybrid sign installed in a single location does not require universal functionality, which only adds unwanted complexity to the circuitry,” he says.

Another decisive feature of the new circuitry relates to light output: conventional circuits try to regulate light output, “whereas we allow the light to vary and in doing so have less circuitry.”

This emphasis on targeted, product-specific design attributes is equally evident in the hybrid circuitry’s ability to withstand transient conditions, as can occur during natural events like lightning
strikes. Such events can quickly degrade the life expectancy of a product. This protective feature, Roger adds, is subject to a patent application, underscoring the originality of the design.

The new circuitry delivers outcomes that truly matter to customers: a whopping 200,000-hour average lifespan – more than double that of its predecessor – and a warranty of 10 years. “We estimate that our sign will have 15% of the failure experienced by our closest competitor,” Roger says.

According to Ecoglo’s Technical Manager, Mark Watson, the new hybrid exit sign has been resized to accommodate the specific minimum requirements of New Zealand and Australian applications.

“The other thing we have reworked is the installation interface; the new sign is a lot more user-friendly for electricians,” he says.

Taking into account both the new circuitry and revised panel characteristics of the new hybrid sign, the result is an incredibly energy efficient device that uses just 0.5W of power. This represents a better than-fourfold improvement over its predecessor.

“It also reinforces how energy-efficient our PL hybrid signs are compared with conventional illuminated products, which can use up to 5W,” Mark says.

“Savings in energy costs are meaningful, of course, but reduced greenhouse gas emissions are an equally powerful consequence of the energy efficiency we’ve been able to achieve.”

“Ecoglo has grown to become an international leader in the field of emergency visibility products through non-stop innovation and research and development over the company’s 23-year history,” Mike says.

“Our new hybrid exit sign is the latest expression of our commitment to original design.

“The best innovation is always a team enterprise – we are grateful not only to Roger McKenzie for his stellar contributions, but also to the New Zealand government’s industrial development support agency, Callaghan Innovation, which contributed funding towards the project.”