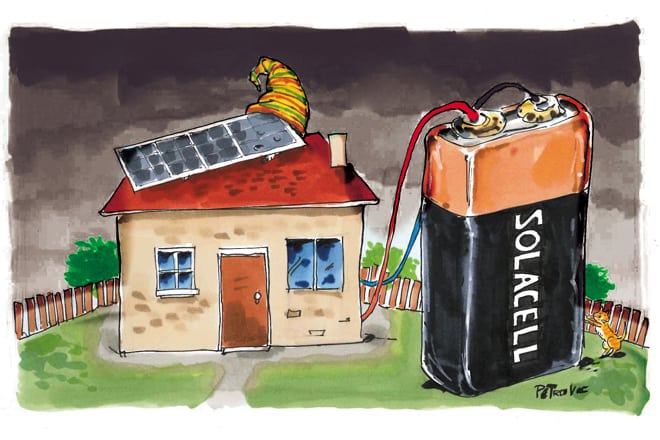 The way we provide and consume energy is destined to undergo a paradigm shift – and maybe much sooner than we think. Jacob Harris explains.

Energy storage has been hailed by many as a game-changer for the power industry – touted to do to the energy market what Web 2.0 did to media consumption. And while the technologies on the market today aren’t sufficiently advanced to make it an economically viable option for most, it may only a matter of time before the energy market landscape changes forever.

John Grimes is chief executive of the Energy Storage Council (ESC) and the Australian Solar Council (ASC) and has seen a dramatic increase in focus on the energy storage issue over the past 3 years. While the market in Australia remains embryonic, John has seen a particularly strong pull towards on-grid energy storage in conjunction with solar, and a steep overall rise in market awareness and consumer interest in the emergent technologies.

“One of the big spin-offs of the billions of dollars that has been ploughed into electric vehicle research in places like China and the US has been energy dense, compact and relatively inexpensive batteries. Most developers are using Lithium-ion technology – the same as in cell phones, laptops and many power tools – so people are pretty familiar with that kind of battery. These have been scaled up to be used in domestic or small business applications.

“There are a range of products available now that look like anything from a mini bar fridge through to a full height fridge that will store anywhere between 1kWh to 10kWh of electricity,” says John.

This gives solar customers the ability to store energy acquired in peak generation times that would otherwise be exported, for little or no return, back to the grid. They can then use this energy when it is needed and reduce tariffs paid to utilities, or avoid them altogether.

“People are increasingly looking for energy storage sufficient to capture energy production mid-afternoon and use it when they get home in the evening. So it’s about time shifting from when the energy is produced to when the customer actually needs the energy in their house.”

The problem with the storage solutions currently on the market is that prices are prohibitively high if any economic gains are to be made by the process.

“Today there are solutions available to buy that will cost you the equivalent of about 30c per kWh. That’s still a bit high for most of us because grid electricity sells for around 25-28c per kWh on average. But in some parts of regional Australia people are paying energy rates upwards of 42c per kWh so in those cases it’s already a viable money saving solution,” says John.

However, technologies are evolving rapidly and several new products that could significantly reduce storage costs are poised for imminent release.

“I’m aware of three companies that are coming to market this year with solutions that will be significantly cheaper. Once you have a battery storage solution that delivers you energy at a cost less than you can buy it from the grid, it starts to get really interesting, and will open up a lot of market applications.”

Tesla’s Powerwall unit, due to hit the market towards the end of the year, is already available for pre-order and is reportedly experiencing overwhelming demand. The sleek, wall mounted Powerwall units will be available in 7kWh and 10kWh sizes with the ability to ‘stack’ up to nine units to fulfil a range of energy requirements.

German company Daimler AG is also primed to enter the market with Mercedes-Benz branded, scalable Lithium-ion batteries. And Panasonic is currently conducting Australian tests on an 8kWh unit the company estimates will double a household’s self-consumption.

“According to research done by the Rocky Mountain Institute, places like Hawaii will see mainstream adoption of the technology as early as 2018. Australian conditions are actually very similar – our energy prices are some of the highest in the world – so it’s not unreasonable to assume Australia will be operating on a similar time frame,” says John.

“That will shock many people because there seems to be a pervading view that energy storage is still five to 10 years away, but that’s just not the case. I joined the solar industry in 2008 when there were 22 MW of installed solar in Australia now there’s 4 GW. So rapid change is something we’ve seen before in the industry and I think the conditions are similar for energy storage as they were for solar.”

As is often the case with rapidly developing technologies, Australian standards – that were written around lead acid batteries – are going to have to play some pretty serious catch up. To this end Standards Australia recently announced that they are forming a working group to update the standards in relation to energy storage. The ESC will be part of that process, and sit on the committee.

“We want long term, safe, reliable, high quality energy storage solutions for Australia. We don’t want to see systems that are half baked come into the market and cause injury or damage. It would be really bad for an industry like energy storage so making sure that what we do at this early stage is world’s best practice is what we should be aspiring to.

“We also need to engage in a positive way with utilities. We need to understand the technical issues that they face and how the application of energy storage can help them deliver against their mandate. We don’t want to set up a situation where it’s us or them, where the utilities block out energy storage because they’re fearful that it’s actually taking market share away from them.  So engaging in a positive way with the utilities and the regulators is really important for our industry and that’s the other primary focus of our work at the moment.”

Such is the opportunity presented by power storage technology, Electrical Connection will continue to investigate the storage sector and profile any advances to the technology on offer.