This solar panel paving system can illuminate freeways and produce energy for nearby communities. It even has the potential to produce more clean renewable energy than a country uses as a whole, writes Callum Fitzpatrick. 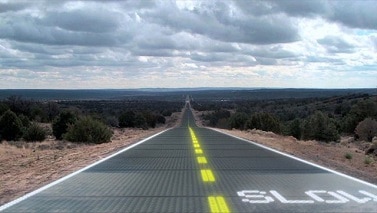 If the idea of driving your car over solar panels sounds like an angry protest against green technologies, you probably haven’t heard of ‘Solar Freakin’ Roadways’.

Made from tempered glass and invented by American couple Scott and Julie Brusaw, Solar Roadways is a modular solar panel paving system that can be installed on roads, parking lots, bike trails and will eventually be fit for freeways.

Scott, an electrical engineer, says that you’d be forgiven for worrying about the prospect of a glass road, but he assures us that the panels have been exposed to rigorous conditions.

“Our glass surface has been tested for traction, load and impact resistance in civil engineering laboratories around the US and it has exceeded all requirements,” Scott says.

“When you temper glass it becomes over four times stronger than non-tempered glass. Bulletproof and bomb resistant glass is made with laminated tempered glass.”

The results of extensive testing has shown that these hexagonal panels can withstand heavy vehicles and inclement weather, and can also generate more than enough electricity for the local area. 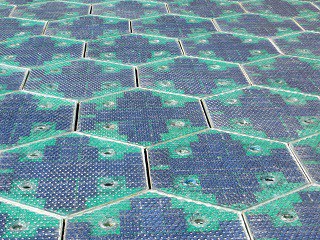 The technology also features a heating element to stop the road from freezing and LEDs to produce illuminated road lines. Attached cable corridors can even store and treat stormwater and provide a ‘home’ for power and data cables.

The potential impact on the electric vehicle (EV) market is also huge. Solar Roadways would provide a capacity for charging stations in parking lots and driveways, using energy from the sun instead of fossil fuels, and once a roadway system is in place, mutual induction technology could allow for charging while driving.

“We talked with the civil engineers who conducted the traction testing and they assured us that the testing involves trucks, cars, motorcycles and bicycles. So if you don’t slip on asphalt or concrete, you won’t slip on our glass. It is textured to provide at least the traction that current asphalt roads offer,” Scott says.

Two types of surface prototypes have been made so far. The first is a semi-smooth walking surface that allows a car travelling at 65km/h in wet conditions to stop within the required distance. The second is designed for highway use and achieves the same results with a car travelling at 130km/h on a wet surface.

If there is a malfunction within one of the panels, an internal microprocessor can communicate wirelessly with surrounding panels. So if one stops communicating, the rest of the panels can report the problem.

“A technician could load a good panel into their truck and respond to the scene, swapping and reprogramming the panel in minutes. The damaged panel would then be returned to a repair centre. Think how this compares to pothole repair!” Scott says.

What’s more, because the road surface is heated, the road doesn’t freeze, meaning that potholes could potentially become a thing of the past. Any water that hits the road can be dispersed through the stormwater capture section of the cable corridor.

“The resultant stormwater flows off of the road and through the grates to a filtration area. The water is gravity fed through filtration socks and into a storage tank below the frost line. The water can be discharged into an existing drainage system or it can be pumped from the storage tank in either direction along the road. Destinations may include a bigger filtration facility, an aquifer or an agricultural centre.”

A common misconception is that existing roads would need to be ripped up to accommodate Solar Roadways, but Scott says that this isn’t the case.

“We will make every attempt to reuse the current surface for the foundation at our installation sites. Less substrate is required for sidewalks and driveways than roads. Some preparation would obviously be necessary and raceways could be cut in for cabling. This will save prospective customers from the expense of paying for a new foundation.

“Civil engineers will make the determination at each site as to the viability of the existing pavement, but if it is viable we will use it, if not, it can be recycled.”

Solar Roadways already has the backing of a number of power and utility companies in the US.

“Many companies have told us horror stories about overhead and buried power lines. They love the idea of moving cabling into our cable corridors where they can have easy access to them, no one can dig into them and fallen trees can’t bring them down.”

Also, because Solar Roadways features a decentralised system, it allows for added security and efficiency.

“Most of the power is produced and used near the power source – such as driveways that power homes, parking lots to power businesses and excess power feeding surrounding neighbourhoods,” Scott says.

“Most power plants and solar arrays are centralised, so they provide power from a central location and send it out via transmission lines over a long distance, which leads to substantial loss. Centralised power plants also create security risks as they can be taken out by hackers and targeted by terrorists. Entire sections of a country can be left powerless by such attacks.

“On the other hand, if a terrorist detonates a bomb in the middle of a solar road and blows the road completely in half, both sides of the damaged road still produce electricity and nobody loses power. A decentralised power grid offers much needed national security.”

Any excess energy is placed back into the grid during daylight hours and can be drawn back out at night. Energy storage devices can also be added to the system, such as batteries and flywheels in the cable corridor for easy access.

The technology is still in its very early stages of development, but it has already received more than $A900,000 in seed money from the US federal government and raised more than $2 million via crowd funding website Indiegogo, showing that it already has support from the public.

According to early calculations (made with very conservative numbers), if Solar Roadways is integrated across US roads, it could produce over three times the electricity currently used in the country and slash greenhouse gases by up to 75%.

Currently, the only completed project is in the company’s headquarters in Sagle, Idaho. This consists of 108 prototype solar road panels – roughly equivalent to a 3,600W solar array. However, now that the Indiegogo campaign has been successful, the team is looking to move into production quickly, with local projects already lined up for city sidewalks, a train station platform and an airport tarmac.

Shining a light on fluoro tube and ...