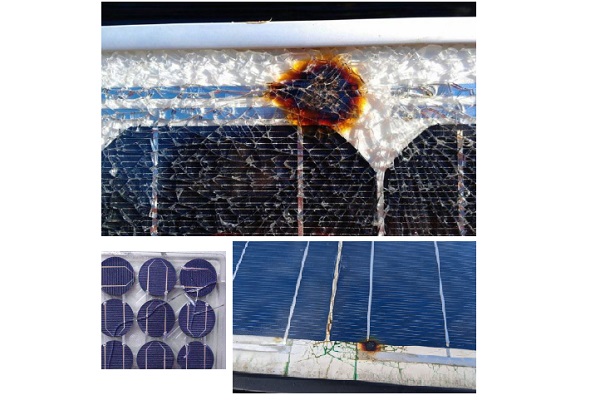 Phil Kreveld looks at some of the reasons why hotspots can occur in solar panels and what you can do to help avoid them.

Rooftop solar installations are such a common sight that the technologies behind them could easily be considered unimportant.

However, ‘set and forget’ – perhaps an attitude understandable for domestic appliances – is not appropriate for solar installations because there are many factors that contribute to their efficient
operation. In this series of short articles we focus on those necessary for their proper functioning, including:

In talking to solar installers there are differing views on the importance of post-installation check-ups but there is a common thread of them being aware of ‘installation cowboys’, who give their industry an undeserved, bad name.

There is a belief, a solar installation being a static one, no moving parts— with the possible exception of fan cooling in the inverter—that essentially nothing can go wrong. It is therefore not
until the owner of the system notices an increase in their electricity bill that alarm bells ring.

The reasons could be panel failure, inverter failure or an unfortunate occurrence of frequent high line voltage causing the inverter to switch off AC power production. Regular inspection of
solar systems is uncommon but there are contractors, particularly in country areas, who either provide a service contract option, or who will keep an eye out on their customers’ systems.

Obvious potential problems such as debris, leaves, dead birds and other small animal life caught between panels and the roof can cause excessive local heating or excessive leakage current to
earth can be eliminated before trouble starts.

Solar panels of good quality come with meaningful guaranties of performance and can be expected to perform efficiently over decades but even so, untimely failure of panels is always a distinct possibility.

No matter the care taken during installation, micro cracks in the glass surface of panels possibly caused during transport or during placement, can in due course, cause panel failure or at least,
reduce panel efficiency sufficiently that reduction in power output is more than a few percentage points.

Simple panel assembly tests are open circuit voltage measurement and short circuit current measurement, isolating the assembly with the DC isolation switch. Resistance to earth of the
positive and negative rails are also good indications of panel health by spotting changes in the measured values over time.

There are solar PV insulation testers available that facilitate insulation resistance tests without having to short circuit the panels.

Grime and moisture are bad combinations for increased leakage current to earth. Earth leakage current is also ‘frowned upon’ by the networks because it can increase injected DC current beyond allowable limits (apart from operating the ground fault relay and shutting the system down). Note: close to 100% of grid tie inverters are transformer-less, and the functional earth is that of the main installation at its switchboard.

Hotspots in panels can develop through faults in manufacture, through opens in bypass diodes or some other reason but with the same effect, the avalanche breakdown of a cell (the photovoltaic cell is a current generator and a diode in parallel—normally not conducting, and reverse biased if the cell is shaded).

In practice, testing bypass diodes is a bit of a pain. They are frequently encapsulated, therefore precluding tests but if accessible, then testing is possible, for example in ground installations. There are special purpose bypass diode testers that allow open and short tests in broad daylight. Panels can continue to operate more or less satisfactorily in terms of string current but if finally, an open occurs, the whole string is knocked out therefore causing a notable decline in inverter power output.

Although not frequently used for domestic installations, the I-V (current and voltage curve) tracer is ideal for testing panel performance as well as string tests. An actinometer measures the intensity of the sunlight, and a ‘sweeping panel load’ traces out the current-voltage curve of the panel. In some instruments this can be compared to standard panels by reference to panel model/type stored curves.

Testing instrumentation can be limited by using AC/DC clamp meters that have sufficient range to measure open circuit voltages and that have Hall effect clamps suitable for DC current measurement. They are therefore well suited to measuring the operation of inverters as both DC power and AC power can be measured.

You can safely bet on the market for solar systems continuing to increase and also that proper operation of domestic systems will be more and more important. Why? Because in due course—it’s already mooted by the Australian Energy Market Commission (AEMC) that domestic connections will have to pay a fee for the ‘privilege’ of being able to pump out power—and irrespective of whether solar systems are working or not.

Leading the way with digital

Breaking waves in the solar world