Breaking waves in the solar world 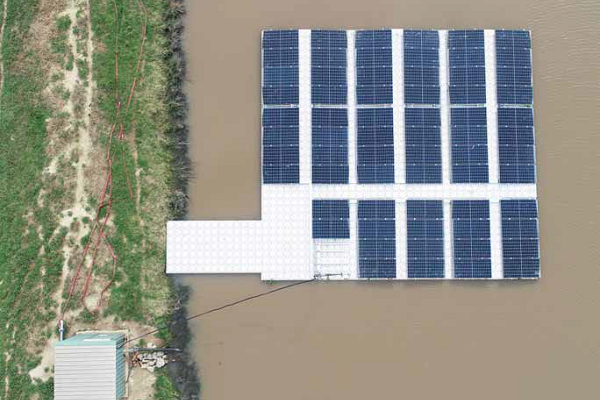 As world economies begin to pick up the pieces after the pandemic, one Melbourne company believes that floating solar can play a bigger role than anyone might expect. Anna Hayes found out more.

Still a relatively new concept, floating solar has been turning some heads, and tides, in Asia which has overtaken Europe in its deployment of floating solar, according to a new Institute for Energy Economics and Financial Analysis (IEEFA) report.

From having less than one megawatt installed before 2019, Asian nations now have over 51 megawatts of floating solar installation with a further 858 megawatts planned.

The report, which was authored by energy finance analysts Sara Jane Ahmed and Elrika Hamdi, points out that power demand in the Philippines and Malaysia dropped by up to 16% during the COVID-19 lockdown, causing extreme stress to electricity grids due to excess power.

Sara Jane says: “If the COVID-19 outbreak is to teach one lesson, it would be that utility companies need agile operations, not outdated power stations that burn coal 24/7 and cannot respond quickly to sudden changes or outages.”

Floating solar farms, she says, can produce clean energy at prices that can compete with power from polluting coal-fired plants.

She adds that such facilities are best installed near hydropower facilities where they can piggyback off existing connections to electricity grids.

“The combination of floating solar and hydro on existing dams and reservoirs trumps the economics of adding new base-load coal-fired power plants on grid systems such as the Java-Bali network that already have generation overcapacity.”

About 18 months ago, Electrical Connection explored the notion of floating solar, or ‘floatovoltaics’ as it’s been dubbed, in Australia, finding that at that time it was in that uncomfortable space between concept and commercialisation.

For Gavin Hodgins, chief executive of Melbourne-based FloatPac, it has been an interesting year-and-a-half of realisations. In that time, the company has installed a 30kW system in Brimin,
on the Victoria/NSW border, in addition to its 17kW demonstration system in Thornton, Victoria.

“We installed 30kW in Brimin and we were fielding a lot inquiries but what became apparent was that a lot of people that we were talking to, who were solar guys and saw an opportunity with
FloatPac Solar, really wanted to push us to a point on pricing where it didn’t make any sense for us to provide product.”

This led to a decision to begin lead-contracting the projects, and the company has begun to focus on identifying projects that they can push forward, in a post-COVID world, with the tying-in of manufacturing and other areas of priority for the government.

Gavin says: “Floating solar offers the government another opportunity for jobs but it goes beyond that because we’re manufacturing the floatation component locally and that brings manufacturing jobs which, at the end of the day, are the sort of jobs that a lot more Australians need to get back involved with. They tend to be long-term jobs of ten to 15 years.”

What has followed is a period of research and identifying areas where between five and six gigawatts of floating solar could be installed, close to existing infrastructure such as old coal mines or near hydro power outfits.

Currently, in terms of renewable energy, a lot of equipment and materials need to be imported but Gavin says they are starting to answer the call for the sort of long-term job opportunities that
will be highly sought when it comes to rebuilding Australia’s economy.

“When you look at projects that are two to three gigawatts, you say that even to produce 250mw per annum, that’s a ten to 12-year project. You need so many machines, you need this many
people installing it, etc. It worked out that, to produce 250mw a year, it would result in about 500 to 600 jobs. And they are basically ten to 15-year jobs because you’ve got a program of works
of say 250mw per year but you’ve got to install 2.5-3gw.”

In an economy that has spent decades preoccupied with coal mining, the idea that renewables could prove to be as big an economic booster is a little ironic. And, according to Beyond Zero
Emissions, Gavin says that it’s a sector that could be even bigger than just the 600 jobs he’s been talking about.

“Beyond Zero Emissions released a big report on a million renewable jobs and some of the numbers they were talking about were quite unbelievable. When you look at the number of people who are directly or indirectly employed in Australia through coal mining and coal fire power stations, Beyond Zero Emissions said the number would be maybe 100,000 people. But they’re looking at renewable energy programs of work where they can go and employ a million people.”

He points out that such a figure would have had traction last year but, with massive job losses as a result of the pandemic it was, all of a sudden, an even more impressive figure.

Beyond those economic factors, Gavin says that geography plays a big part in the deployment of solar technologies.

It might sound silly, given that there’s a giant gap of space in the middle of the country that nothing but snakes and spiders is using.

“With all those very big farms that get built in the middle of Australia, a long way from anywhere, those big installation have suffered very badly from marginal line loss factors and all of the things that the industry has always dealt with about just how far electricity has to travel from where it’s generated to where it’s consumed.”

Gavin says that they have identified a number of locations, within 60-70km of Melbourne where solar farms could be installed over water where, within that radius, there is no land available.

“Floating solar does represent a significant opportunity to be able to put utility scale floating solar systems much closer to the point of consumption, which is then going to drop marginal line loss factors and therefore make the systems more profitable.”