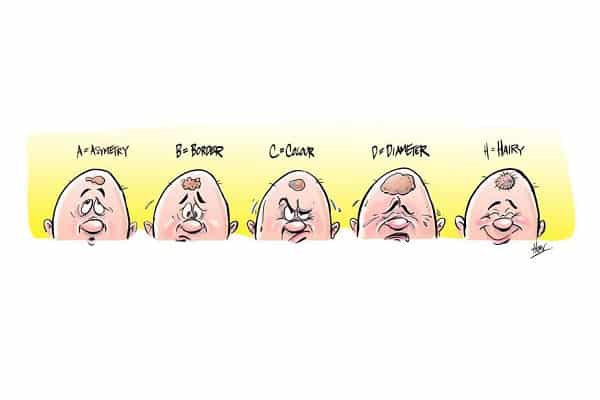 Bob came into my room, took off his well-worn cap and pointed to his scalp.

“This thing on my scone keeps growing back Bernie.”

Bob was about my age, follicularly challenged like myself and an outdoor worker. He had the red, sun damaged, dry skin of that vintage.

I look back on my days growing up in Hawthorn and I’m amazed that I’ve only had one skin cancer myself. I remember getting horribly sunburnt every summer and in fact promoting it with the application of coconut or baby oil so that I sizzled like a barbecue. I remember spending every moment I could at the old Hawthorn Baths without any use of sun protection. It didn’t exist then and the risk of skin cancer with sun exposure wasn’t properly realised and certainly not acted upon.

The great cricket man Richie Benaud (may he rest in peace) had recently gone public about his fight with skin cancers, a legacy of the many hours of unopposed sun exposure throughout his distinguished cricketing career. Having been a flannelled fool myself for many years, I pay tribute to another great cricketer in Greg Chappell who invented his trademark wide brimmed hat which in my opinion has been a very powerful but unrecognised public health tool. A lot of the skin cancers occur on the scalp, side of the face and ears and this particular piece of sporting apparel has probably prevented innumerable skin cancers in cricketers.
“Fine piece of cricketing apparel that,” I think Richie would say.

I looked at Bob’s scalp and immediately saw the problematic skin lesion. It was about a centimetre in diameter, with a slightly raised edge and an angry crater inside. It needed to come off in order to firstly get rid of it and secondly to find out if it was in fact a skin cancer. Importantly, we needed to determine what type it was. I arranged to do this for Bob as well as checking the rest of his skin for other suspicious spots.

The prime cause of skin cancers is excessive sun exposure (95-99%) and your risk of skin cancer doubles if you have had previous sunburn episodes. I have certainly had my fair share of those while growing up in the sun filled sixties and seventies. I remember the agony of the severe burning pain throughout the nights after being sun burnt as well as the strips of peeling skin falling off in the days following. A good legacy of that unpleasant experience and the advent of the Slip, Slop, Slap campaign starting in 1981 was that I can’t recall any of my three children ever being remotely sunburnt. My wife and I were meticulous in them wearing hats, protective clothing and applying copious amounts of sunscreen. Some argue that this has resulted in the epidemic of Vitamin D deficiency in the community but that problem can easily be corrected with some supplemental Vitamin D if required.

Eighty-one per cent of all new cancers in Australia are skin cancers and by the age of 70, two out of every three Australians will have developed one. Australia tends to be the skin cancer capital of the world with skin cancer rates three times that of our nearest rivals.

Every year there is nearly half a million new skin cancers diagnosed with over 2000 deaths. I hate to think of how many undiagnosed skin cancers are out there as well. The incidence of skin cancers is increasing, probably due to more cases being detected. Fortunately, with programs such as Slip, Slop, Slap, the rate of the rise in cases is slowing and with early detection the survival rates are improving with the five year survival in the order of 90-odd per cent. This should improve further with time as us Baby Boomers and our sun ravaged skin pass on and replaced by our skin protected offspring.

TYPES OF CANCER
There are basically two main types of skin cancers. Ones that arise from pigment cells or moles called Melanomas and another from non-pigment cells which consist of either Basal Cell Carcinomas or Squamous Cell Carcinomas. There is a third group of pre-cancerous skin lesions which includes solar keratosis and a specific one called Bowen’s Disease. The melanoma group tends to be the nastier one.

1. Melanomas
They are the commonest cancer in males between the ages of 15 and 44 and overall they are the fourth commonest cancer behind prostate, bowel and breast cancer. There are over 11,000 reported new cases per year with males contributing 50% more cases than females. It causes about 1500 deaths per year with males being three times more likely to die from it than females. I think that says more about females being more likely than males to go to the doctor to get a suspicious mole checked, hence making the diagnosis earlier and improving the prognosis.
Melanomas arise from pigment cells and as such are generally coloured. However, there are some that aren’t coloured called amelanotic melanoma which can be difficult to pick just by looking at them. Melanomas can have a tendency to spread and may turn up in other parts of the body many years after excision. It is because of this reason they need close supervision for many years. People with a large number of moles are more prone to melanomas, as well as those with a family history of melanoma and those with previous excessive sun exposure and sun burn.
Melanomas can occur on any skin surface, even on the soles of the feet where they may go unnoticed or turn up at the back of the eye. I describe them as being a bit schizophrenic or unpredictable.
The basic rule applies that if a new mole appears or an old one changes – get it checked promptly.
Change may be assessed by remembering ABCD & H.
A stands for Asymmetry or irregular shape. Most moles are oval or circular in shape. If there is irregularity in shape, best get it looked at.
B stands for the state of the Border being irregular in depth – raised and lumpy. Most moles are flat or are uniformly raised. If one part of it appears or feels more raised than the rest then it is check up time.
C stands for the Colour of the mole. Most moles are brownish and have a uniform colour. If a mole has more than one shade of colour and especially if that is a darker area, let your doctor have a peek at it.
D stands for the Diameter or size of the mole, especially if it is greater than half a centimetre or if it is generally increasing in size.
I throw in an H as well – this refers to the fact that if it has a Hair coming out of it. The hairy moles look ugly and everyone thinks that they must be horrible but interestingly it is the exact opposite as it means the mole is well developed and hence unlikely to change into a melanoma.

2. Non Melanoma Skin Cancers: BCC & SCC (Basal Cell and Squamous Cell Carcinoma)
Non-melanoma skin cancer is the most common type of skin cancer. This type of skin cancer is more common in men, with almost double the incidence compared to women. Nearly 500,000 people are treated for one or more non-melanoma skin cancers in Australia each year.
BCC’s are the commonest but least serious of skin cancers as they rarely spread but they may locally grow and cause problems. They classically have a raised pearly edge, but may be an area of red irritated skin or a sore that fails to heal. They are generally found on sun-exposed areas of the body.
SCC’s can occur on any part of the body but like BCC’s, they occur mainly on sun exposed skin. They have a small but significant risk of spreading to other areas of the body if left for too long. They often arise from those hard bits of skin (solar keratoses) that grow on the back of your hands, scalp, face and ears. Both BCC’s and SCC’s are seen more often in men and particularly in those who work outdoors.
The best way to treat skin cancers is to prevent them. And that can done by adhering to the following:
– Applying a Sun Protection Factor 30+ sunscreen at least 20 minutes before exposure, remembering that it only takes 15 minutes to burn and it doesn’t have to be a blazing sun to do it.
– Avoid the danger times of 10 am to 3 pm where 70% of the damaging UVB radiation occur.
– Wear a hat, especially if balding! Caps don’t cover your ears and the tops of your ears are a prime area for skin cancer. If you are going to rely on a cap then make sure your ears get a good lathering of sunscreen.
– Wear protective clothing as much as possible (ie. long sleeves).
– Wear sunglasses.
– Moisturise daily. This may not be a very blokey thing to do but I think it is very important. Skin that is very dry is more likely to be damaged by environmental factors, especially UV radiation. Women have known this for eons and are fanatical about moisturising. Their motivation is the dreaded A word – ageing. We blokes tend not to worry about that. But now there are a lot of great male moisturisng products with SP factors in them as well which will also help prevent skin cancers. The sun may not be as aggressive in the cooler seasons but UV radiation is still there so daily application all year round is a good idea. My regime is a daily application of a good Aussie product called Beauty Mate moisturiser to my face, balding scalp, ears and backs of hands as these are the main areas that I see skin cancers. And it is not a sissy thing to do but not sure about the beauty bit.

Treatment
Your GP will either remove the skin lesion or arrange for a surgeon to remove it so that it can be sent for testing. This is called an excisional biopsy. Depending on what the pathology report says will determine what follow up is required. If the lesion is a BCC or SCC and it is completely removed then that should be curative. If some is left behind or the lesion is a Melanoma then a surgeon will be required for a wider excision and sometimes a skin graft to fill in the defect. In some cases radiation therapy may be recommended to mop up any rogue cells around the area.

If your doctor is confident that the lesion is visibly a keratosis or at perhaps the most a BCC, he or she may elect to remove it by freezing it off with liquid nitrogen or burning it off with electro cautery. Some blokes are plagued by vast numbers of those hard, scaly and scabby solar keratoses on the scalp and back of the hands. There are often far too many to cut or burn off but now there are some very good skin creams which can be prescribed by your doctor. These have an anti-inflammatory or immune effect and can clear up a problematic area very well.

The bottom line with skin cancers is to prevent them before they occur. If it’s too late, get them seen to at the earliest possible time so that the proper treatment can begin. Skin cancer, in particular Melanoma, has taken many wonderful people well before their time. Listen to the beautiful voice of the late Eva Cassidy singing “Over the Rainbow” and wonder what might have been if not taken by melanoma at 33 years of age. And from a footy perspective I have to mention the late and great Melbourne AFL captain and Irishman, Jim Stynes who passed away after a three year battle with metastatic melanoma in 2012 at age 45. Then of course, more recently, the legendary Richie Benaud…

Look after yourselves. Stay happy and healthy and go Hawks!

In a nut shell