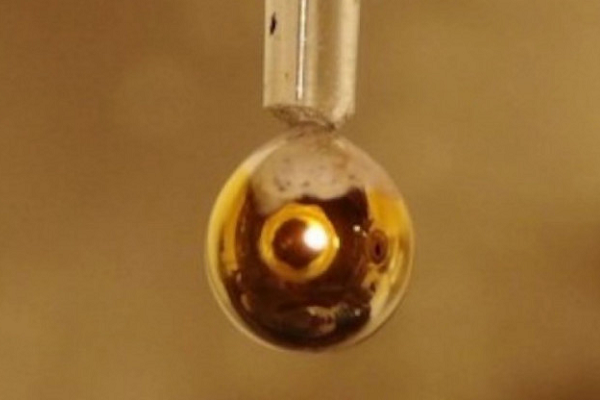 Scientists at BESSY II have been able to produce an aqueous solution with metallic and conductive properties for the first time ever.

The experiment pressurised water to such an extent that the orbitals of the outer electrons overlap, creative a conductive band with freely moving electrons. This level of pressure is only present in the core of large planets like Jupiter.

They did these experiments at BESSY II, a third-generation synchrotron radiation source that produces extremely bright X-ray light and managed to avoid a potential explosion by not putting the metal into the water but rather by pouring a bit of water onto the metal.

“You can see the phase transition to metallic water with the naked eye. The silvery sodium-potassium droplet covers itself with a golden glow, which is very impressive,” BESSY II supervisor Dr. Robert Seidel says in a statement.

“Our study not only shows that metallic water can indeed be produced on Earth, but also characterises the spectroscopic properties associated with its beautiful golden metallic lustre.”

The thin layer of gold-coloured metallic water remains visible for a few seconds, enabling the researchers to prove with spectroscopic analyses that it is indeed water in a metallic state.

The researchers are still discovering where this technology can be used.