The science of wind turbines

Love them or hate them, wind turbines play a part in meeting our rising demand for electricity. Phil Kreveld explains some technicalities associated with the giant windmills. 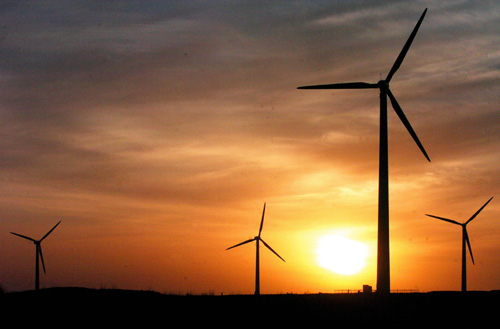 One of the arguments often used against wind power for electricity generation is its sporadic nature: in the mainstream view, base-load requirements are best met by thermal power stations.

If the wind blows, that’s nice. And, if it continues to blow, the power might augment base capacity.

There’s no room here for philosophical discussions on how much better renewable energy sources are for a ‘greener’ world. Rather, we will look in some detail at the technical aspects of grid-connected wind power generation and erase some false impressions.

As you will see, wind power is more expensive than conventional power. However, the small country of Denmark generates 3.2GW (20% of its needs) this way and balances it with thermal power.

The knockers of wind power usually don’t go too deep into the technicalities. The variability of wind can be balanced in part by geographically spreading the generating plant. The longer transmission lines can be used more efficiently when wind power is in combination with gas turbines, engine-generators, etc.

Wind power has a place in power generating infrastructure, which will consist, for example, of base-load generators (probably thermal), various reserves in case of breakdown and peak-load plant (perhaps hydro or gas turbine).

Wind power, in spite of its variability, can support base load. The maths involved is complex but the simplified approach taken here is generally valid.

Take a grid with 7200MW capacity, including 1200MW of wind power. On the basis of 30% availability, average wind power available is 360 MW. Thus this amount of power could be ‘retired’ from the thermal capacity.

However, the variability of wind power requires the addition of peak load of just over half the average wind power, ie: 200MW. The peak load capacity could be from gas turbine plant – much less costly to build than thermal base-load plant but much more so in fuel.

The trade-off is in terms of relatively few hours required to make up shortfalls in power due to the wind dropping. The hours required can be deduced from a plot of hours versus mean power in MWhr/hr.

The graph is illustrative but it models what might typically pertain in a wind farm site. For about 1000 hours (11.4%) in the year there is little or no wind, and a source such as gas turbine power would be required.

The response time of a thermal power station is too long to take account of sudden variations, but it can regulate (follow load requirements) when wind power varies slowly over days or hours. Therefore the argument is false that wind power is too unreliable to take up a substantial portion of grid requirements.

The cost issue is complicated, but wind power is about twice as expensive per MWhr as coal-fired energy, taking into account plant lifetime on a full costing basis. However, the cost of wind power, a relatively new technology, is forecast to fall in today’s dollars. The cost of coal-fired power, a well-developed technology, is seen as constant.

The power of the wind

Windmills, by virtue of basic physics, are unable to extract the wind’s total energy: the fraction they are able to extract is theoretically 0.593 (the Betz coefficient). The maximum energy from a windmill whose blades describe a rotation area of A square metres normal to the wind, and ? is the density of the air, is given by:

Plugging figures into the above equation, a 10 metre/sec wind speed yields 647W per square metre.

Note that this is the ideal situation for a windmill. It requires control of pitch (angle of blades to plane of rotation) and yaw (angle of rotation plane to wind direction).

In practice the Betz coefficient is not achievable: 30-45% is considered to be adequate efficiency.

With each increase in blade diameter, the power available goes up as the square. In the above example, increasing blade diameter from 20m to 30m would boost output to 1MW.

Modern practice is to focus on one turbine type of sufficient rating to handle the largest blades. Any scaling down is achieved by using smaller blades.

At constant shaft speed in step with grid frequency, the angle of attack increases with increasing wind speed. The blade will ‘stall’ at a certain angle of attack, as the air can no longer flow smoothly or in laminar fashion over the rear side of the blade. Lift is reduced, drag increases and the rotational speed drops off.

Constant-speed machines have been largely replaced by variable speed types, which can make more effective use of available wind power.

Fixed-speed turbines are the earlier type – simple, relatively low in cost but suffering from substantial disadvantages.

They feature an induction generator connected directly to the grid, which supplies magnetising current.

This generator type is an induction motor whose rotor is run at super-synchronous speed and thus puts energy at line frequency back into grid.

The simplest type is the squirrel cage induction generator (SCIG). Maximum motor torque (and absorbed power) is available at slip speed, and maximum power is generated just above synchronous speed.

A soft starter allows the machine (initially functioning as motor) to come to speed with the blade-gearbox combination, bringing the rotor to above zero slip speed (functioning as a generator).

The fixed-speed wind turbine has the advantage of being reliable and well proven. Because the excitation for a SCIG is sourced directly from the grid, it continually absorbs reactive power (increasing with speed) and is incapable of controlling its terminal voltage.

These issues pose challenges in terms of controlling the voltage and balancing the reactive power demands in the power system, which can affect system stability. A capacitor bank is necessary to provide reactive current.

Wind speed variations cause fluctuations in the electrical power on the grid. In the case of weak grids (those with relatively low associated generation capacity), the power fluctuations can also lead to large voltage fluctuations which, in turn, will result in substantial line losses.

The constant-speed feature of an SCIG comes about because of the balancing of two torque forces – one resulting from the windmill and the other being the counter torque applied by the rotor against the geared shaft connected to the blades.

If a fault occurs, the counter torque of the rotor (which had been putting power into the stator windings) falls away and the SGIC accelerates to dangerous speed. Depending on the duration of the fault, the slip may be at a sufficiently small value to regain its stable value after fault clearance. If not, the rotor slip can increase permanently.

Variable-speed turbines are able to extract power over a large range of wind speeds.

One way of achieving this simply is by employing a wound rotor induction generator. By using an external variable resistor bank, the slip can be variably controlled, much as it would occur in a motor.

Using a synchronous generator can provide an output with varying frequency and power, requiring a power converter between the grid and the generator. This is a AC to DC conversion stage, DC energy storage link and line-synchronised inverter.

Wound rotor synchronous generators are directly connected to the grid without an interposing power converter. The rotor winding is supplied with DC power via slip rings. Because of the stator connection to the grid, the rotor speed supplies a synchronous rotation excitation field, its speed being determined by the number of rotor pole pairs.

New developments include multi-pole machines, which eliminate gearing. They can operate directly with low-speed windmills. The transverse flux generator operates essentially as a synchronous machine. It can include a large number of poles, making it suitable for direct gearless applications. However, the generator has substantial leakage inductance and can have a poor power factor.

For remote networks a combination of wind and diesel generators may be an adequate but not very stable arrangement.

For grid connection there are aspects that require attention. The output voltage of typical turbines is below that of most transmission grids, and transformers are usually part of the turbine.

In the case of grid failure, turbines must be disconnected to prevent danger to personnel working on transmission lines. Switchgear must be incorporated to prevent ‘islanding’.

With significant wind turbine generating capacity, such as the 17% in the example in the first part of this article, some instability tendencies can develop.

In periods of light load and high wind speed, wind power contribution will be at a maximum. If these fluctuations in wind power are within the regulation capacity of other power generating plant in the grid, there is no problem with stability.

On the other hand, the overall economics of dispatching plant power on the basis of generating-transmission costs becomes very complicated.

More than 80% of Australia’s electricity requirement is coal generated (a future article will examine nuclear energy as an option for part of the base load).

Most of the remainder is generated by hydro and gas. Wind turbines contribute about 2% of energy needs (about 4TW/h). Developments in recent years include the Waubra Wind Farm, close to Ballarat in Victoria. There are 128 wind turbines (each rated at 1.5MW) with a total capacity of 192MW, associated substations and an operations centre.

Waubra is the third-largest wind farm in Australia, after the Hallett Wind Farm (298MW) and Lake Bonney Wind Farm (279MW) in South Australia.

Wind power requires substantial capital investment in turbines. This confuses the issue, as fuel costs are zero but the capital amortisation component is higher than for conventional energy.

There are many ways of doing the bookkeeping, but on the basis of about 20 years over which to write off the investment, wind power comes from behind compared with coal.

One thing we need to get comfortable with is that there is no single easy way of increasing the penetration of renewable energy.