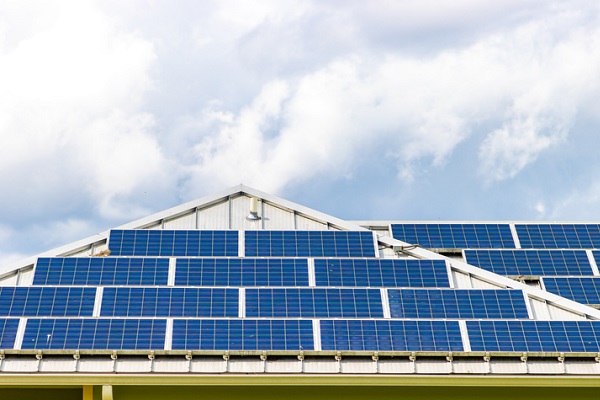 As solar power is increasingly adopted across the country, there are plenty of opportunities for electricians to open steady revenue streams. Phil Kreveld writes about the ins and outs of solar installation and maintenance.

One in five Australian homes has rooftop solar and installations are growing. We are, when it comes to solar uptake, the foremost country in the world—and also in the top range of renewables in our national electricity grids.

That makes for considerable challenges in maintaining grid reliability because of the ‘banana’ characteristic when at midday very little power is needed from generators because we are making our own electricity.

Working with the ‘banana’ (lots of power needed at 7am, very little at noon and back up by 6pm) is the Australian Energy Market Operator’s (AEMO) business but making sure that domestic, commercial and industrial solar are working efficiently is the business of electrical contractors with Clean Energy Council (CEC) certification.

Oops—having said that, many electrical contractors, although they may have actually done the physical installation, are not the primary contractor with warranty responsibility. However, there is everything to be said for offering solar system owners annual service contracts. The topic will be explored further because there is a lot to be discussed that feeds into the good sense of regular inspection.

The big power stations with huge boilers, steam turbines and generators have teams of specialist trades, continually checking plant and carrying out running repairs as well as comprehensive maintenance schedules during programmed ‘shuts’.

The mini power stations mounted on roofs—they are more or less ‘set and forget’ installations but should that be the case?

That’s a huge number of the order of 12 to 15GW of power contribution during some periods—and virtually all from solar systems. Not only are more homes and companies installing solar, but the average capacity is growing, up from 5KW for domestic installations.

The numbers tell us that solar contributions to power are already too significant and more so in the future to treat solar systems as ‘electric kettles’. ‘Switched on’ owners of solar love to check on how their systems are performing and have smart phone apps communicating with their inverters. There are also monitoring systems available for purchase or rental providing a record of power being generated.

Notwithstanding the good value in monitoring, solar systems are subject to things not readily monitored, for example the solar panels themselves. There are also safety aspects, in particular DC isolators which can be the cause of system breakdowns and fire.

Orientation of panels obviously is mostly unaffected: houses stay rooted to the ground but overshadowing by neighbouring constructions are a different matter and council permits don’t cover nearby solar installations that might be affected.

The good sense behind solar panel testing requires a bit of understanding of the physics of what is actually a sophisticated technology.

Rather than digging into the ‘silicon’ and spying on electrons being expelled from their tied positions in silicon crystals as photons of visible light hit them, we will discuss the equivalent circuit of a solar cell (shown in figure 1a).

The heart of the solar cell is the current generator, marked I (current due to the electrons that are lifted into the ‘conduction band’ of the silicon). It is the business end but there’s more to consider. Across the current generator is a resistor, Rs, which unsurprisingly is to be expected and is of a high value and a diode, D.

In figure 1b, the current-voltage characteristics of the diode are shown. In the ‘forward’ direction, also the direction of current flow, I, the diode is a high resistance until the ‘knee’ at approx. 0.5V is reached, after which, the diode resistance is very small so that 0.5V is a cell’s maximum, open circuit voltage. The diode also has a dark current (very small) but if biased in the opposite direction, that dark current increases and then ‘avalanches’ in to very large current, heating and destroying the photo cell. Evidence of hotspots caused by avalanche events can be found in many solar panels—the hotspot cell in question may not have been destroyed but is compromised. 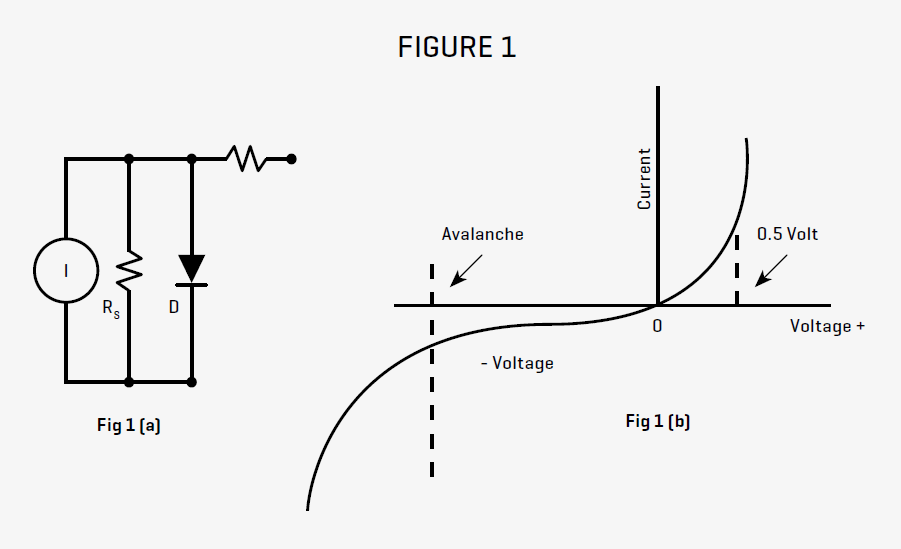 Solar cells are connected in series strings, for example 60 cells, with an open circuit voltage of 60-times 0.5V (30V).

In figure 2a, three cells are shown is series and in figure 2b, the middle cell is not generating current, I, because no light is hitting it. No external load is connected. The two remaining cells circulate their own current, each through its own diode.

In figure 2c, an external load has been connected so that the current, I, has to flow through the diode of the middle cell but it is now reverse biased, something that should be avoided as discussed above. If the middle cell had an anti-parallel diode, externally mounted across its terminals (figure 2d), load current would bypass the dark cell and avoid possible destruction of the cell. The idea of individual bypass diodes for each cell is receiving serious consideration but it is a matter of cost versus enhanced performance. Making do with the conventional four or three bypass diodes per domestic use solar panels is accepted practice.

In figure 3, the arrangement of a string with four bypass diodes is shown, each bypassing 15 cells. A single dark cell, therefore, reduces the open circuit voltage of the 60 cell panel by 15 x 0.5V (7.5V), actually, a little less, because of the forward voltage drop of the bypass diode. Bypass diodes are usually not accessible, being encapsulated in the panel structure but nothing other than accessing the combiner boxes (and shutting the system down) will allow the measurement of the open circuit voltages of individual panel string assemblies and therefore suspect strings with faulty cells. The identification of an individual panel is then required, may be of ten or so in a typical string, requiring access to the roof.

Of course, reduced open circuit voltage can also be due to a shorted bypass diode. An open bypass diode, on the other hand, doesn’t show up in an open circuit test. A night-time test, isolating an individual string and using an impedance meter on low ohms range in reverse panel polarity will show up an open or multiple opens in a string.

A string with a shaded cell or several shaded cells has a reduced maximum current output by virtue of increased series resistance of the inactive cells and therefore a lowered maximum power point.

This might seem unexpected because active cells in the string should be unaffected, receiving the same sunlight intensity as was the now shaded cell. However, this is resolved by thinking in terms of equivalent circuits. 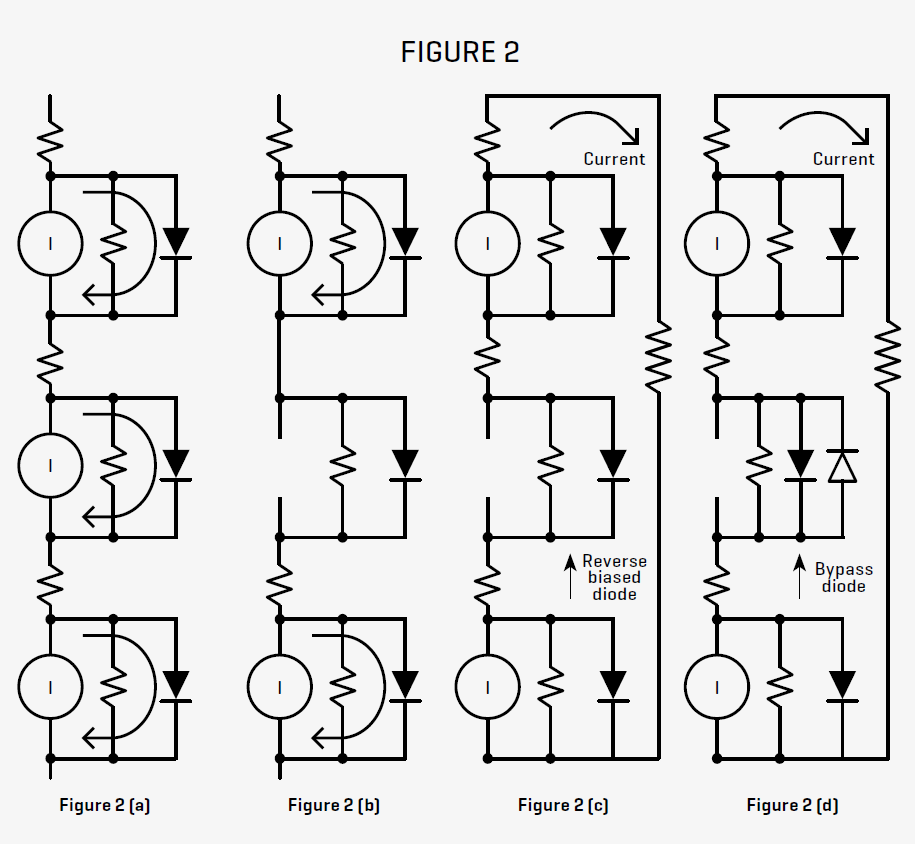 There are three active cells in a series. They each produce current, I, which circulates through the external load, Rext. In electrical terminology we are dealing with a current generator of value, I, but it is not perfect current generator because as we have seen in the equivalent circuit of a single cell, figure 1a, each cell has a shunt resistance, Rs. The resulting total string with one shaded cell, is still ‘trying’ to produce current, I but it now has and additional Rs (from the shaded cell) in series with the external load Rext. Power is lost in the non-producing cell, equal I*Rs2 and therefore not available to the external load.

In practice, the string current reduces (see section on maximum power point which also deals with current source conversion). If bypass diodes are activated, they represent a much lower resistance in series with the external load, and less energy is therefore lost in the string. Bypass diodes are very important components, particularly in cases where there are rapid changes in shadowing, for example nearby trees subject to wind. The Schottky diode is often used because of its low forward voltage but is subject to thermal runaway, having a high leakage current. If mounted in junction boxes, these should have good cooling capacity. 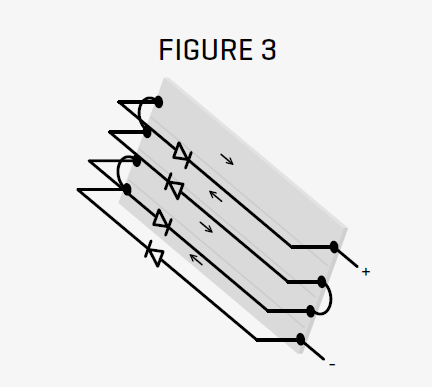 Blocking diodes are an essential item in solar panel powered battery chargers, preventing discharge of the battery into solar cells whose voltage has dropped below that of the battery. Blocking diodes are therefore also desirable in hybrid solar systems in which the solar cells, battery and DC link of the inverter are in line. Blocking diodes can be part of individual strings (uncommon) or in parallel groups of strings. They do a different job to fuses, commonly encountered in combining boxes, in that they isolate a string with a lower voltage output.