Features
Home›Features›NECA WaTT: The next generation of electricians

NECA WaTT: The next generation of electricians 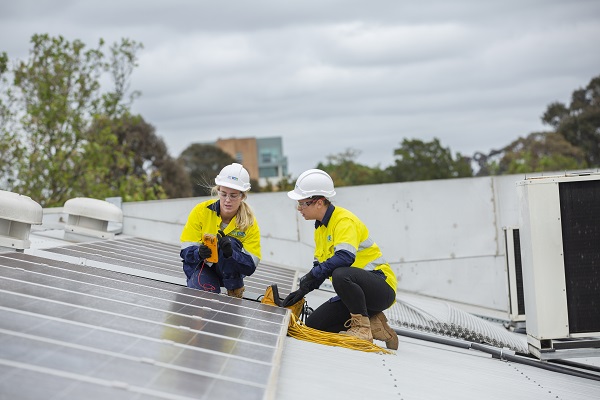 Making up only 8% of the industry, there’s a need to bring more women into the electrical industry. Sean Carroll speaks with NECA Education & Careers to find out about its latest campaign.

Women make up around 8% of the electrical industry which is higher than it was in the past, but it’s extremely low compared to other industries across the country.

“So NECA Education & Careers has always had it in its vision to build and grow this side of the industry. Since about 2015, we’ve always had our female footprint at about the 10% mark. But in 2020, it dropped to 8%. And that was a big blow.”

One of the counters to this dip in female electricians, the WaTT campaign and it wants women to identify that, either after leaving school or looking for a mid-career change, the electrical industry is a viable pathway.

The WaTT campaign aims to remove the barriers to women entering a historically male-dominated trade like electrical.

It will see 25 women over the next two years engage in their electrical apprenticeship with NECA Education & Careers. The association will follow these 25 through to completion and arm them with the tools, resources and support that they need to get ahead in their electrical careers.

The project is also about introducing the viability of the trade to other women and girls.

“We want to make electrical available and if you can’t see it, then you can’t be it,” Stacey adds.

“We want to say to these women: Join us, get your hands dirty, grab a couple of tools at the Try Your Trade sessions and ask any questions you have.”

Outside of the school programs, NECA Education & Careers acknowledges that a lot of the women who join the electrical industry are coming in as adults, usually looking for a mid-career change. Because of this, part of the WaTT initiative is supplementing host companies who take on these mature-aged apprenticeships for a junior apprentice while Apprenticeships Victoria and NECA Education & Careers pay for the difference between a wage for someone of their age.

“What we’re finding is that one of the biggest blockers to a career in the electrical industry (for both men and women) is that contractors don’t want to pay more for an apprentice who has the same amount of experience as a 21-year-old,” Stacey says.

“We’re putting our money where our mouth is, assisting to fund the difference between the junior and adult rate of pay.”

Additionally, the apprentices receive important training like resilience, mental health and financial planning. Stacey says that the mental health training is great for women in the industry but also for the trade as a whole.

The proof is in the pudding

“As a mature-aged apprentice, I feel like I’ve taken the more scenic ‘let’s get lost along the way’ route which has been great fun and I don’t want to change it,” WaTT apprentice Jacinta says.

“But sometimes, I think it would have been nice if trades and programs like WaTT were more of an option back in year 12 when you’re pretending that you’re a grown up and making huge decisions about your life.”

Jacinta went from working in hospitality to picking up odd jobs here and there before deciding electrical work was something she’d want to pursue. The issue was, as she applied for several apprenticeships, she encountered the blockers that Stacey has mentioned, until she got in touch with NECA Education & Careers and joined the WaTT project.

Katrina is another successful applicant to the WaTT project. She says that after losing interest in study at the University of Melbourne, she started working in civil construction, working on large projects like the Western Road Upgrade in Victoria.

One day when on a break, she says she got talking to some electrical apprentices about their work: “You could see how happy they were to be employed by NECA and you could hear it in their voice.

“I explained my concerns and very confidently they told me NECA employs the highest number of female apprentices, and they are always looking for more women to be represented in the electrical industry. This gave me an enormous feeling of confidence and I knew I had to apply for an apprenticeship.”

She says that by lunchtime that day, she had decided to call NECA Education & Careers and start the process.

“I would encourage anyone interested in an electrical apprenticeship, especially any women out there, to make that call because it’s the best decision you’ll make.”

NECA Education & Careers adds that a lot of the apprentices that come on board through their avenues will get the opportunity to work on the Victorian Big Build projects, getting knee-deep into some of the biggest sites in the country right from the get-go.

Being the change we want to see

One of the best aspects of the WaTT campaign is that NECA Education & Careers ensures that all women that come on board have an electrical mentor who acts as their industry careers consultant. This mentor will go out with the apprentice on site to help with any questions they may have, chat with the host supervision and make sure they’re being exposed to a broad range of experiences within the industry.

“What would we say to someone reading this? Get in touch with us. We want all electrical companies to build better businesses and we believe that diversity is a great way to do that,” Stacey says.

“Bringing in a female apprentice not only helps make the companies better, but it helps out the entire industry.”

NECA Education & Careers says that while getting 25 women on the tools is the goal right now, the long-term vision is to smash the 10% representation that the they have right now, getting it up to 15% and more.

“We want the industry to understand the benefit of employing women,” Stacey says.

“Laying the foundations for generations to come.”