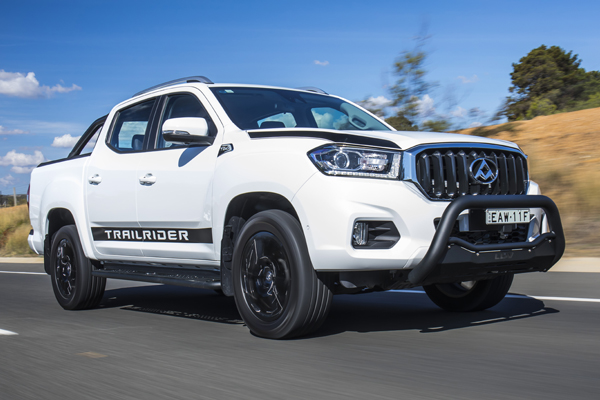 Chinese brand LDV has introduced a specially tailored T60 dual cab ute for Australia, dubbed the Trailrider, which goes a step further than many other special editions by including a local suspension calibration applied at the factory.

With the T60, Walkinshaw engineers carried out extensive local testing and tuning in Victoria in collaboration with LDV to produce a new shock absorber rating, with the calibration then taken to the production line in Wuxi, west of Shanghai, where it was adapted to the Australian-spec ute before being shipped over here.

At this stage, the calibration only applies to the Trailrider, which is limited to 650 units, but a good response from the market could see it become a permanent fixture, particularly given LDV/Ateco has emphasised that the suspension was modified “to produce ride and handling that is more in tune with Australian consumer preferences” and “ideally suited to Australian road conditions and driver requirements”.

The Trailrider is based on the T60 Luxe flagship, which runs a different calibration for the double-wishbone front and live-axle leaf-sprung rear suspension to the lower-series Pro version. The Pro was deemed more likely to be laden with tools and equipment whereas the Luxe was expected to spend most of its time as a family or recreational vehicle, hence the individual spring and shock absorber ratings.

But, as most of the leading mid-size ute manufacturers have found, Australian buyers want a vehicle that can perform well in our conditions both unladen and with heavy loads, and operate as both a workhorse and a recreational vehicle. To typecast tradies as those simply looking for the cheapest model is also a mistake these days, as industry figures show that the overwhelming majority of mid-size ute sales are highly specified variants.

As its name suggests, LDV’s special edition is therefore something of a trailblazer for the Chinese brand. Apart from the suspension changes, the T60 Trailrider comes with increasingly common black cosmetic enhancements that aim to give a little more sportiness and pizzazz.

Combining with red, white, grey or black body colours, these include the 19” 12-spoke alloy wheels, the nudge bar, sports bar and side steps. A black grille replaces the chrome finish on the regular model, while a lockable black Mountain Top roller tonneau is fitted to the load tray. Topping it off, Trailrider decals are also applied to the bonnet, across the flanks and at the rear end.

The unchanged powertrain is a 2.8L four-cylinder turbo-diesel engine producing 110kW of power and 360Nm of torque, driving through a part-time four-wheel drive system with high and low range and a rear differential lock.

All T60 models are covered by a five-year/130,000km warranty with roadside assistance and a loan car program thrown in.

Treotham enclosure is versatile inside and outside ...