Igus’ e-spool flex 2.0: a cable drum without a slip ring 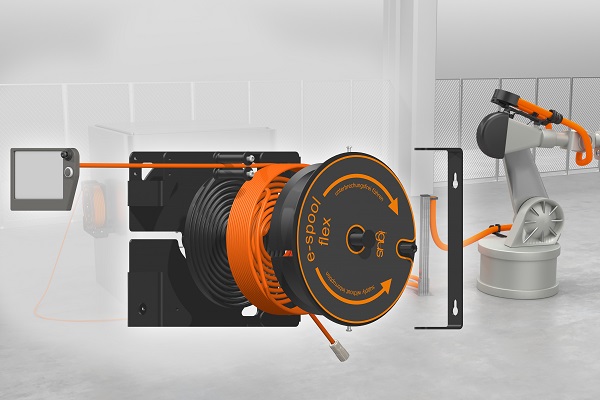 The e-spool flex 2.0 is the igus version of a cable drum without a slip ring. Cable diameters from 5mm up to 15mm can be used and it always safely routes through a feed-through to ensure that it is properly wound up at all times.

The previous ‘state of the art’ solutions for connecting the machine and mobile operating panel are simple and widespread, but no longer very effective according to igus. The programmer takes the panel from a holder on the protective housing or on the machine and then usually drags a cable along behind, which simply lies on the floor and – depending on the operator – remains there or is just reeled up on the holder.

This is probably the most common and – from the point of view of occupational safety – the worst solution, because the cable represents a source of danger as a trip hazard or may be damaged when run over by industrial vehicles. The first is being raised to more and more frequently by the employers’ liability insurance associations, the second can shut down the entire plant according to the saying, “small cause – big effect”.

The alternative: a cable drum with slip ring. The usual alternatives to this are cable reels, which use slip rings for energy and signal transmission in a rotating drum. In this way the user solves the problem of towing cables lying freely on the floor.

These cable drums are often only available as a complete package with a new cable, and the fast transmission of large amounts of data and media such as compressed air is very complicated with slip rings.

The third and new option is a cable reel with spiral guide instead of slip ring.

This initial situation was incentive enough for igus as specialists for the guidance of moving cables to develop a new and, from the user’s point of view, satisfactory solution in every respect. This solution with the designation e-spool flex 2.0 is now ready for high volume production and – in the first expansion stage – available from stock.

The e-spool flex 2.0 is a cable reel that allows cables to be guided from start to end without slip rings or other connecting elements. This is made possible by a spiral guide which reels the cable in a controlled manner when it is rolled up.

This new type of cable reel can carry all cables and hoses for the transmission of energy, signals, data, liquids, compressed air and vacuum without interruption. The user simply inserts the cable into the spiral guide and fastens the cable stowed in the outer and winding housing of the e-spool flex 2.0.

Constant tensile strain is thereby guaranteed, and the latching function of the e-spool flex 2.0 allows comfortable operation of the panel. And the much-discussed question in practice as to whether the emergency stop button installed on the operating panels may be supplied with energy and signals via slip rings which are subject to wear and tear, has also been resolved with the use of the slip-ring-free cable reel.

With this specification, the e-spool flex 2.0 is also suitable for retrofitting existing cables – and for guiding bus cables and hoses for compressed air, vacuum and liquids. The entire system is housed in a compact installation space and can be installed right on the machine enclosure or safety fence.