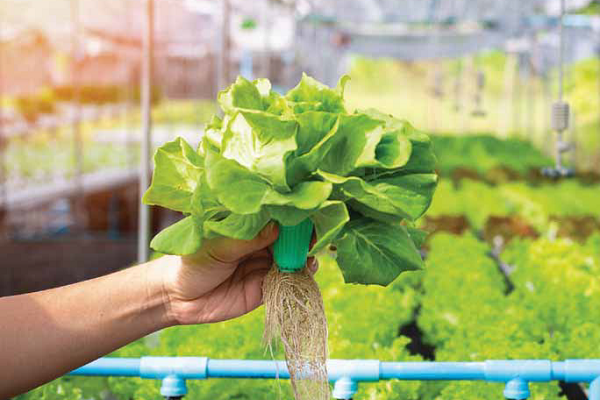 Greenhouse cropping is viable on small semi-rural and suburban areas. Phil Kreveld explains how LEDs can make the sector even more productive.

Light-emitting diodes (LEDs) have come a long way since they became commercially available in the 1970s.

At that time, the main use of what we call LEDs was in read-outs for calculators and other electronic devices.

These days, their application in artificial lighting for horticulture is opening up new market opportunities, particularly in meeting food requirements for the burgeoning world population.

Some estimates of population growth suggest a staggering nine billion by 2050. To prevent hunger and malnutrition, food production will need more arable land or a big increase in agricultural productivity.

According to a new report from Navigant Research, global luminaire revenue for horticultural applications is projected to reach $US3.8 billion by 2027. The report points out that LEDs offer improved efficiency, enhanced
crop yields and higher profits.

In the past two decades LEDs have been steadily replacing high-pressure sodium lamps in major horticultural applications. Navigant Research says lighting manufacturers are supplying tuneable LED solutions that support plants during various stages of their growth cycles. Lamp-illuminated horticulture dates back to the work of two US scientists, Borthwick and Parker, working at the Plant Industry Station in Beltsville, Maryland. In 1949 they published a paper on the use of carbon-arc lamps for growing Biloxi soybeans.

In Australia, a recent development in vegetable and fruit production is the Nectar Farms project at Joel Joel, near Stawell. The project involves Dutch technology in greenhouse construction (Kubo), and LumiGrow LED technology from the US.

However, there are many lighting technology companies in the horticultural market. Th degree of sophistication is high, with cloud-based software adjusting the light values and chromaticity of LEDs on a diurnal and seasonal basis.

In general, artificial light seems well suited to tomatoes, lettuce, leafy greens and/or micro-greens, flowers and basil and other herbs. The sun has a spectral wavelength range from 300mμ (milli microns or 10^9 metre) to in excess of 500mμ. Typically, the energy intensity is of the order of 400μW (micro watts)/cm2 in a 5mμ bandwidth. There are many examples of LEDs that virtually fill the spectrum of sunlight – and beyond, to include ultraviolet bands and far-red to infrared components.

The usual way of describing LED efficiency, indeed the efficiency of any lamp for general illumination, is the lumen per watt. For horticultural applications this unit is not of practical use because it takes into account the human eye response to light flux.

For plants, the micromole per Joule (Watt-second) is used as the quantifier. Rather than thinking about light as a continuous flow of energy, the quantum concept views light as particles (photons).

In an LED, the liberation of a photon requires about 1.6 electron-volts (eV) of energy. A micromole per Joule is equal to 6 x 1017 photons – the total number of photons released per watt-second.

Although figures will jump around, LED for horticultural purposes typically provide five micromoles per Joule.

The light quanta (photons) come in wavelengths from violet to red. The shorter the wavelength, the higher the energy for use in photosynthesis. In this process carbon dioxide from the air, water absorbed by the plant and light combine to produce oxygen and hydrogen, with the latter forming carbohydrates.

Growth is a dynamic process, so the ‘downpour’ rate of photon showers with the right wavelength (colour mix) determines the rate of growth, known as the photosynthetic activity rating, or PAR. Energy use is like determining the length of a piece of string, but as a very rough guide – with a crop area of 5-6m2 – LED power use is about a kilowatt.

The issue of generated light versus sunlight brings in the question of where the electricity is coming from. If it’s from coal sources, we release about a kilogram of carbon dioxide per kilowatt generated. For photovoltaic sources the figure is about 50g, taking into account factors such as panel production.

Plants absorb carbon dioxide so there is something akin to a cycle, even if not a closed one in the case of coal.

With solar photovoltaic panels (PV), under typical conditions above 35° latitude, about 300W is available per
panel with an area of 1.5m2 under ideal insolation conditions. In the first instance, converting sunlight photons into electricity and converting that energy into LED-generated photons seems to work in relation to energy balance.

The lighting efficiency parameters for horticultural applications are quite different to those applied to illumination, where account has to be taken of the retinal response.

An incandescent lamp, notoriously inefficient for lumen production per watt, rates much better if looked at from the total quanta output viewpoint (including the far red and infra-red wavelengths).

High-pressure sodium (HPS) lamps, according to some specialists in horticulture, can produce similar growth rates as LEDs because of similar PAR ratings.

However, it’s not just about that measure, as heat radiation can cause excessive stem growth in some plants, and this is a disadvantage with HPS.

LEDs can radiate heat in the opposite direction to the light emitted. Also, being physically smaller, they are suitable for insertion within canopies, thereby providing more production efficiency.

What finally happens in a plant leaf depends on the spectral absorbance, and that in turn is determined by plant pigments such as chlorophyll, the characteristic green colour. However there are also the yellow, orange and red of other pigments like carotenes, xanthophylls, etc. 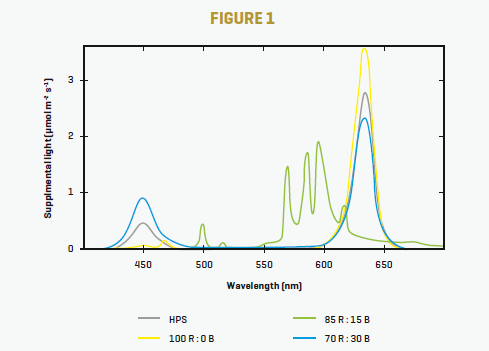 In Figure 1, the typical response curves for LEDs are shown as a contrast to HPS lamps. Note: a nanometre is also a mμ (milli-micron).The yellow curve indicates the HPS spectral response, and the LED curves are shown in admixtures of red/blue light for 100% red (red trace); 85% red, 15% blue (mauve trace); and 70% red, 30% blue (blue trace).

The total quantum flux emitted is identical for all curves at 70 micro mols/sec/m2. The strong advantage in using LEDs for horticultural applications is the flexibility available in spectrum distribution to suit particular plant varieties.

Information on specific control programs is hard to come by. However, we can make some general comments on important aspects:

Greenhouses make intensive cropping a viable business opportunity on small areas, even semi-rural and suburban environments, with 10 or more times the productivity of field-based agriculture. Furthermore, it is likely to be more water efficient in relation to water use.

Making the transition from conventional greenhouses to greenhouses plus artificial lighting seems like an obvious step in meeting modern food demands.