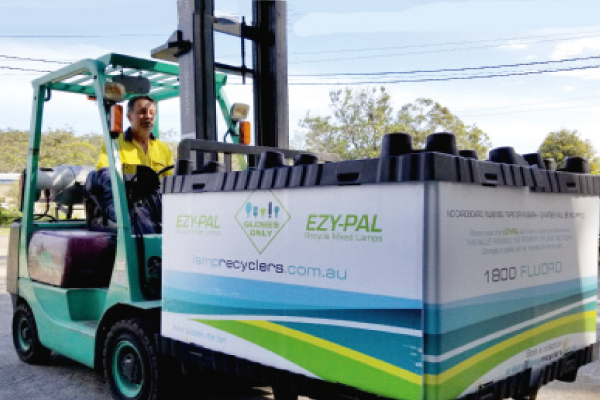 The FluoroCycle lamp waste recycling program is now entering its eighth year. Cameron Grimes takes a look at how the market has developed.

When dumped into landfill, mercury, which is an extremely dangerous chemical found in several lighting products, has been known to poison the water supplies of communities. When lamp waste is crushed in landfill waste sites it can potentially end up in water tables, and as such lead to mercury poisoning.

While a voluntary recycling scheme exists, FluoroCycle, ultimately it is expected that the collection and recycling of commercial lamp waste will become mandatory. But this will rely on the Australian government ratifying the Minamata Convention, which it signed in November 2013.

The Convention (a global agreement between governments) includes provisions regarding the management of waste containing mercury, including the disposal of lamps containing mercury in landfill. These provisions are aligned with work which has been undertaken by the Basel Convention, which addresses the treatment and movement of hazardous wastes.

Though not yet mandatory, responsible corporations, smart electrical contractors and government at all levels have chosen to sign up to the FluoroCycle scheme.

FluoroCycle is administered by Lighting Council Australia on behalf of the Federal Government. Its aim is to increase the national recycling rate of waste mercury-containing lamps. But the introduction of the scheme has also led to the development of several businesses that specialise in the proper disposal of mercury-laden luminaires.

Among the original collector/processor signatories to the scheme were CMA Ecocycle, Lamp Recyclers and Toxfree. These, and other, companies have been making steady in-roads into the installed base of hundreds of millions of luminaires. (Electrical Connection magazine was also the original media partner signatory to the scheme and has since promoted the program extensively.)

The recycling of fluorescent tube and lamp waste is a complex process that involves the separation of aluminium, glass, phosphor powder and plastics, which is achieved after the primary crushing of said tubes and lamps.

Once separated, the phosphor powder is heated in a distiller, turning the mercury into a vapour that is then condensed into pure metal.

The uptake of these recycling services largely started at the big end of town but over time, they have been embraced by smaller facilities.

Today, electrical contractors large and small are marketing the responsible advantages of recycling to their clients and that environmental message is getting through.

“I think there’s more awareness of programs like FluoroCycle as well as a genuine desire by customers to recycle, as opposed to the irresponsible landfill option. Last year, we recycled 1,100t of lighting waste,” Daryl says.

According to CMA Ecocycle, that equates to approximately 10-12% of recyclable lighting that exists in the market. Daryl adds that this number is destined to increase in states like Victoria, when a state-wide ban on e-waste in landfill comes into effect in July 2019.

With this increase and awareness in lamp recycling, Lamp Recyclers managing director John Field says a lot of electrical contractors are now jumping on board, but many have little knowledge of the recycling process so they don’t always appreciate the sensitive logistics required.

“What we’re finding with electrical contractors is a lack of planning in their recycling. We’ll get phone calls from contractors on particular days with the expectation that we can visit their site on the same day,” John says.

“As soon as contractors are on site and ready to change over lamps, they should contact us as soon as possible, so we can plan ahead and have an orderly removal of the waste.

Lamp Recyclers has pioneered a number of logistic options over the years as not every site requires a cumbersome metal stillage that holds a thousand tubes.

“We can efficiently bring back sizeable quantities from even remote places like the north-west of Western Australia with our approved Ezy-Return boxes. These are returned to us via Australia Post’s logistics system,” he says.

“In recent times, we have also launched a new solution called the Ezy-Pal, which is a pallet-sized container that folds down for easy despatch to clients, as no-one likes shipping air…

“However, what’s most exciting for us is our recent investment in a new crushing/mercury processing facility we brought into Australia. That’s been a big move for a company our size, but it demonstrates our confidence in a market that is growing strongly year-on-year.”

While Lighting Council Australia is charged with moving the market forward, it is the personal responsibility of everyone across the supply chain in the electrical sector to play their part in this product stewardship initiative. We need to remove the danger of this insidious chemical element from our environment.

Lighting Council Australia declined to make comment for this article.