Exploring the world of solar batteries in Australia 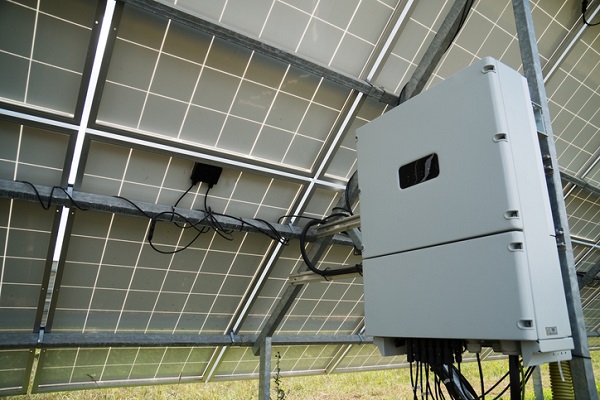 Phil Kreveld explores the world of solar batteries and what the technology means for us and our renewable future.

We are living in parallel universes when it comes to electrical energy. Gazing out of our windows, at work or at home, we see the trappings of yesteryear’s electrical distribution—poles, wires and transformers, while overhead our rooves are festooned with solar panels. And, now we are adding batteries to our basements and garages to store all that sunshine for use after dark—and to charge our still nascent fleet of electric
vehicles.

So, who needs the legacy of Nicola Tesla, the old-fashioned alternating current network that generations have ‘plugged into’?

Well, right now, we do—and will continue to do so until one of several scenarios has played out, which could be the disappearance of much
of the distribution networks in favour of microgrids shared by small communities—and the re-emergence of direct current as primary source of energy. But until then we’ll concentrate on making use of batteries to the maximum extent—and extracting benefit from two parallel universes.

Grid-tie inverters require an AC grid in order to function, with or without batteries as their primary or secondary source of energy. When the grid, for whatever reason goes ‘dark’, so too do the inverters as a safety precaution against accidental injury to maintenance personnel.

Some inverters can continue to function when physically disconnected from the grid by means of a transfer relay—since internal to all inverters is an AC voltage source with a frequency of 50Hz, more or less, responsible for supplying AC power by means of pulse-width modulation. The so-called anti-islanding feature of inverters as a safety measure, in the absence of a transfer relay, prevents the use of a
storage battery as an alternate source during grid failure. By using a transfer relay in the inverter assembly, power can continue to be supplied while the sun is shining, or the battery has charge left in it. 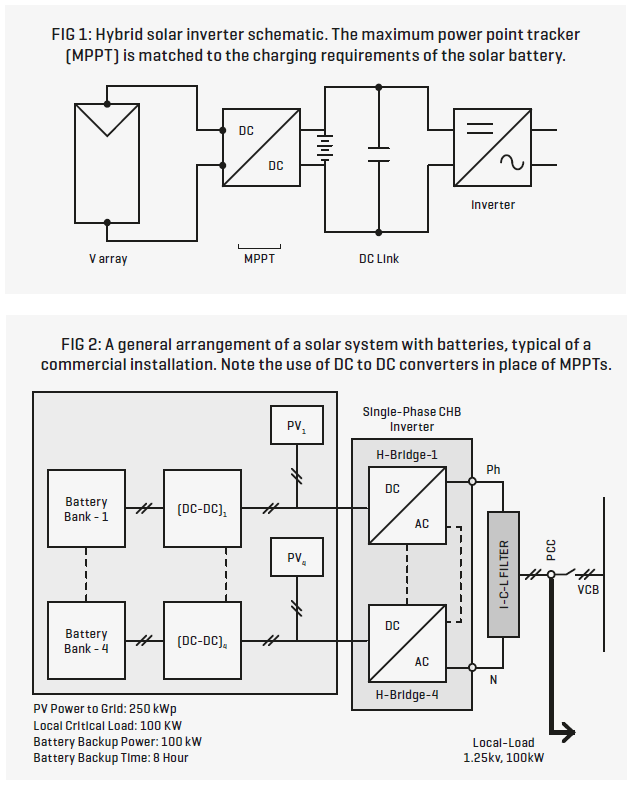 The conundrum is therefore whether the grid is needed at all since it might be avoided by individual inverters with sufficiently large storage batteries to cope with a continued bout of bad weather. Which brings us to the redundancy issue and a solution to the conundrum. An N+1 redundancy provides one alternative path to assured supply of electricity and that requires the connection to the grid.

The latter is not 100% reliable, although reliability as expressed by SAIDI (System Average Interruption Duration Index) for urban networks is very low, but likely to be higher in rural areas. However, redundancy comes at a price because as things stand, the cost of battery energy can exceed $1/kilowatt-hour!

Hybrid systems, as far as Australian domestic installations are concerned, interpose the battery between the solar panels and the inverter (see fig 1) so that the solar panels are continuously trickle-charging the battery while it is discharging to power the inverter’s DC link. As such the battery must, out of necessity, be a high voltage type for the transformer-less grid tie inverter as typical panel open circuit voltages are of
the order of 400 to 600 volts.

A single-phase inverter has to be suitable for 230 volts, or a peak voltage of 325 volts and therefore the DC link voltage must exceed that peak value and hence the minimum battery voltage is also determined. Hybrid systems require the solar panel maximum power point trackers (MPPT) to operate correctly with the battery connected to its output terminals although it is not a given that all maximum power point
trackers will operate correctly with a battery of nominally suitable voltage. Ideally such a hybrid system should be available as a package.

n general, hybrid systems do not require the interposing of the battery between the solar panel MPPT and inverter as shown in fig 2. Although connected in the DC path, the battery can be charged and discharged via boost/buck DC to DC converters (see fig 3) which illustrates a non-inverting type. Although there are differences in various charge controllers and maximum power point trackers,
essentially they all work in the basis of pulse width modulation. In the scheme shown in fig 2 the operating voltage of the battery does not have to be matched to that of the MPPT. 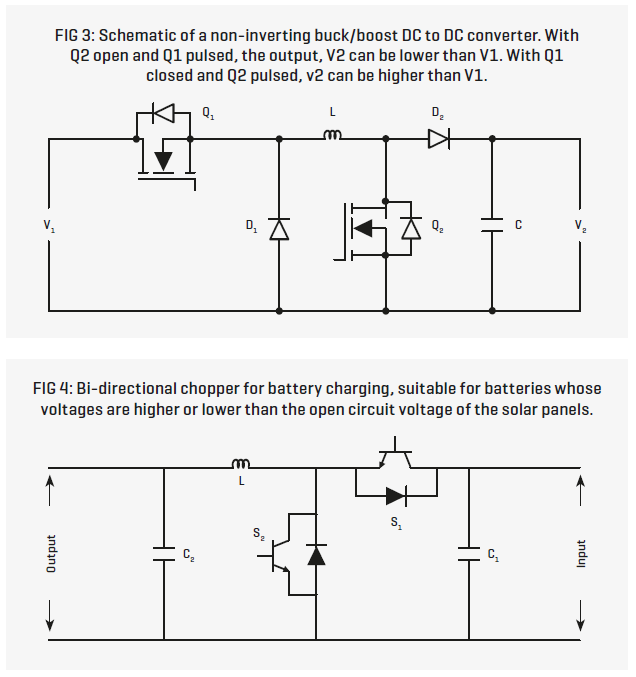 For example, a traditional 48-volt lead-acid battery bank can be employed with MPPTs operating at 400 volts or higher. Charging takes place via the buck mode, reducing the MPPT voltage, and through pulse width modulation, the charging current can be precisely controlled.

The reverse takes place in the boost mode to provide the required voltage to the DC link of the inverter. The DC voltage conversion process impacts the overall efficiency and this is unavoidable because of switching losses and heat losses in the finite resistance of the inductor. The basic step-up/step-down relationship is shown below, where D is the fraction of the switching period of either transistor Q1 (bucking) or Q2
(boosting).

With D bigger than 0.5, the circuit is in boost mode, at 0.5, the voltage ratio is 1.0, and with D less than 0.5, the circuit is in buck mode. The method described here, is one of many but is worthy of attention because it provides for flexibility in the choice of battery and solar panel open circuit voltage. However, it is uni-directional, whereas the bi-directional chopper-based circuit is suitable for battery voltages that
exceed the DC link voltage as well those that are lower (fig 4).

Off-line or DC and AC systems

The terminology can be confusing, in that even when described as off -line, the battery system in question might still be for use with a grid-tie inverter. The most straightforward type is an AC battery, which is charged via a converter and discharged via the converter’s inverter mode when supplying consumer’s load.

Basically all inverters can be run as AC to DC converters but in practice the appropriate equipment must be selected. So as to avoid the cost of a transformer, the battery voltage needs to be high enough when fully charged to service the AC main peak voltage as previously mentioned.

Prior to the commercial introduction of AC systems, the DC-DC conversion types were in use. These require buckboost voltage converters to reduce charging voltage to match that of the battery (buck mode) and to build up the voltage (boost mode) for the inverter.

However, as is the case for the hybrid, in-line system, the cheapest way of charging the batteries is via the solar PV system, which needs to have a sufficient rating for the consumer load plus battery.

The AC battery is wired in parallel with the consumer load and is therefore available to power load even if there is a line failure provided there is transfer switch wired in. The battery can also, in effect, take the place of a hot water system, utilising cheaper night rates to replenish charge.

The lithium-ion battery is probably the most frequently encountered type. It is characterised by a very high energy density and requires a battery management system to equalise cell voltages.

A newer technology is the saltwater battery. The main difference between this and other energy storage options (for example, lithium-ion and lead-acid batteries) is their chemistry. The electrolyte is a liquid solution of salt, which captures, stores, and eventually discharges energy. Whereas a traditional lithium-ion battery uses the element metal as its primary ingredient for conducting electricity, a saltwater
battery uses sodium, the same element found in table salt. The saltwater in the system means that there is essentially no fire risk with this technology.

Additionally, toxic metals and other materials that mostly occur in lead-acid or lithium-ion batteries, are avoided.

The technology was first used by AGL in 2016, in Adelaide and maybe gaining some traction. Although the batteries are available for domestic/commercial and industrial energy supply, they are primarily intended for network support, principally providing system strength by feeding in power during times of required frequency support.

The initial installations in Adelaide by AGL use cloud-based software to control the battery charge and discharge modes. The use of solar PV
systems for voltage regulation is well-established by way of reactive leading or lagging power injection. Although this diminishes useful available power, reductions are comparatively small but this is not the case for system strength power injection which can substantially
discharge batteries.

This is a vexed question and best not asked of those who already own a solar battery system.

There is no doubt that for the moment the choice of a battery is not so much driven by economics as it is for the sake of independence from the grid. Admittedly this can be an important consideration, for example, for country-based bread and breakfast, where power interruptions are frequent. Those installations are much like uninterruptible power supplies, installed to provide assurance of business continuity.

It is estimated that battery prices would have to be of the order of $300 to $500 per kilowatt-hour of storage capacity, to provide an  appropriate financial return. If money saving is the main objective of the exercise, then relying on the solar PV installation by day and attractive night rates is still the way to go. However, as night rates become higher—and that may well be a realistic expectation, the use of a
battery, based on current pricing, might provide payback periods of six to seven years.

The long-term outlook is less certain because of the grid transformations taking place and which may well see restrictions being placed on ‘behind the meter’ installations (with or without batteries) as safeguard for system strength.