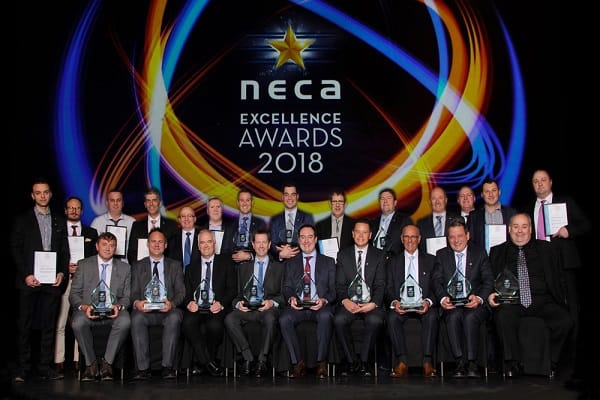 Innovation and excellence across the electrotechnology sector was recognised at the 30th anniversary of the NECA Victoria Excellence Awards held on 10 August.

“We received over 40 entries this year reflecting the diversity of the work our members undertake,” says chairman of the judging panel Peter Smith.

Argus Technologies, which is located in Mulgrave, Victoria, won the Domestic Residence category with its installation of a complex smart system for a brand new luxury residence in Mount Eliza. The installation included full electrical infrastructure, a home automation system, security and CCTV, whole of home video and audio systems and, the showpiece of the project, the design and installation of a fully automated home theatre.

“We strive to create a smarter living environment for all our clients,” says Argus Technologies general manager Robert Urpis.

“The Mount Eliza home’s electrical architecture and system programming has been designed and engineered in such a way it allows the home to grow with the owner’s changing needs into the future.”

Installing large, heavy light fittings on a 20m high pole on a windy day and ensuring that fresh produce looked appealing in the new lighting were challenges that Next Generation Electrical took on in their project to upgrade 3,350 light fittings at Melbourne Markets.

Since the project began in October 2018, the Melbourne Markets Authority has saved over 850 tonnes of greenhouse gases – that’s equal to driving a car almost 600,000km or planting over 12,000 trees.

“We worked extensively with the stallholders to ensure the lighting displayed their produce in a flattering way,” Next Generation Electrical chief executive Pete Summers says.

“Our proudest moment was delivering the project two weeks early with zero incidents on sit.”

Heidelberg West-based Nilsen (Vic) took out two awards this year; the first for its Austin Hospital high voltage and generation project where it upgraded the electrical systems and back-up generators.

“Working in the live environment of the Austin Hospital was a great responsibility, everything we did was geared towards ensuring the complex never lost electrical power because of our work,” says Nilsen (Vic) general manager Rob Selymesi.

Nilsen’s second win was for their work on the NEXTDC Tullamarine data centre installing highly sophisticated technology in a compressed time frame alongside the building works.

“In several of the categories, the excellence of the projects across all criteria made it very difficult to select a winner, with one point separating fist second and third in several categories,” says Peter.

Below are the 2018 NECA Victoria Excellence Award Winners:

Congratulations to all winners!

Sonnen has announced the launch of ecoLinx