Before we get into the details of biofuels, pause and consider that our planet is brimful with energy.

This would be the case even if the sun stopped shining and the wind died down.

The big challenge is to get at that vast pool. Fossil fuel is no problem – just dig it up, or drill holes. We have been doing that diligently for the past 200 years or so, and we effectively price fossil fuels on the basis of a rare, noble metal – gold (which backs major currencies).

The energy we use in digging up gold has no relationship to the energy available from our planet. We’ll have run out of gold well before we have drained the last megajoule from the earth’s pool of energy.

It’s pure brain power that helps us to access more and more of that energy. In some cases we are actually going back to the past, as in the case of burning animal dung.

The past leads to the future
Look at the picture of a London bus during World War II dragging a contraption behind it.

This was a ‘gas producer’ supplying fuel (methane and carbon monoxide) for the vehicle’s diesel engine. 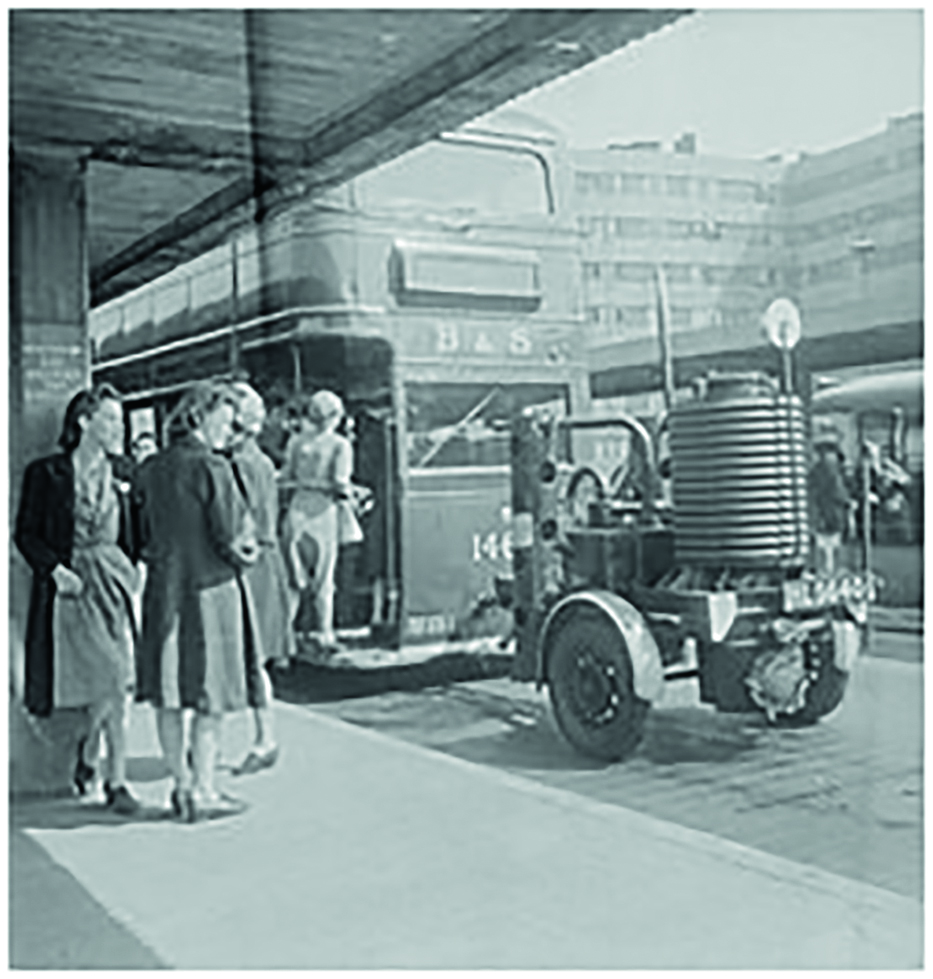 Coal was employed to provide gas to power the vehicle, because oil was being used for the engine of war that kept Britain free from enemy occupation.

In place of coal, we can utilise a plentiful supply of biological waste as biofuel (plus brain power) and voila – we’re in business.
The tabulation below covers only some biofuels and their energy values. Note: the ‘calorific’ values are expressed in megajoules (MJ) with 1MJ being equivalent to 278kWh. As is evident, many fuels approach the energy value of black coal, which is still considered a ‘gold’ standard in conservative circles.

Using biofuels, particularly dung, for electricity generation has become accepted practice in many underdeveloped countries. Even the UK and Germany use manure from their dairy and piggery industries, as well as other biofuels, to generate electricity.

Australia is a laggard in the extensive use of biofuels, because it has had a plentiful supply of cheap fossil fuel. It is only because of the pressure to limit greenhouse emissions that we are resorting to sunshine. The nation has mid-day intensities exceeding 1000W/m2 conversion to electricity.

It can be argued that cheap solar panels will negate the use of chemical conversion plant – and the messy, malodorous, anaerobic digesters that produce methane-rich gas.

Carbon-neutral fuels
Converting food stocks (eg: corn) into ethanol then burning it in internal combustion engines is a bad double whammy. Food supply is diminished and CO2 is released into the atmosphere.

Many biofuels and/or their precursors are carbon-neutral, because no energy is used in digging or drilling. 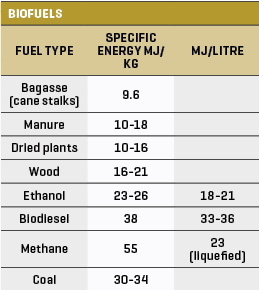 Also, using the energy in chemical reagents to provide fuel as the end product is carbon-neutral.

Carbon-neutral fuel used in conversion to mechanical energy in engines is a different matter. Diesel engines capable of running on methane-based gas as well as diesel oil are available. But they combust the fuel, therefore adding to the emission of CO2.

Internal combustion engines (ICE), including those in the wartime London bus engines, have provided mechanical energy in times of fossil fuel scarcity, but at the cost of adding to the atmospheric greenhouse gas load. Likewise, using ICEs to generate electricity is often just marginally better than using fossil fuel to do the job.

Experiments have been done on exhaust gas carbon capture. Another method, which is practicable, is to lower the carbon intensity of the process by raising efficiency through exhaust heat capture. Combined heating and power plant (CHP) is used in hospitals to provide electricity plus steam for laundries and autoclaves.

Energy conversion
The thrust towards lowering CO2 emission is putting pressure on commercial developments of ‘combustion’ engines, or CE (note the absence of the I for ignition).

These can be heat engines with high mechanical efficiency, such as the Stirling engine illustrated in Figure 2. This is only one of many mechanical designs – a linear version, for example, being deployed for electricity generation for satellite use.

The source of the heat is external to the engine. This form works on the basis of a working fluid (air) that expands through heat inflow in the top cylinder and is cooled then compressed as it is reintroduced into the top cylinder.

Similarly, a Rankine cycle turbine – using solar heat from a salt pan or hot exhaust gas from a diesel engine – employs a working fluid with a suitably low boiling point.

The more stages involved in producing a kilowatt/hour of electricity the lower the overall energy efficiency. The typical efficiency of heat engines, including ICE, CE, turbines, etc, is 30-40%. Direct conversion of fuel energy to electricity via fuel cells with conversion efficiency of 60% and higher is therefore attractive.

Biofuel cells based on bacterial substrates are still at an experimental stage, offering very low power densities in milliwatts per square centimetre and very low voltages.

Ethanol-based fuel cells, on the other hand, are suitable for tasks such as battery charging in electric vehicles, or for direct power supply. They have suitable power densities and typically have an individual cell voltage of 0.7V, making them suitable for stacking in series and in parallel.

Unlike batteries, they rely on a continuous supply of reagents (oxygen and ethanol).

Ethanol can be produced from biomass including sugar cane, corn, straw, etc, using fermentation. Ethanol-based fuel cells are beginning to be used in electric vehicles. They are also suitable for use with inverters.

Engines for generation
For many electricity projects, some form of gas engine drives the generators.

Some have become known by their brand name, such as the Jenbacher engines from Austria. 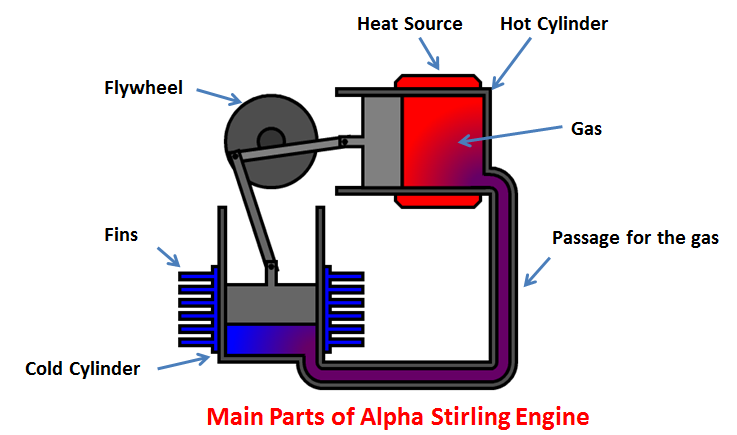 Gas engines can be operated from anaerobic digesters, from coal gas and landfill gases.

Anaerobic digester gas (digas) contains hydrogen sulphide, which is highly corrosive and must be removed, perhaps through caustic soda scrubbing.

One of the main property differences between digas and producer gas is the methane number, which is indicative of the tendency of the fuel to knock.

Diesel engines can be fuel-flexible and are even capable of running on vegetable oil.

Injected fuel is ignited because of the temperature rise during compression. Power is increased through the use of a turbo charger, pressurising the air intake. The turbo charger is often driven by a small turbine using engine exhaust gas.

In vegetable oil operation, the fuel is cleaned and heated in a fuel treatment system before injection into the engine. Filters and separators remove impurities and water.

Entrepreneurial enthusiasm?
As mentioned, Australia has not yet exploited the full advantage of biofuels.

Animal husbandry using grazing rather than feedlots makes manure as fuel impractical except for special cases such as in milking sheds and piggeries. For the former application, requiring strict hygiene, the collection process is likely to add considerable cost.

Biofuel production in Australia is at a very low level – 2% of petrol sales. Contraction in biofuel production is ascribed to lower prices for crude oil. This applies in particular to biodiesel due to the high cost of feedstock such as tallow.

An international event could cause a price surge, but that would need to be sustained to encourage more investment in production.
Biodiesel has important advantages, including a substantial reduction in hydrocarbon smog, sulphates and sulphides emissions (constituents of acid rain), and a 14% or more reduction in CO and CO2 emissions.

In the transport sector, ethanol as used in E10 (9-10% ethanol in unleaded petrol) is a step in the right direction. The ethanol is made by fermenting starch from flour milling and also from sorghum.

There is little incentive to develop second-generation biofuels made from non-food biomass such as plant material, manure and woody crops. The processes require new manufacturing capability to be developed on a commercial scale.

At the research level, algae as a source material shows some promise. After all, oil and gas fossil fuels are the result of algae millions of years ago. Research establishments, including the CSIRO, are looking into the possibilities of commercial scale production.

The big advantage of second-generation fuels is that there is no competition for feedstock.