It is more important than ever to support local industry and jobs by buying Australian-made electronics. Paul Skelton finds that Australians create some of the best merchandise in the world, so why aren’t we supporting it? 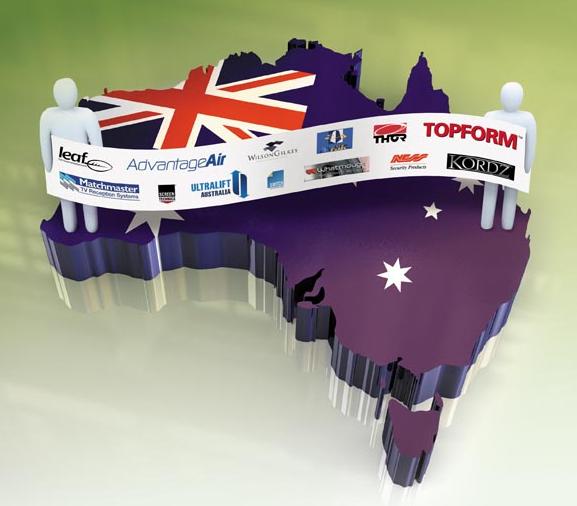 With the all the doom and gloom around the global economic crisis, supporting our manufacturing industry is crucial – and custom installers are in an ideal position to do so.

The ‘Australian Made, Australian Grown’ logo is the nation’s most widely used and best-known product symbol. It has 98% recognition domestically and international awareness is growing rapidly, according to the organisation behind it.

For more than 20 years, the Australian Made, Australian Grown Campaign has used the famous green and gold logo to help consumers exercise their buying preferences.

The logo is the centrepiece of a collective effort by business to promote Australian manufacturing and products to the world, and it enables businesses to capitalise on the associated consumer good will.

Research released by Roy Morgan late in 2006 clearly shows that Australian consumers want to buy Australian and that more than two-thirds do so whenever possible, or often.

But can you complete a high-end installation using only Australian-owned and locally made products?

Well, you would certainly come close.

From the big-ticket items, such as Switch Automation control and projection screens by Screen Technics, through to smaller but necessary components, such as surge protection from Thor Technologies and cables from Kordz, Australian manufacturers consistently create world-class AV products for the connected home market.

“Installers can expect any product made in Australia to be of an extremely high standard,” Thor Technologies director George Forster-Jones says.

“It’s not always about price – it’s more about quality, performance and reliability. Price is quickly forgotten when a problem occurs.

“At the end of the day it’s a very simple equation: if people choose to support an overseas product over a local one, eventually we will be totally reliant on imports. This means fewer jobs and opportunities for our children.”

Based in Western Australia, Thor conducts all research, development, engineering and testing of its power conditioning products locally.

George says this ensures that products are designed primarily for Australian conditions.

“It also means that by dealing direct with a manufacturer like us, if a special product is not available or a model needs to be slightly modified for a particular purpose, then we are well placed to cater for these requirements.”

Mark Vorstenbosch is Australia and New Zealand sales manager for Victorian manufacturer Leaf and is proud of his company’s Australian credentials.

Leaf is based in the Melbourne suburb of Braeside, and Mark says there is no intention of moving any part of the manufacturing process overseas.

“We’ve gone to great lengths to ensure we are completely Australian made. For example, we have an automated pick and place machine, which is something a lot of people outsource overseas. We print circuit boards, we load all the parts, every step is done here. People design the product and develop it in-house.

“In fact, a lot of the solutions we come up with stem from the relationship with our dealers, and we can produce solutions for market niches that haven’t been explored.

“We don’t see the point in making a product that is a readily available on the market, and we don’t want to go out and create another version of a Crestron or AMX control system. They’re great, but what we do exceptionally well is create backbone structures.

“Our speciality is AV, and distribution of such, and we can do the smaller jobs that large manufacturers don’t touch because they don’t see any value in doing so.”

Leaf, in stark contrast to many of its competitors, is budgeting for increased growth this financial year. Mark says it has attained about 50% each year for the past five.

But that’s not to say it’s all lollipops and rainbows for Australian manufacturers.

“People are largely desensitised to the fact that something has a ‘Made in China’ or ‘Made in India’ label on it,” he says.

“And sourcing local materials is probably a lot harder than it should be. Once upon a time you could do anything in this country with aluminium, but now – apart from raw aluminium – there’s not much left.”

“The Australian ethos is a fair day’s pay for a fair day’s work. However, we know that many people overseas have to accept work under what we would consider dismal and squalid conditions.

“This means things can be produced more cheaply because manufacturing costs are lower.

“We also know that maintaining quality and adding safety – such as flame-retardant qualities in plastic housings – generally goes against the philosophy of some overseas brands whose emphasis is on making as cheap a product as possible.

“Creating a product to a price point instead of a standard will present its own problems in the market.”

George says this emphasis on cheapness makes it a real challenge to stay competitive.

“Many of the obstacles that an Australian manufacturer deals with, such as the installation of circuit breakers, are there for a reason. Unfortunately, products that are made overseas are not covered by the same rules or regulations.

“In our case there are policies to ensure products meet electrical safety tests, but there is no law that states products need to meet a particular standard of compliance.”

Australian products must adhere to strict controls that have been put in place to protect the consumer.

“We choose to ensure that our products not only meet the electrical safety Standards but also the AS/NZS Standard. This doesn’t happen in overseas models.”

Robert admits to succumbing to temptation and trying out some cheaper imported products. However, he quickly realised this was of no use to his company.

“I’ve had a couple of samples from China of some of the shelves I make, but they were dreadful. I just couldn’t send them out to anybody – it would ruin my reputation.

“I’m not interested in competing with Target and Kmart; I’m trying to produce a high-quality product that arrives on time and is exactly what you ask for and pay for. If you buy a $250 plasma stand from Target, you can’t expect great quality.

“Although it’s absolutely tempting to import cheaper products, you just can’t trust them.

“If you buy a rack from me, I’m getting a local manufacturer to do some of the bits and keeping the jobs in Australia – plus, it’s better quality.”

Companies such as Robert’s are small, and if he stopped manufacturing here it probably would not mean job losses. But if every small operator shut up shop the result would be catastrophic.

“People have the choice to buy Australian made,” Mark says.

“They may not know it exists, but they don’t look very hard either.

“With our product in particular, it’s ludicrous that people don’t seek it out. They would receive so much more support on every level than they would from an internationally-based company.

“We are one of the last truly Australian manufacturers left. And, if need be, we will be the last. There is no point in moving our operations overseas.

“We need the ability to react quickly and respond on a smaller scale. There’s good reason to buy from an Australian manufacturer.”

George says he is proud to be Australian.

“My family, home and children’s future is in this country, so I support other local manufacturers wherever I can, even if it costs me a little bit more.

“If I don’t do this, we will become totally reliant on imported products and it will cost a hell of a lot more – not only in monetary terms but in opportunities for my children and their future.

“It is important that all major retailers support Australian manufacturers like us. First and foremost it gives customers a choice on the shelf and lets them make the decision as to which product to buy.”