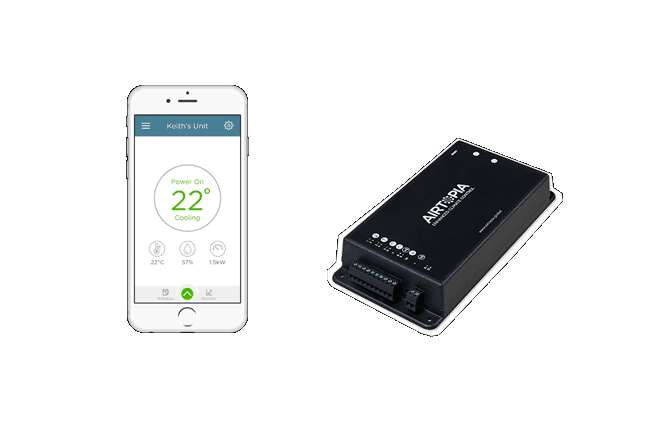 The key to climate control in the growing connected home market has been unlocked by Australian engineering company Airtopia, whose climate optimisation technology takes the complexity out of integrating the enhanced control of split-system air conditioners, both for commercial properties and private homes.

The technology is a heating, ventilation and air conditioning controller that integrates seamlessly with infrared (IR) controlled split systems, allowing you to control your heating and cooling remotely via your mobile phone.

The advanced technology uses a patent algorithm to identify IR signals from the air conditioners hand held remote and automatically loads the required protocol data from the Airtopia Cloud Service to the controller.

The Airtopia Controller can then communicate with the air conditioner in the same way as the original hand held remote and connects directly to the app without the need for any network configuration.

The idea behind the technology arose from the market itself. Before Airtopia was developed, integrators took it upon themselves to create ad hoc solutions for controlling spilt system air conditioners, often at very high costs and excessive programming hours.

A group of engineers got together and Airtopia was born out of a simple idea; if the learning process could be electronically automated and reduced to minutes of work rather than days, the market would welcome such a solution, and they were correct.

“Our earlier adaptors of the technology have embraced it and through forums, recommendations and word-of-mouth, have enabled our technology to reach 15 countries in less than six months since it’s launch,” said Airtopia’s managing director Dom Cannalonga.

“Our team started their research in October 2012 and we launched our first commercial version of the technology in May 2015, so it was almost a three year process.”

“The journey to perfecting the technology was not a quick one, and improvements will always continue to be made as technology advances, but the results we are seeing so far and the ability of the technology is outstanding.”

There have been other crowd funded and kick starter programs working to reach the same technology break through as Airtopia, and although they have been pushing their products heavily through marketing, none are yet to design a system as simple to install, easy to use and low cost as Airtopia.

Airtopia’s technology is just one more step towards the fully automated home of the future, that now, seems not so far away at all.