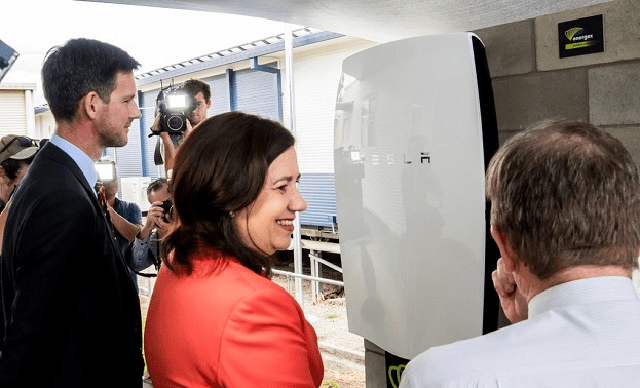 The premier said battery storage will be an important part of Queensland’s energy mix in the decades ahead, which meant training up the next generation of electricians for the jobs of the future.

“New technologies like solar battery storage will dominate the next phase of the solar energy industry, and with it a whole new opportunity for new jobs,” Premier Palaszczuk said.

“These new recruits will gain first-hand experience with the latest technology as part of their training here at Rocklea, which only cements Energex’s reputation as producing some of the world’s top electricians.

“The energy network will look very different 20 years from now than what it does today. Queensland is perfectly placed to take advantage and ensure we can make the most of those future job opportunities.”

The premier said the trial, using technology from leading solar companies like Tesla, would further cement Queensland’s reputation as a leader in the rooftop solar industry.

“The Government has a goal of one million rooftops, or 3,000 megawatts of solar PV capacity in Queensland by 2020, and the emergence of Battery Energy Storage Systems will play a key role in achieving that goal.

“My Government is continuing talks with global players in the solar technology industry and we look forward to working with them further into the future.”

The premier was joined by Energy Minister Mark Bailey, who said the trial’s three battery systems will provide Energex with real time data to better understand how best to integrate new technologies into the network.

“We have some of the best solar resources in the world and because of that reputation, each of these suppliers has earmarked Queensland as target markets for their products,” he said.

“The data obtained from these trials will assist in developing systems to manage new technologies, including battery systems, and provide cost-effective outcomes for Queenslanders.”

Energex chief executive Terry Effeney said the trial was part of a long-term strategy to manage demand on the network based on customers’ ever-changing consumption habits.

“The way our customers consume electricity has changed significantly with the emergence of solar PV and battery technology and we have changed with them,” Terry said.

“The future of energy usage in Queensland is about choice; providing customers with a choice as to how they consume their electricity and how much they rely on the network.

“Installing batteries at our own EsiTrain facility shows a genuine commitment from Energex to a future in which renewable energy will be integrated into South East Queensland’s network.

“It means we can record real time data from the system and observe the usage habits, which is similar to the smart technology processes we currently use for air conditioners and hot water systems.”