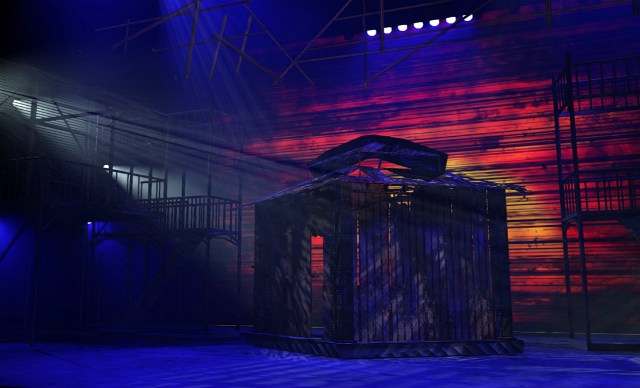 In a world first, pre-visualisation software has been used for a Big West End production: Miss Saigon at the Prince Edward Theatre. Award-winning lighting designer Bruno Poet employed CAST’s wysiwyg software to preview what the epic stage lighting for the upcoming product would look like.

“As the script and score for the show were well established, the production period for the show was much shorter than other West End productions of a similar scale. Our team worked from scratch on the show’s lighting design using the pre-visualisation features on offer in wysiwyg,” explained Poet.

“CAST designed wysiwyg specifically to help ground-breaking lighting designers such as Bruno Poet,” says Igor Silva, marketing director at CAST Software. “And anybody that’s been blown away by Cameron Mackintosh’s latest epic production of Miss Saigon in London will already see that the results speak for themselves.”

CAST’s wysiwyg enables lighting designers to layout their stage structure and have their lighting show pre-programmed before they even arrive at the venue. It is this particular feature that helped Bruno Poet to start the important work of the lighting design for Miss Saigon before even stepping foot into the new venue at the Prince Edward Theatre.

“Whether a stage director, set or lighting designer is creating an entirely new lighting design for any scale of production or event, or wanting to update and develop a current design, the wysiwyg design and pre-visualisation suite gives them a real edge, as well as cutting electricity and production costs and the time they need onsite” adds Silva.

“As Bruno Poet’s experience on Miss Saigon proves once more, CAST’s products are the industry standard for lighting design, programming and previsualisation.”

Set and lighting built and visualised virtually in wysiwyg

The latest set and lighting designs for the new production of Miss Saigon were initially built using wysiwyg, by lighting visualiser, James Simpson, with on-site support during pre-plotting by programmer, Warren Letton. Simpson’s brief was to re-build the scenery and add new set elements where necessary, in order to also create and patch the entire lighting rig.

“The reason visualisation was such a success on this production was because Bruno had the confidence to push it through the producers and get them to support it,” Simpson recalls. “Visualisation doesn’t have a future in the theatre unless lighting designers, programmers and producers want to support it, but if they do it can really save a lot of time and money.”

Bruno Poet successfully convinced Jerry Donaldson, production manager for Cameron Mackintosh, to use wysiwyg. Simpson notes this work, “paid off, as not only did the production manager commit to the idea, they sung its praises afterwards and talk of that moment the realisation came when they understood how this is going to benefit their production.”

“I sincerely hope that many more big productions take on what Miss Saigon learned from doing pre-vis and invest in it, because with more people using it we will have better productions and our industry – which is finding its profit margins harder to reach than ever before – gets a boost.”

Simpson used wysiwyg as an essential lighting tool for previsualising the set and lighting on Miss Saigon. CAST’s software enabled Bruno Poet to save that all-important plotting time on stage.

“Bruno wanted to hit the ground running when he got into the venue and have some building block cues and chases already programmed so he had something to show the director and producer on the first day,” Simpson recalls. “They started by creating focus positions for all of the lights so there were pallets built on the Eos Ti lighting control desk. This in itself was a useful exercise as it allowed Bruno the chance to establish what lights could make the shots and make design changes before the rig had even gone up.“At this point in the process Bruno was still in rehearsals at Three Mills so the visualiser was set up in a nearby room so he could jump in and out of rehearsal and ask Warren to try out an idea he had just had and pop back to rehearsal with the confidence of knowing his ideas were working.

“Meanwhile, Warren was also making great use of wysiwyg, as it enabled him to set up his desk prior to the ‘get in’ happening for the show. Normally he would be in the venue checking things as they came in, but with the visualiser at his disposal he could do all of this work offline, so he was ready to get stuck into the real work with Bruno the first day they turned up at the venue.”

Time spent on perfecting the show and not sweating the small stuff!

Using wysiwyg enabled Bruno and Warren to put in a rough cue stack and load some basic looks into them so there was a working framework for them when they first got into the venue.

The important pre-visualisation work using wysiwyg meant that Bruno and Warren could perfect the big numbers in the show.

“They spent a lot of time working on certain well-known musical numbers like ‘The Heat Is On In Saigon’ and ‘American Dream’,” says Simpson, “which had fast paced cueing and took a lot of effort getting timings to work with the music.

“All of this was taken into the venue and although the design morphs and changes throughout the process, the results seen by audiences today have a lot of that pre-visualised work in it.”

Bruno’s lighting rig was crammed full of moving fixtures to give him the flexibility he demanded for this project and one of the most notable uses of new technology was the use of LED with the Martin MAC Aura for strong backlight and creating epic colour washes.

“This decision paid off dividends for him as it suited the look he was trying to get for the show,” says Simpson. “The first time he felt sure that this bold move was going to work was when he saw them in wysiwyg; the bold colours and wide zoom looked epic! And he couldn’t wait to see them in real life to see if they could produce the same dramatic looks – which they did.”

Bruno also specified MAC Viper Performances, which did the majority of the lighting work for specials and keying, as well as ETC Revolutions to give tungsten where it was needed.

An evenly spaced LED wall using Martin Professional EvenLED™ technology was used for the cyclorama in the show and at the time the wysiwyg work was being carried out this was controlled by Warren and the lighting team.

“It was very impressive to see all of this working on wysiwyg,” adds Simpson. “Being able to play with transparencies on the sunset cycs in front of it meant we could match it very closely to how it was supposed to look in real life. We had great fun making sunsets and night-time scenes – and, yes, a psychedelic rainbow chase just for us!”

CAST helps producers save time, money and finesse their shows

Ultimately, the use of wysiwyg to pre-program the event, h[gallery_images_placeholder]elped Bruno Poet to save the production time, money and to allow the producer and director more time to rehearse and finesse Miss Saigon.

“Bruno tells us that he was able to turn up at the venue with three days of vital plotting already done,” says CAST’s Igor Silva, “on top of the massive savings made in terms of time and money, perhaps the more important benefit is the fact that our software gave Bruno complete peace of mind and full confidence in his rig, allowing him to take control of his lighting sessions in the venue very early on.”

The bottom line is the fact that using wysiwyg meant that the rest of the production had more quality time on stage to do more rehearsing and finessing. Any director or producer knows that this time is invaluable – so the pre-visualisation and lighting design work is there in every aspect of this amazing show.

Get Switched on and Be Safe Outdoors ...