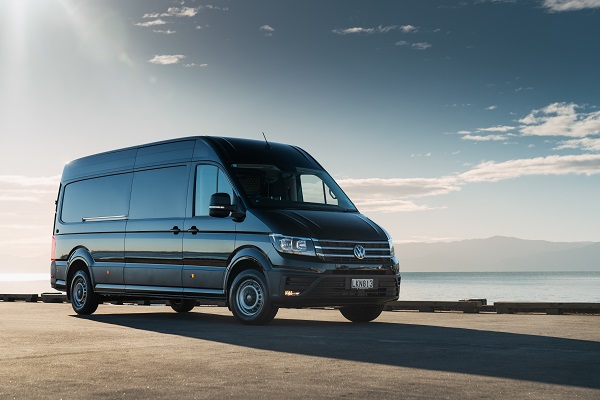 Volkswagen has launched its second-generation Crafter in Australia with a host of mechanical highlights and new advanced safety technology available across the large van and cab chassis range.

Whereas the first model was based on the Mercedes-Benz Sprinter and, at the end of its lifecycle, was offered with just a single transmission (six-speed manual) driving the rear wheels only, the fully redesigned in-house-developed new Crafter has emerged with a broader range that includes an eight-speed automatic transmission option and front- and all-wheel drive variants.

As before, Crafter vans come with three lengths (medium wheelbase/5986mm, long wheelbase/6836mm and LWB with overhang/7391mm) and three roof heights (standard, high and super-high). Cab chassis models are available in three-seater single and seven-seater dual cab body styles with either a medium (6204mm) or long wheelbase (7004mm). There are 59 variants in total!

The single TDI340 produces 103kW of power and, as the model name indicates, 340Nm of torque, while the bi-turbo TDI410 has a more muscular 130kW and 410Nm. Both engine variants produce maximum pulling power at 2000rpm.

The TDI340 single turbo is paired with either the six-speed manual or an eight-speed automatic with the front-wheel drivetrain – note that the manual is restricted to tradie-targeted ‘Runner’ vans – while the higher-output TDI410 is used across a broad spread of manual/auto FWD, AWD and RWD variants, the latter split between single and twin rear tyre format.

At launch, only the TDI340 ‘Runner’ variants and TDI410 front-drivers had come onstream, with a progressive rollout occurring for other configurations across AWD, TDI340 autos and RWD. The entire range should be available by early 2019.

VW says the new generation brings with it a wide variety of benefits, from improved payload and cargo capacity to the latest in driver assistance technology.

Gross vehicle mass (GVM) ranges from 2550kg to 4490kg, while payload starts at 1115kg and, depending to the variant, climbs as high as 2392kg. Maximum braked towing capacity is 2500kg, although some variants were still to be rated at the time of writing.

The cavernous front-drive vans offer a cargo capacity of up to 18.4 cubic metres and a load compartment height of up to 1961mm, while load length runs as long as 4855mm and width between the wheel arches spans 1380mm on most variants. Dual-tyre models are slightly narrower.

VW claims the new Crafter sets new standards for driver assistance and comfort systems in the large van segment, pointing to the introduction of an electromechanical steering system that, in replacing the previous hydraulic power steering set-up, not only helps with manoeuvrability and fuel economy but also enables a new suite of active safety features to be offered.

These include active lane keep assist, park assist and rear traffic alert systems, on top of other driver-assist tech such as adaptive cruise control, driver fatigue detection, front assist with city emergency braking, a multi-collision brake system, crosswind assist system, blind-spot monitoring, and more. Not all of these are fitted standard.

Front, side and curtain airbags are fitted to most variants (super-high roof vans are the exception to the rule on side/curtain protection), while other notable safety features include a reversing camera on all closed-bodied models, front and rear parking distance monitor, and a side protection sensor-based system.

The cabin also features a vast array of storage compartments, power sockets and, right from the base level, the driver’s seat has a broad range of adjustment including height and electric four-way adjustable lumbar support. Front ‘ErgoActive’ suspension seats with electric massaging function are also available as an option.

Even with the switch to an all-new platform, VW says the Crafter remains compatible with existing cabinet systems from leased vehicles or previous models. The company has also developed a wide range of fit-out and body conversion options catering for the various trades.