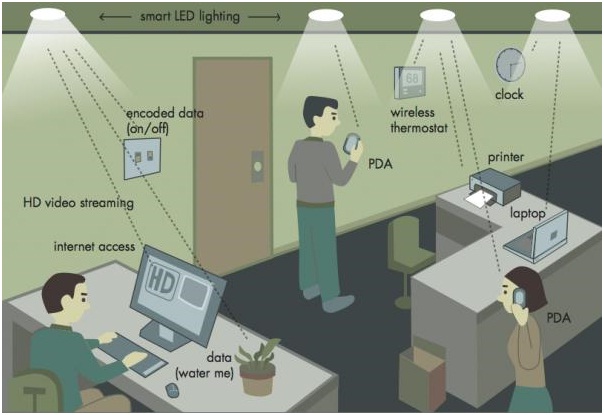 Driving this research forward is the ever-increasing demand for bandwidth and flexibility in gigabit home networks, which will be needed for future Internet services. This demand will further grow as the roll-out of the National Broadband Network (NBN) hits its peak and services such as high-definition TV and telemedicine applications become increasingly popular.

Siemens researchers recently improved on their own record for wireless data transfer using white LED light, in collaboration with the Heinrich Hertz Institute in Berlin, achieving a data transfer rate of up to 500Mbps, significantly bettering the previous record of 200Mbps.

“VLC is not ‘better’ than radio waves per se, actually it’s rather worse, but it offers some interesting properties, such as the use of an unlicensed and unregulated spectrum,” he says.

“Light is easily contained, which results in secure communication even without encryption and the same modulation bandwidth can be used in adjacent areas. It also offers high data rates at rather low emitting power when the light is bundled into a beam of low divergence.”

He also lists the intuitive alignment of sender and receiver, the dual use of already existing infrastructure, visualisation of the data link and potentially higher acceptance by the public than RF technologies as key selling points of the technology.

In a situation like this, visible light, as a currently unused and license-free medium, offers a suitable alternative. A further advantage is that this form of data transfer is impervious to interception. Only the photodetector that is positioned directly within the light cone is able receive the data. In other words, it is impossible to ‘tap’ the data transported in the light beam.

There is also a need for this type of data transfer in factory and medical environments, where in certain areas radio-borne transmission is either impossible or only a limited option. A further application is in the field of transportation, where LED stoplights or railroad signals could be used to transmit information to cars or trains.

Engineers at Pennsylvania State University (Penn State), have also been researching the benefits of VLC and believe that light is better than radio waves when it comes to some wireless communications. Optical communications systems could provide faster, more secure communications with wider bandwidth and would be suitable for restricted areas like hospitals, aircraft and factories.

For Joachim, when it comes to commercialisation most of the groundwork has been done (R&D, prototyping, and standardisation) and quite a handful of companies have looked into including the technology in their business plans.

“But predictions are hard, particularly when they concern the future.”

Assessing the viability of a project