Up ya date, mate! 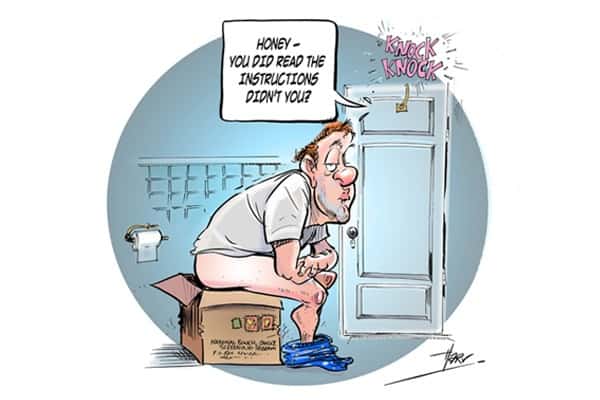 There has finally been a consensus among the medical fraternity about what to do when it comes to screening for prostate cancer as well as an expansion of the successful bowel cancer screening program.

Firstly, I’d like to say a few words about screening in general. Screening refers to doing a test on a large number of individuals in order to pick up a disease at an early stage so that treatment can be instituted early, thus saving a premature death.

The cost of screening will be offset by the savings in monetary terms from the reduced medical treatment costs of an advanced disease as well as the savings from preventing lost productivity from a preventable, premature death.

There also needs to be evidence to prove that finding the disease early will in fact prevent a premature death, balanced against a false positive rate where investigations and the stress of a possible serious disease such as cancer, eventually proving negative in some individuals, will cause unnecessary treatment, stress and anxiety.

This has been the problem with prostate cancer screening in the past.

There is still no government backed screening program for prostate cancer recommended for all men but at least there are now useful guidelines to direct GPs toward who and when PSA testing should be done. Bowel cancer screening with the Faecal Occult Blood Test (FOBT) or affectionately known as the ‘poo test’ has always been a well-respected test among medicos and there is no doubt that when it comes to bowel cancer, early detection saves lives.

Let us look at what is new with respect to prostate cancer. Over 20,000 Australian men are diagnosed with the disease every year. About 3400 men passed away because of it last year. It is the second commonest cancer behind skin cancer and it is estimated that by 2020 there will be some 200,000 men living with it.
Fortunately the survival rate has improved over the years and it is now about a 95% five year survival rate. It is unclear whether this is due to better treatments or because it is being found earlier.

There has always been controversy over screening for prostate cancer with some recommending universal screening with the PSA test and digital rectal examination (DRE) versus those who have been totally against widespread screening, stating that the cure may be worse than the disease due to the side effects of treatment and a lot will die with the disease, but not because of it.

As with most controversial issues in life, the answer generally lies somewhere in between. GPs are at the forefront of this and up until now we have had to each develop our own protocol when dealing with this important male disease as no formal guidelines existed. As many men die of prostate cancer as women do of breast cancer; however breast cancer has well delineated investigation and treatment guidelines.

In January this year, a multidisciplinary team brought together by the Prostate Cancer Foundation of Australia, in partnership with the Cancer Council of Australia, presented a set of guidelines to assist healthcare professionals and their patients make a considered decision about testing and managing prostate cancer.

I have had to develop my own protocol over the years and I was pleased that the new guidelines fairly closely resembled my own, with a few differences in opinion here and there. They are only guidelines and give direction but they don’t have to be followed to the letter as sometimes unique situations arise and different decisions made in the interests and desires of the patient.

From my perspective, it won’t be the end of that test for me as there are instances that it will be required in certain circumstances such as the follow up of abnormal PSA blood test levels or when there is evidence of the prostate gland blocking up the water works. I think the DRE may have scared quite a few blokes away from getting a general check-up and I hope a big plus about this announcement is that more blokes now turn up for the necessary check-up.
Men’s health is not just prostate health after all.

The benefits and the possible harms of the PSA test should be discussed. When should PSA blood testing commence and how frequently should it be done? Prostate cancer is largely an age related disease and hence the risk increases as you get older. As part of a general check-up in someone without a family history of prostate cancer, it is now recommended that PSA testing commences at age 50 and then every two years until the age of 69. From 70 it can be continued or ceased after the pros and cons of testing are discussed as by this age the treatments may be worse than the disease. This is because if prostate cancer develops after 70 it may take a further 7 to 10 years to bump you off.

MY THOUGHTS AND WHAT I DO
Overall I am happy that there is at least a framework for GPs and patients to work on rather than a blanket yes or no. But I have a few misgivings. Prostate cancer unfortunately does occur before 50 and the consequences can be tragic. I believe that PSA screening for those with a family history should commence at 40. Trying to work out who and how many in the family have had or even been checked for prostate cancer can be very difficult and unreliable.

Your father may have had prostate cancer but was never checked and I wouldn’t have a clue if my other brothers have been checked. In the instance of my late brother Peter Crimmins, he died at 28 years of age, and so I don’t know if he may have developed prostate cancer if he lived a full life.

What if you were adopted? I think keep it simple. GP land needs to be simple. Start at 40 when there is a family history or you don’t know your family history. I also think that yearly is preferable over biannually. The latter probably saves a few health dollars but I think young male lives are more important.

If there is no family history of prostate cancer then I am happy for it to start at 50 but I also like to have a baseline reading or two from the 40s as a comparison. This may also pick up the isolated cancers that crop out of the blue. Yearly or two yearly testing? At 50 the normal range of PSA is less than three. If the patient’s level is normal but between 2-3 then I like to keep a closer eye on them and recommend yearly tests. Every two years is OK if their level is under one and 1 to 2 is a grey zone for me. I reckon I lean more to yearly testing.

Seventy is the new 60 so I don’t think that surveillance should stop then. But what to do about prostate cancer after 70 years of age needs a lot of looking into with your GP, urologist and oncologist. With respect to the PSA velocity testing, I must say that I am a big fan and have found it very useful along with the Free to Total PSA level. The latter is a bit like the good versus the bad cholesterol test.

BOWEL CANCER SCREENING
Bowel cancer screening has been around since 2007 when a kit was sent out to all Australians who had turned 55 or 65 years of age. There are around 15,000 new cases of bowel cancer diagnosed in Australia every year and the numbers seem to be increasing. Of that 15,000, about 8500 are males so there is a higher incidence in us. Over 2000 blokes die of the disease every year but if found early, it is certainly curable.

Family history is an important risk factor as well as lifestyle prevention with measures such as an increased dietary fibre intake and smoking cessation. Bowel cancers generally arise from stalks of tissue inside your bowel called polyps which protrude into the lumen of the bowel. It is important to know if you have any of these inside your bowel as they may be pre-cancerous. The best way is to directly look inside your bowel with a long tube and camera on the end in a procedure called a colonoscopy. If there is a family history of bowel cancer then a colonoscopy should be done sometime soon after 40 as a baseline and then based on what is found the person doing the colonoscopy will generally organise a recall.

Some with a very strong family history may even need it earlier as it should be done about 10 years back from when the close relative developed it. It would be impractical and costly to do this test on the whole population so a very good screening test has been devised. If there is no family history then there is the National Bowel Cancer Screening Program or ‘poo test’ which has been expanded and now commences when you turn 50 and will continue until you are 74. Between these ages it will be further expanded over the next 4 years so that by 2020 you will get a kit every 2 years.

A positive test warrants further investigation and a colonoscopy is generally the test of choice. If polyps are found they are removed which lessens your risk of developing cancer from them. The pathology report on them also determines when you should have another colonoscopy. Sometimes nothing is found. It is important to note that the test is only a screening test and a negative ‘poo test’ doesn’t completely rule out bowel cancer or polyps so if symptoms such as excessive tiredness, abdominal pain, constipation and unexplained weight loss persist, see your GP asap.

The ‘poo test’ is a good one to do. As someone wisely said, it is probably the only way you are going to have the pleasure of sending shit back to the government! But it is only a good test if you actually do it. Unfortunately the take up is disappointingly poor, particularly in blokes. A bit over 30% of blokes do the test. There are still 60% of early bowel cancers missed.

Come on fellers, we can do better than that. It is simple to do. Before you put it away in the too hard basket, open it up and read the instructions. There must be cupboards or fridges full of these kits. I know most blokes aren’t good at reading the instructions but these are really simple. Basically put the floating mat in the toilet. Enjoy a good poo, perhaps while reading a chapter of one of my books and then pierce the “Richard the Third” with the plastic stick provided and put it into the labelled container. Put that in the fridge overnight and warn the family about it in case they think it is a tooth pick and repeat the deed the next day. Mail it off in the postage pack provided and Bob’s your uncle.

It takes a few weeks for the result to come back. You will receive a letter saying whether it was positive or negative and a copy will have gone to your GP if you have nominated him or her to receive a copy. If it is positive then see your GP but don’t panic or be scared to follow up.

That is prostate and bowel cancer screening in a nutshell. I think we as blokes can do it a bit better. The challenge is there for you all to increase the screening of these two important diseases and I am sure you can. Remember the words of Hawthorn’s famous coach John Kennedy… Do!

Solarwatt and Fronius to enter partnership