Transforming the grid with pole-mounted batteries 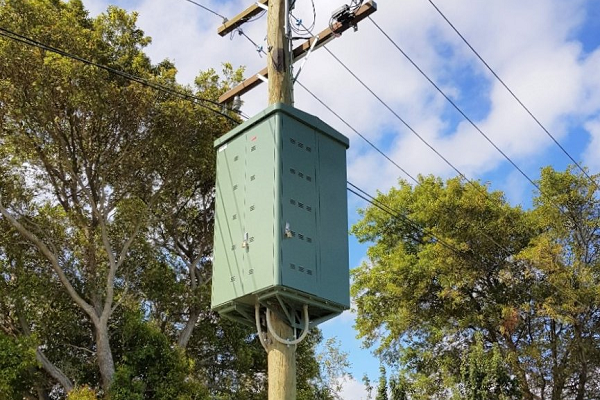 The Australian Renewable Energy Agency (ARENA) has today announced $4 million of ARENA funding to United Energy to trial the use of pole-mounted batteries to support more rooftop solar and manage peak demand across the low voltage distribution network in South Eastern Melbourne and the Mornington Peninsula.

The first of its kind in Australia, the $10.98 million project will see 40 custom-built batteries manufactured and mounted to electricity poles across United Energy’s distribution network. The batteries will operate as a virtual power plant (VPP), providing demand management services, and increasing hosting capacity for rooftop solar.

Each of the 30kW batteries will be capable of providing at least two hours of storage and will be installed at strategic locations across the network. The batteries will be manufactured locally by Thycon in Melbourne’s north and mirror the design of existing distribution transformers that are already mounted to poles across United Energy’s network in Melbourne’s bayside area.

In addition to reducing stress on distribution transformers in times of peak demand, the batteries will also be able to regulate voltage and increase the hosting capacity of solar PV in the local grid, providing benefits to all customers.

United Energy has signed a deal with Simply Energy for the market trading rights of the VPP. When the batteries are not required by United Energy, Simply Energy will operate them to provide wholesale power and frequency control ancillary services (FCAS). This is an example of how networks and retailers can share value streams to provide benefits to customers and the wider energy system.

The project follows a successful pilot by United Energy that saw two battery units installed in early 2020 in the Melbourne suburbs of Black Rock and Highett to demonstrate the feasibility of pole-mounted technology.

ARENA chief executive Darren Miller says the project was an exciting opportunity that builds on ARENA’s previous work to integrate renewables into the electricity system including VPP trials with Tesla, AGL and Simply Energy: “As more and more renewable generation comes online, it’s crucial to address the challenges of a changing energy mix and build the grid of the future.

“We’re excited to see United Energy trial a novel approach to battery storage that provides benefits to current and future solar customers and reduces network costs, while also increasing the level of dispatchable generation in the power system.

“United Energy’s world-first pole-mounted technology could change the way renewables are integrated into the system. When connected near customers, distribution connected batteries have enormous potential to facilitate higher levels of rooftop solar while keeping costs under control for all customers.”

ARENA’s funding for United Energy follows ARENA having commissioned AECOM in 2019 to develop the Grid vs Garage report which found batteries connected to the distribution network could provide additional value to customers and networks by reducing the need for infrastructure upgrades.