The rise of the microinverter 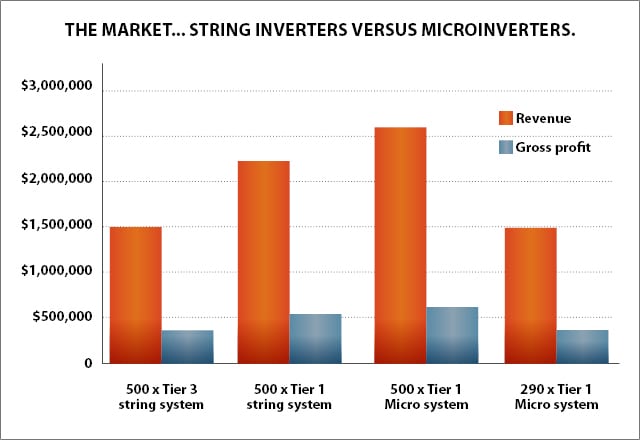 Someone asked me a great question recently: “Nige, I know you’re a fan of microinverters. How big do you really think their share of the market will be?”

It’s a great question because those of us who have been around for a while have seen plenty of excellent products never really take off because they don’t have the engineering, sales and marketing mix right. The most fabulously engineered product will fail to sell if it’s marketed poorly. The cheapest product will fail to gain sales momentum if it isn’t supported or fails the test of time. A great all round product offer will fail if the timing or feature set isn’t what the market wants.

Microinverters aren’t miracle devices, but I have sense that the sales success they are achieving around some parts of the world is because some manufacturers have landed on the right mix and that’s where it starts to get exciting. I would argue that Australia has a unique set of circumstances and that the recent growth in micro inverter sales is proof that the mix is particularly right for our market.

“They’re too expensive,” I hear you say. “Australia is a price driven market”.

Really? I wrote a story about market prices recently, diving into this issue and I think that “big fat worm” of low price has turned. Sure, there will always be a market for the cheapest gear and you have to be competitive but there are several major reasons why I believe lowest cost models will continue to lose market share. Firstly because consumers are learning that to a large degree you get what you pay for. The data shows that Tier 1 inverters and Tier 1 modules are gaining share rapidly, despite the price premium. Secondly, consumers are also increasingly aware that if you don’t buy from a reputable company who is making a profit you are unlikely to get support when it matters. I’ve personally spoken to crying customers who ring me for help when things go wrong. They are busy telling their friends how wonderful solar is and why they should learn from their mistakes and not buy the cheapest systems they can find. Thirdly, price data from several sources shows that despite the super low advertised prices, a large majority actually buy systems at a higher price than we often see promoted.

So, the data suggests that more people are willing to pay a premium if they can be convinced that there is real value in it.

This in itself tells us there is an increasing opportunity for companies to sell systems with microinverters. But more importantly, when you crunch the numbers and compare apples to apples, the gap between microinverters and string inverters is not as big as it first appears. In fact, one installer I spoke to today quoted me his numbers and demonstrated that from where he sits, micro inverter systems are cheaper when you factor in warranty periods, ease of design, speed of installation and the simplicity of ordering and stock holding.

Even of this isn’t the case in every situation, it certainly demonstrates that taking a second look at the real gap is probably worthwhile.

The second element of this equation is solar retailers (that would mostly be you).

What many solar retailers also tell me that they need to increase sales and/or, to cut costs. At the beginning of last year you could sell at perhaps $2.10/W net and today you have to sell at around $1.60/W net. That’s a drop of almost 25% in revenue and margin dollars for the exact same work load. It’s a hamster wheel that you have to get off.

Operational efficiency is one way to help cut costs that our industry simply has to tackle head on. Finding ways to get the same outcomes with less effort is crucial; be it in design, purchasing, advertising, lead costs or conversion ratio’s. This is where microinverters can really help.

Need an easier design process for your relatively unskilled sales people? Would you really like to optimise the output of every single system through product matching but can’t afford the time? Microinverters make it about as simple as it can be, with their Lego-like configuration models and intrinsic performance optimisation.

Sick of carrying a range of inverters to suit your ever widening range of system sizes? Ever been caught with old inverter stock that didn’t suit the markets needs and had to sell it below cost to clear it? Problem solved with microinverters. One model, perhaps two at most and you have a range for almost every application.

Buying too many sales leads which have shaded roofs? Seeing increasing numbers of roofs that have multiple orientations? Worried that your commission incentivised sales gun might be overlooking minor shading? That’s dead money and a recipe for disappointment. Microinverters will help.

The other way is to increase price. Few can get away with simply ratcheting price up without adding value, so tuning into what customers really want and developing offers loaded with benefits is essential.

Although we highlighted earlier that microinverters are much closer to the price of existing systems than was previously the case, let’s assume there is a gap for a moment. I ran a quick model comparing three 3kw system types.

Let’s assume you sell 500 x 3kW systems a year at 25% Gross Margin and compare the results. What you can see pretty quickly is that (logically) if you sell higher priced systems you’ll make more revenue and margin dollars. But more importantly, you can also see that if you sold almost 40% LESS micro inverter systems at that higher price, you would make the same revenue and gross profit as you would sell 500 crappy systems. For a whole lot less effort. And you would generate more energy for your customers.

In a nutshell I think microinverters provide a really compelling business case for clever solar retailers in a declining market, full of crappy products.

In our next feature on micro’s I’ll focus on some of the other reasons we believe that microinverters could really challenge the market share of string inverters.