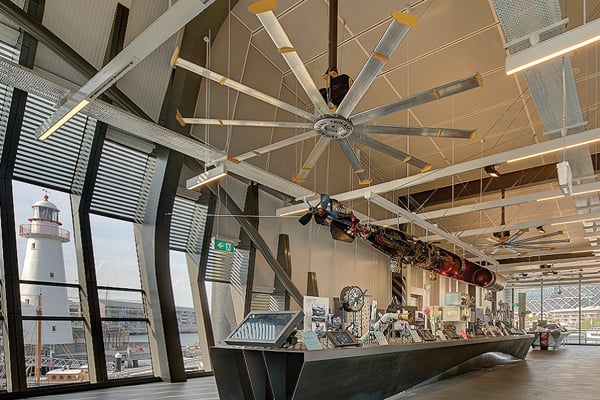 An extensive electrical upgrade to the Maritime Museum enlisted precision planning skills from one NSW contractor.

Located in the bustling Sydney suburb of Darling Harbour, nestled between the ex-Navy destroyer HMAS Vampire, submarine HMAS Onslow and patrol boat HMAS Advance, the Australian National Maritime Museum Warships Pavilion serves as a reminder of the great sacrifice made by the men and women of the Royal Australian Navy (RAN).

Recently, to mark the centenary of World War I and to commemorate 100 years of Naval service, the Warships Pavilion underwent an extensive electrical upgrade that would see the company responsible, Kerfoot, overcome the challenges of working in an unpredictable environment.

Kerfoot was contracted to design, supply and install all electrical services to the new pavilion, including the integration of the new system with the warship and submarine’s existing systems.

This included the supply of a new 400A main switchboard and power distribution system; step down transformers to convert AC power for the submarine; general power to the pavilion, including corrosion-proof under-wharf reticulation and marine-grade submains; complex architectural lighting; a Cat 6A structured cabling system; a fire detection and electrical wiring interconnect system (EWIS) integrated with the existing vessels’ systems; and, a lightning protection system.

Project manager Josh Kerfoot says the new pavilion will ensure the stories and experiences of RAN servicemen and women will be remembered and shared with future generations.

“We are well aware of the significance that this building holds within the community. Over half a million people, including 50,000 school children, visit the pavilion each year to learn about the role of the RAN during and following World War I,” he says.

“The pavilion has become a permanent tribute to the men and women of the RAN.”

The project itself was rife with challenges, Josh says, including the necessity of having a team working under the wharf; planning around the tidal conditions of the harbour; working between the wharf and the vessels to connect services; extending fibre optic cabling and mains cabling under the wharf; using boats to complete installations; and, installing lightning conductors in the water.

“When electing which of our team members would work on this project, we had to be certain of their abilities and commitment to the project because many of the installation components were considered ‘high risk’. Suppliers were also heavily scrutinised as any delay in the supply of material could prove detrimental to the completion of the project.

“Safety was the main focus for the Kerfoot team. Condition monitoring and knowledge of the tides was required for all works under the wharf and on the water while integration with the vessels took place.

“The Kerfoot team had to plan months in advance with the vessel crew to complete disconnects, alterations and reconnects to the vessel services.”

Working from boats to install large submains, lightning conductors and under-wharf reticulation also required careful planning and management as some of the tidal conditions only allowed work to be completed under the wharf for a maximum of four hours a day.

“Further, Kerfoot was not the only trade to carry out works under the wharf and therefore coordination between trades was a necessity.

“The busy nature of the harbour also posed a challenge as passing ferries and boats could cause large waves. To manage and overcome this challenge works were booked weeks in advance and planned with great precision.”

Due to the inherent difficulties of working on and near the water, the Kerfoot team undertook CPR and lifesaving training to ensure all team members were aware of the risks involved with the situation and how to respond to an emergency.

“Large sections of the works were completed using boats and special working platforms elevated over the harbour; but, the project was delivered on time, with no safety incidents and minimal disruption to the visitors and client.”

Technically speaking, given that the vessels were not a permanent fixture of the museum, disconnection from the pavilion needed to be a simple process for staff, Josh says.

“These boxes were designed to be concealed in the ceiling void located just under the gangways on the vessels.”

The brief also called for the installation of a lightning protection system to protect the building’s delicate facade. Kerfoot worked with the architect to conceal all lighting protection components while maintaining compliance with Australian Standards.

“Stainless steel hand railings and small fins connected to the building were used as lightning conductors, to minimise the visible components. The footings were also part of this system, which let us hide the conductors below the deck of the existing wharf. This made the installation almost invisible.”

Another important aspect of the project was to ensure that all works undertaken on the water had no impact on the environment. This posed a challenge when drilling and cutting into the wharf as all dust and debris had to be contained.

As a result, Kerfoot worked closely with the Environment Protection Agency (EPA).

“On completion of the project the EPA signed off on all works, meaning that we had had no effect on the environment,” Josh says.

In September, Kerfoot won the Commercial – Small Project category at the 2016 NECA NSW Excellence Awards for its work at the pavilion.

“For Kerfoot to be recognised as a winner not only reflects the high standard of work our dedicated team can produce, it also confirms our position as a top electrical contracting and management company within the industry,” Josh says.

“This shows our ability to adapt to any of our client’s requirements, overcoming environmental boundaries, however difficult they may be.”