Photoluminescent (PL) exit signage… where are we at? 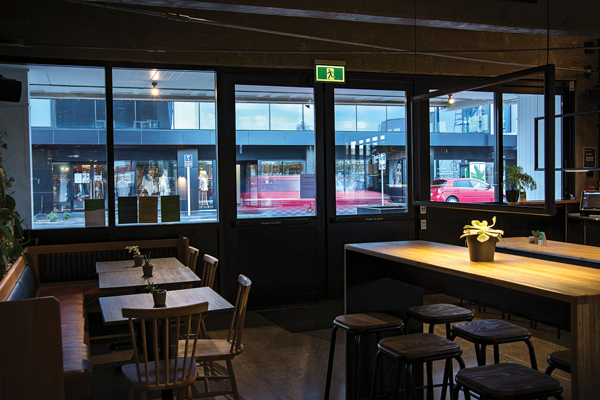 Lighting Council Australia (LCA) has a long-standing animosity towards photoluminescent (PL) exit signage, which relies on ‘glow in the dark’ materials to provide visible emergency exit signage in the built environment.

Typically, PL signs are charged by ambient light (daylight and/or artificial light with a CCT of 4,000K or greater) and are designed to offer a reliable (i.e. non-powered) way finding in the event of a power outage.

PL signs in well-lit environments can function without any power connections at all; and in poorly lit locations like emergency escape stairwells, ‘hybrid’ PL signs, which incorporate their own powered light source to keep signs charged, achieve the same ends.

The main advantages of PL signage, according to advocates, are:

As far back as 2014, LCA has alleged that PL exit signage possesses only a fraction of the luminance of conventionally powered signage, and suffers from numerous technical deficiencies to function adequately and efficiently in real-world situations.1

In its latest attack against PL exit signage, LCA made a public submission to the Victorian Department of Environment, Land, Water & Planning (DELWP) in mid-2018, following the department’s calls for submissions in relation to a revamp of its Victorian Energy Upgrades (VEU) scheme, formerly known as the Victorian Energy Efficiency Target (VEET) scheme. This scheme is an energy certificates-based program designed to encourage the installation of an approved list of energy-efficient products.

In its submission, LCA called for all PL exit signage to be excluded from the scheme. It was a bold ‘preemptive strike’, given that PL signage products had never been included in the scheme in the first place. Indeed, the entire PL product class had never been considered in the context of the scheme prior to this latest review process.

LCA’s submission was one of three submissions2 received by the department relating to PL exit signage. Apart from LCA’s submission, two entities – Energy Efficiency Council (EEC) and Genesis Now – made submissions supporting the incorporation of PL signage into the scheme.

Following consideration of all three submissions at the end of 2018, the department decided to exclude PL exit signage from the VEU scheme, as explained to Electrical Connection by a government spokesperson.

“Yes, the replacement of existing exit signs with photoluminescent exit signs was excluded from the VEU program as part of the 2018 regulation review process,” the spokesman said.

“The reasons for this exclusion were included in the document titled Victorian Energy Upgrades – Response to Consultation.3

“The public reasons given can be found on page 17 of this document, and include:

‘The department does not support the inclusion of photoluminescent signs as an eligible upgrade product, because this product cannot be defined as a stand-alone internally illuminated light source, would not meet the scope of Part 34, and requires charging from an external light source.’”

Asked if the department contacted any other PL-related companies or peak agencies before making its decision, the spokesperson said the department made no such inquiries:

In other words, given that the LCA’s submission was the only voice calling for the exclusion of PL signage from the scheme, and in light of the fact that no specialist PL-related parties were consulted, it seems clear that the department’s decision was based exclusively on the LCA’s submission.

Exclusion from the scheme is undoubtedly a body blow to the PL exit signage sector, not only because of its potential impact on sales, but also due to the stigma and confusion it casts on the PL industry as a whole.

Asked why LCA made its submission, LCA chief executive Richard Mulcahy said, “Our position has not changed since the Australian Building Codes Board (ABCB) Office proposed amendments to allow PL exit signage (ES) under deemed-to-satisfy provisions in 2014. Our objection is that they are fundamentally unsafe, particularly in evacuations in the presence of smoke. The signs are required to only be 1/260th as bright as traditionally illuminated exit signs, which is simply not enough light for safe egress. Building codes around the world acknowledge the extensive empirical data on the topic and rightly, do not allow PL ES as a substitute for illuminated exit signs.”

Richard described the LCA submission as “proactive”, inspired as a response to verbal comments made by an individual in support of PL exit signage at a DELWP event last year.

“The recent inclusion of the topic in our VEU scheme submission to DELWP was proactive,” he said.

“At a stakeholder forum event, one gentleman vocalised his opinion to DELWP staff that PL ES upgrades should be an eligible activity under the scheme and should generate the certificates based on the energy savings of completely removing a luminaire. Primarily, this would incentivise non-compliance.”

Scathingly, Richard added: “the VEU scheme has had a history of shoddy operators and seems to be tracking in a positive direction from a compliance stand-point.

“Introduction of an activity that would allow cowboys to make buildings unsafe is the last thing it needs.”

Photoluminescent Lighting Council (PLC) admits it was caught napping during the abovementioned submissions processes, and only became aware that PL ES had been addressed during the VEU scheme upgrade after reading a subsequent LCA announcement.

Nevertheless, PLC points out that PL ES are permitted in jurisdictions around the world, including Australia and NZ, and enjoy equal status with electrical signs in both Canada and the US. In fact, building codes in some of the world’s most tightly regulated localities, including New York City, actually mandate the use of PL ES in conjunction with electrical signage (as a precaution against failure of back-up batteries in powered signs).

PLC chairman and executive chairman of Ecoglo Australia, Trevor Dimond, says LCA objections to PL ES are unsubstantiated scientifically and represent nothing more than the protests of one industry group against another.

“They are an industry lobby group, just the way we are,” Trevor muses, adding that PL emergency ES has as much to do with ‘visibility’ as ‘lighting’.

Recent changes to the wording of the building codes in both Australia and NZ, he notes, reinforce this distinction: “If you look at both the Australian and NZ Building Codes, both used to have sections called Emergency Lighting, and both changed them to Emergency Visibility or Visibility in an Emergency (respectively) specifically to acknowledge that this is not all just about lighting.”

According to Trevor, the only current Australasian Standard pertaining to ES is AS/NZS 2293.1:2018, which was prepared by the Joint Technical Committee LG-007 and published in June 2018. Adherence to this Standard with conventional electrical ES is one means of upholding the emergency signage requirements of section E4.8 of the National Construction Code (NCC). Another means of complying with NCC provisions is via deemed-to-satisfy, or performance-based criteria. At present, reputable PL ES products are able to achieve deemed-to-satisfy compliance with all relevant NCC provisions.

Key NCC provisions, Trevor says, are as follows: “Specification E 4.8 establishes a minimum luminance level for visibility, which is 30 millicandela per metre squared (mcd/m2). It also says it needs 100 lux on the face of the sign, and there is a minimum duration period of operation, which stipulates that the minimum luminance level needs to persist for at least 90 minutes.”

Not content with being forced to rely on deemed-to-satisfy provisions, however, PLC is working with Standards Australia to create its own schedule of Australian Standards relating to PL ES.

Once completed, PL ES will no longer have to be assessed against standards written for illuminated signage, Trevor says enthusiastically. And, hopefully, parties involved in the drafting of the new standards will be fully qualified to address PL technical elements.

This undertaking, which began last year, is well advanced.

“In the last phone call I had before Christmas, we learned that the overarching compliance committee for Standards Australia had approved our proposal for work, so it’s gone over the first hurdle,” Trevor says.

As mentioned above, LCA has raised two main grounds for objection to PL ES: (1) poor luminance of as little as 30mcd/m2, compared with typical illuminated ES luminance of 8–15cd/m2 (hence the LCA’s reference to ‘1/260th as bright as traditionally illuminated exit signs’); and the requirement for a powered emergency light within 2m of an exit door – a dual-purpose illuminated exit sign itself can fulfil this specification, whereas a PL sign would need a separate (powered) light to be installed alongside it, effectively undoing any energy savings derived from the PL sign.

“So, how bright something needs to be in order to be visible depends on contrast with the background,” he insists.

“A PL ES sitting on a wall in a typical office will have more than, say, 20cd/m2 luminance (exposed to a minimum 100 lux) because it’s a contrast sign and that’s how much light is bouncing off it. When it goes dark, it… still maintains visibility because the background is that much darker and your eye notices the contrast. So saying a certain luminance is required for visibility is confusing because it’s actually luminance contrast that provides visibility.”

As for the requirement for emergency lighting to be positioned within 2m of an exit door, both Trevor and Mark note that this is no longer a requirement in NZ; Australia is the only jurisdiction in the world that continues to have this requirement, as there appears to be little scientific justification for its inclusion.

According to Mark, many of the world’s building codes base their emergency ES provisions on an international standard developed by US-based organisation Underwriters Laboratories (UL), which is a century-old safety consulting and certification company with 10,000 staff and representation in dozens of countries.

Standard ‘UL 924’ is UL’s international standard for the visibility of ES, and is code-mandated in countries like the US and Canada.

Electrical Connection asked UL’s principal engineer – lighting, Michael Shulman from California, to comment on both the candela-based luminance levels stipulated in Australian Standards, as well as the appropriateness of ‘visibility’ testing versus minimum candela levels. (See ‘It’s All About Visibility’ on p. XX.)

Michael’s assessment, as outlined in his responses, is that minimum candela-based benchmarks (above 8.6cd/m2) are based on “historical practice rather than a science-based determination of necessity”. Meanwhile, he notes that minimum luminance measurements, which were only ever designed to apply to 100ft viewing distances, are meaningless if they don’t also address visibility-based criteria of “contrast, uniformity and physical dimensions”.

PL ES are now appearing in greater numbers throughout the world. In Australia, businesses like Bunnings, VISY and Huntsman Polyurethanes have embraced PL ES, according to the Genesis Now submission to the VEU scheme, and the uptake has been keen in hospital, industrial and education facilities in both Australia and NZ. A large number of fire stations have also installed PL signage and other emergency visibility products in NZ, according to Trevor and Mark.

Unsurprisingly, business is booming: Trevor says Ecoglo’s turnover in Australasia has grown by 20%–25% per year for the past five years.

As the war between advocates of traditional illuminated ES and PL-based technologies escalates, it is important to rely on the science underpinning each claimant’s opinions. Arguably, LCA has done itself no favours by personalising its imperious criticisms of the entire PL ES sector with tags like ‘shoddy’ and ‘cowboys’.

One thing is for sure: these kinds of conflicts represent the ‘Dark Side’ of the wider lighting industry, and the sooner the LCA recognises the legitimacy of PL ES in specific applications, the better.

Steve Keil to step back from O’Brien ...