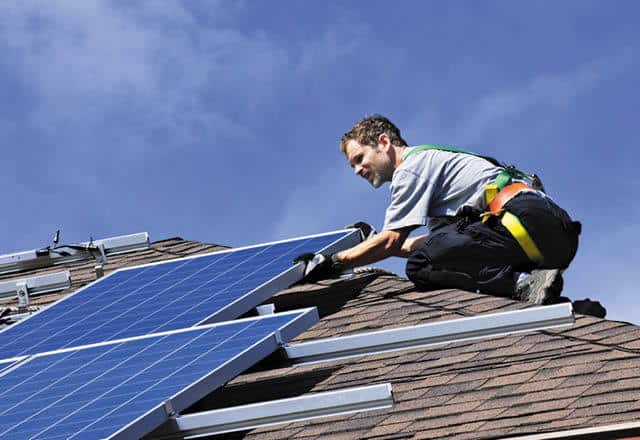 As ‘distributed generation’ increases, there’s work to be done on power quality by electricity suppliers and the solar industry. Phil Kreveld reports.

The growth of solar around the country is seen as a good thing, helping us towards a ‘greener’ world.

Although small roof-mounted systems account for about 2% of grid electricity, their maximum power is about 4% of national generating capacity.

The bulk of domestic solar is grid connected and, irrespective of feed-in tariffs, this is beginning to affect the power quality of distribution networks.

As the weather turns cloudy and solar energy production drops, the generators must supply the shortfall rapidly and devoid of network disturbance – that is, with minimal voltage sags and swells or frequency variation.

Distribution companies and energy retailers put some restrictions on commercial solar installations. Larger installations, of the order of hundreds of kilowatts, are generally required to have some battery storage so that demand is smoothed.

The prevailing method of limiting the influence of solar on networks is relatively unsophisticated. There are restrictions on inverter output voltage – typically 267V on the high side and 207V on the low side for single-phase systems – and there are anti-islanding requirements.

Voltage restriction is in principle a bad thing for householders who want to reduce their energy bills. For example, when voltage rises to the upper limit during periods of intense sunlight, most inverters disconnect from the grid and cease operation.

Thus upper voltage limits are a problem in many urban situations where lots of solar installations are connected to a local transformer.

Rather than looking into possible supply problems and seeking engineering solutions, supply authorities tend to dictate the maximum solar power to be connected and impose strict voltage excursion limits.

Three-phase installations fall into a different bracket: they are generally installed in consultation with a supply authority.

Voltage regulation and power factor effects are genuine concerns, and we are in the early stages of these problems. In addition, federal and state governments are unlikely to have electrical engineers among their members.

Moves to reduce the renewable energy target (RET) can be seen as ‘enlightened’ by generators, transmission and distribution networks. However, the time has arrived for a more informed approach to feed-in problems.

One of the main concerns for power suppliers is that solar installations basically do not supply reactive current – that’s a task for the network. Smart, four-quadrant metering notwithstanding, there are no apparent demand tariffs, and imposing them would be a political hot potato.

It is therefore not surprising that feed-in tariffs have fallen. It has all become too hard, and a low reward for installing solar is one way of slowing the creep of connection problems.

As more solar power is fed back into the network, the proportion of reactive power to net kilowatts becomes larger – in other words the power factor worsens. Network calculations are complex and outside the scope of this article, but in general, poor power factor worsens voltage regulation.

Price pressure on domestic solar installations has made them increasingly affordable but not necessarily more sophisticated. They answer to Australian Standards requirements for their basic performance and safety aspects.

As penetration increases, more features will be necessary in order to connect to the grid. An obvious one is battery storage.

Lithium-ion battery storage is still expensive, but longevity and reliability are steadily improving. The control algorithms have been developed for ‘peak shaving’, whereby excess energy on sunny days is diverted to a battery system.

Power factor is basically controllable via inverters, although it may not be not immediately obvious. There is also confusing information regarding the type of inverter to be used for this purpose – current based or voltage based.

To control power factor, the phase angle of the current supplied to the grid must be compared with grid voltage, hence the usefulness of a current-based inverter. However by putting reactive impedance between the voltage inverter and grid connection point, a quasi-current generator has been produced and phase comparison between current and voltage can take place.

Domestic PV systems use maximum power point tracking (MPPT) on the DC side. Irrespective of the algorithm (although it is often the ‘hill climb’ one), there is a DC to DC converter supplying the DC link of the inverter.

The inverter, as a rule, has a lower rating than the solar panel so that the system has adequate power output control. The inverter pushes out unity power factor energy and, as already stated, therein lies a problem for power distributors.

A better approach is to more closely match the inverter to the PV panel by making the power point tracking operate directly on the inverter rather than on the DC link. This approach is available on some three-phase inverters. In one such system, the power available is – as would be the case in DC to DC converter systems – the product of panel voltage and current.

Using fuzzy logic semantic rules in conjunction with ‘hill climb’, a PI controller compares actual DC bus voltage and the reference generated by the MPPT and provides an active current reference. This reference is ‘attached’ to the grid voltage phasors and is part of a d-q transformation (Park transformation), similar to that used in active harmonic filters.

The inverse of the transformation generates the required phase current.

How serious is the feed-in problem likely to become? It’s not in our brief to make forecasts.

The Clean Energy Council provides list of compliant inverters suitable for renewable energy certificates (RECs). Mainly, inverters have to comply with AS4777. For systems between 30kW and 200kW, compliance with IEC62109.1 or IEC 62109.2 is specified.

The index for the Standards reveals nothing on power factor. For power above 200kW, the above IEC Standards or VDE AR-N4104 is specified.

The German specification has sections pertaining to influence on the grid, and these are specified by VDE AR-N4105 in regard to frequency stability – including photovoltaic installations.

The Standard says they need not be completely disconnected from the grid on reaching an over-frequency of 50.2Hz, but there should be a smooth transitional zone between 50.2Hz and 51.5 Hz, within which the installation may continue to feed in power at a reduced capacity.

This new application guide also affects existing plants with outputs of more than 10kW peak, and they need to be upgraded accordingly. We lack these requirements here, but individual distribution authorities (in particular in South Australia) enforce their own rules and provide for additional protection – for example, anti-islanding relays and phase loss relays in the sub-distribution network.

There may well be an increase in multi-mode inverters in the near future. Rather than ceasing operation when the upper voltage limit is reached, the control circuitry reduces energy production.

However, one unavoidable scenario is the presence of multiple inverters on the same sub-distribution circuit. Depending on the impedance of sections between the inverters, the practical effect may well be that ‘imposed’ voltage knocks out other inverters.

It seems some spade work must be done by supply authorities and the solar industry, irrespective of RET outcomes, as the penetration of ‘distributed generation’ grows.