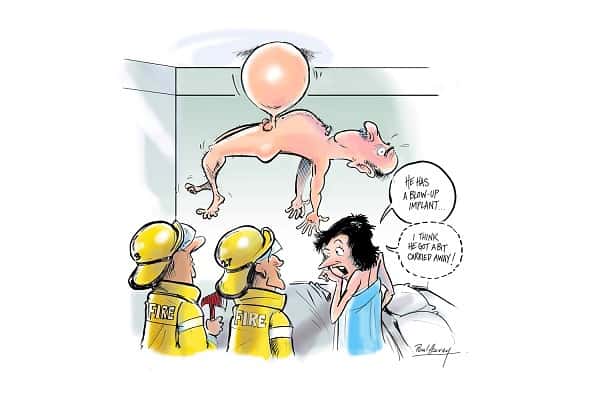 As Bill heads out the door of my consulting room with prescription in hand for his various ailments, he stops, turns and mentions: “Oh, by the way Doc, I’ve been having a bit of trouble getting it up lately so we might look at that a bit later.”

The doctor’s heart-sink hits me like a sledge hammer. I can’t let that one pass. Knowing that Bill is not great at regularly getting a check-up I call him back in as that issue needs attending to.

The dreaded ‘ED’ or erectile disorder is a common issue; however most men are reluctant to bring it up in their GP consultation. And when they do, it is often as a passing comment at the very end of the visit as they are about to leave the GP’s room. And it certainly can’t be just passed off as a minor disorder as it may be a sign of an underlying heart problem. Simply, if the blood isn’t getting into the penis when it should then it may also be struggling to get into your heart, brain or kidneys. Thus it warrants an overall general cardiovascular check-up.

It is a very common and distressing condition for blokes and their partners. ED is defined as the inability to get or sustain an erection to enable satisfactory sexual intercourse. It seems to have replaced the old diagnosis of impotence. It gets worse with age and studies have shown it to occur at some time in about half of males between the ages of 40 to 70 and all of the time in 10% of males in this age bracket. It is a very complex condition which is influenced by various psychological, neurological (nerve), vascular (blood vessel), endocrine (hormone) and anatomical (structure of the penis) factors.

What are the causes?

An erection firstly needs a brain, as well as a perception of sexual awareness through thoughts and the senses. The brain is influenced psychologically by problems such as depression, relationship issues and performance anxiety which may affect erectile ability – as could any neurological disease or injury. The brain can also come under the influence of circulating chemicals in the blood – the most common being alcohol – but other drugs, be they prescription or illicit, may reduce erectile performance.

From the brain, signals are sent down the spinal cord via nerves to the small arteries going into the penis. The nerve signals cause these arteries to dilate and allow blood to rush into the penis causing an erection. So, nerve conditions and diseases with a nerve affecting capacity such as diabetes could dampen erectile capacity. The penile arteries are only a half millimetre in diameter so it doesn’t take a lot to block them off. The main coronary or heart arteries aren’t a huge deal bigger at three to five millimetres in diameter and they branch down to smaller and smaller arteries. Thus, the same issues that may affect your heart such as cholesterol, high blood pressure, smoking, obesity and diabetes, could also result in blockages to the arteries going into your penis, hence the connection between heart disease and erectile disorder. And may I add, hormonal problems are a rare cause of this condition and there is no direct connection with prostate problems.

What will your doctor do?

Your doctor will take a history of the problem including a sexual history. With or without partner? It is certainly a problem affecting both parties and I’m happy to hear the other side of the equation but I don’t think that it is essential … initially.

In my experience, most blokes perceive the problem as being their problem and rarely bring their partner along, or are rarely brought along by their partner for this condition. If, however, there was a hint of a heart condition, such as chest pain … “come with me mister, you are off to the doctor!”

I think if a few more females read this article and learn of the connection between ED and heart disease there could be a few more blokes on my doorstep.
A general examination will be done, particularly looking at the cardiovascular system – the heart and blood vessels. Some blood tests will be done such as your cholesterol, blood sugar, kidney function and perhaps your male hormone or testosterone level, as well as a PSA (blood prostate check) if it hasn’t been done in the last 12 months.

What treatments are available?

After having had a thorough physical examination to exclude a physical cause then certain areas need to be addressed. The psychology of sex is a complicated area for which books have been written. In my experience, most blokes don’t want to delve too far into that area. Suffice to say that a happy and contented brain is more likely to send good signals down to the nether regions than a stressed and anxious brain and counselling may assist this.

Lifestyle issues also need to be addressed such as smoking cessation, regular exercise, less alcohol, stress management and weight loss. These are all pivotal in management and essential for overall good general health.

And then there are the drugs – Viagra, Levitra and Cialis. These drugs have been a fantastic addition to our armoury in assisting men with ED. Viagra was the first and most publicised drug and first became available in 1998. And what about all the jokes that accompanied its arrival! It was launched by the pharmaceutical company Pfizer, and was affectionately known to GP’s as the ‘Pfizer Riser’!

They work by increasing the level of nitric oxide in the blood which is a potent vasodilator (sweller). This then opens up the little arteries in the penis. It is that swelling of arteries that also contributes to the main side-effects of these drugs, namely headache, dizziness, facial flushing and nasal congestion. They can also dangerously drop your blood pressure and must not ever be taken with a class of drugs used for heart pain or angina called Nitrates. Speak to your GP about this. There are some ‘party drugs’ that have nitrates in them and the combination with an ED drug is potentially disastrous. The main message is to get the medication off your GP and don’t take any other drug unless given the all clear by your GP.

Will they need to be taken all the time? Not necessarily. I find, particularly when there is a psychological element, one or two doses may lift the performance anxiety and enable nature to once again take over without the need for medication.

Do they work with everyone? No unfortunately, and then other options need to be looked at. There is a drug that can be inserted up the eye of the penis into the urethra and another that can be injected into the base of the penis. Beyond the drugs, there are vacuum restriction devices and even blow up penile implant devices. These options can be discussed with your GP.

Thus, erectile problems shouldn’t be considered hush-hush as it could potentially signify a more serious underlying problem, but also, it is eminently treatable these days.