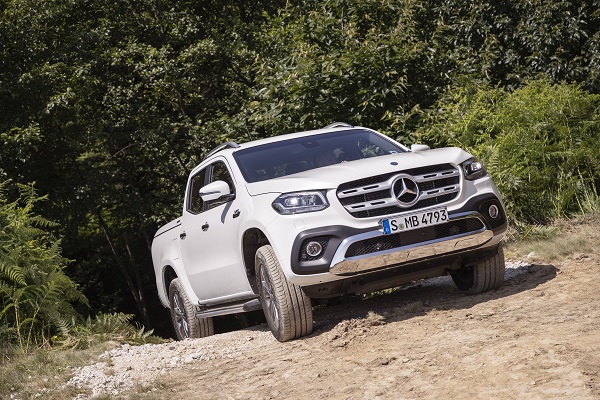 Whereas the four-cylinder versions rely on Nissan-sourced turbo-diesel powerplants, the X350d, as the luxury brand’s V6 ute is known, uses Mercedes’ own 3.0-litre single-turbo oil-burner that develops 190kW of power at 3400rpm and 550Nm of torque from 1400rpm through to 3200rpm.

It is paired exclusively with Benz’s 7G-Tronic Plus seven-speed automatic transmission (with steering wheel shift paddles and a fuel-saving automatic engine idle-stop feature) and drives all four wheels on a full-time basis via the German manufacturer’s 4Matic permanent 4WD system with low-range reduction gear and a rear differential lock.

These are all important additions as they help further differentiate the X-Class from its donor vehicle, the Nissan Navara, which uses the same four-cylinder engines and other powertrain and driveline components – but has no access to Mercedes’ V6.

Provisional figures based on European spec indicate that the X350d will have a 2285kg kerb weight and 965kg payload, based on its 3250kg gross vehicle weight (GVW). It can accelerate from 0-100km/h in a claimed 7.5 seconds, and return combined-cycle fuel economy of 9.0 litres per 100km.

As well as the rear diff lock, the 4Matic system includes a centre differential that distributes torque between the front and rear axle on a 40:60 per cent ratio during normal driving conditions. There are three drive modes: the road-oriented 4MAT, which continuously varies torque distribution; 4H, which locks in a 30:70 front/rear split and is better suited to low-traction off-road surfaces; and 4L, which holds firm at 50:50 for use in tougher crawling-speed conditions.

Off-road stats point to 222mm of ground clearance, a fording depth of up to 600mm, approach/departure angles of 30/25 degrees respectively, ramp breakover angle of up to 22 degrees and a maximum tilt angle of up to 49 degrees.

While generally mimicking the high level of specification with the equivalent four-cylinder variants, the X350d has arrived with a more sophisticated “active” lane keep assist system, meaning it will apply the brakes automatically and manoeuvre the vehicle back into position if the driver unintentionally veers out of a lane. This is a step up from the current system which uses only pulsed vibrations through the steering wheel to warn the driver.

The extra power, performance and detail points on the features list require an extra outlay of about $15,000 for both variants compared to the equivalent four-cylinder automatic Progressive or Power 250d.

These use a 140kW/450Nm 2.3-litre twin-turbocharged diesel engine with a seven-speed auto and part-time 4×4 system – a set-up that can send the vehicle to 100km/h in a claimed 11.8 seconds. Fuel consumption comes in at 7.9L/100km. (They also have a six-speed manual option and, on Progressive, a cab chassis rear end.)

A factory bullbar and nudge bar is also understood to be in development.

As per Navara, the X-Class has a ladder-frame chassis with independent double-wishbone front suspension and multi-link solid axle at the rear – coil springs are used at both ends – along with ventilated disc brakes at the front and, in a departure from its donor vehicle, vented discs at the rear, too, where the Nissan uses drums.

It rests on a 3150mm wheelbase and measures 5340mm long, 1920mm wide and 1819mm high. Mercedes also says that the 1215mm width between the wheel arches in the load bed allows the stacking of an Australian-size pallet.